The president and state governors face challenging decisions. The nation and world sits between a Rock & Hard Place. Should we reopen our economies or continue to hunker down to protect our most vulnerable? Difficult questions and few easy answers.

Hawaii’s Lt Governor bases his re-opening calculations on a One in One Thousand infectious rate. I claim he’s off by a factor of ten at minimum. Rather than use tests “just to weed down five or 10 cases,” we’re looking at an additional 50 to 100 cases per day if there are some 8,000 new arrivals. Dr. Green risks our lives.

Last Friday the government released the September jobs report. Millions of Americans are out of work due to C19. Hawai’i is a national leader in unemployment. If the report shows employers added 150,000 or more newly-created jobs, we consider the month a success. For President Trump, this was the last report prior to the November election. Good economic news helps the president’s chances of re-election. Surveys suggest attention on C19 drags him down.

How about you? Did you hear about the jobs report or the president’s positive C19 diagnosis? Exactly! Few heard employment numbers. It was a phenomenal month — epic, landmark! Yet invisible to most!

Employers added 661,000 jobs in September, pushing the unemployment rate down to 7.9% from 8.4%, the U.S. Bureau of Labor Statistics said in its latest employment report.

What most Americans take away from the recent events is a disaster for the president. This past week will be remembered as the Mother of All October Surprises. Surveys suggest support for challenger Biden over incumbent Trump has now doubled.

President Trump has been reckless facing the virus. He flaunted mask and social distancing protocols, and has now become a super spreader. The White House and GOP are in defense mode days before the “most important election in our lifetime.” Democrat leaders in Hawai’i are equally clueless.

UPDATE 10.6.2020: Hawai’i island Mayor Harry Kim said he is opting out of the state’s pre-travel testing program starting Oct. 15, which means mainland visitors going to the Big Island still will be required to quarantine for 14 days.

October 15th, Governor Ige and Lt Governor Josh Green open travel to the Aloha state with a non-quarantine option. Travelers who receive a negative C19 test 72-hours prior to arrival will be exempt from the current 14-day self isolation mandate. New Mexico DOH shows travel is the leading source of coronavirus spread. Hawai’i opens travel; but continues to lock down gyms. Backassward!

Hawai’i also has many loopholes in protocols: See THIRTEENTH PROCLAMATION RELATED TO THE COVID-19 EMERGENCY, §6 Defenses. (4) Is otherwise exempt from the self-quarantine requirements. Our line of C19 protection is a wall of Swiss cheese.

The government’s tourism plan contains many flaws. See Aloha Challenge: Come to Hawaii and Kill a Local. First, Hawai’i will require a negative test within three days (72 hours) prior to travel. However, incubation period (below) from exposure to infectious state ranges from two (2) to fourteen (14) days with an average of five (5) days. 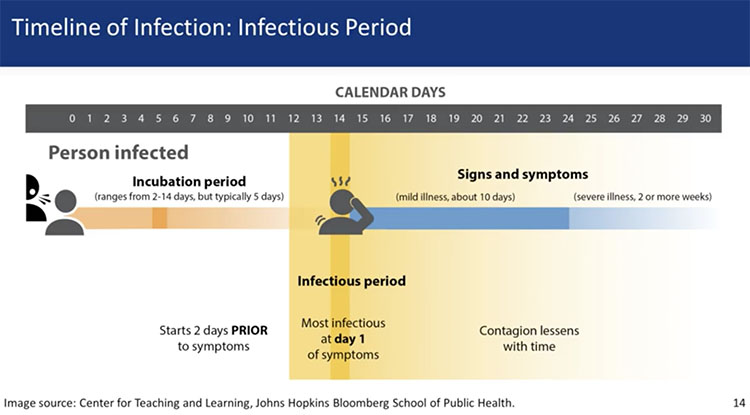 This means an individual can be exposed to C19 Monday, test for C19 Tuesday, receive negative results Wednesday, depart for Hawai’i on Thursday, and have no visible symptoms when arriving later that day. The new visitor might begin infecting local residents and service industry staff Friday, while incorrectly believing she’s non-infectious. Deadly and Dangerous!

Second, tests are known to be unreliable. More thorough assessment, molecular tests, such as PCR tests, viral RNA tests, nucleic acid tests, are highly sensitive. These include nasal swab or saliva collection methods and generally take a day or two to return results. A positive test almost always means the person is infectious.

However, tests can report negative, i.e., false negative, especially for people who carry the virus but have no symptoms. False negatives also occur not from test deficiencies, but from poor samples, which can be difficult to collect with nasal swabs.

United Airlines will offer a rapid Abbott ID NOW COVID-19 test beginning October 15th, by GoHealth Urgent Care and their partner Dignity Health. Travelers receive results in approximately 15 minutes.  Other rapid molecular or RT-PCR tests include Cobas by Roche, Cue COVID-19 Test by Cue Health, Xpert Xpress by Cepheid and Accula by Mesa Biotech. None of these tests are officially approved by the FDA — only emergency exemptions at this time.

There aren’t precise measures of accuracy for these tests. Most have sensitivity anywhere between 50% and 90% — one in two infected people might be told incorrectly they don’t have the virus. Combining inaccuracy of tests with lengthy incubation periods for C19 means many infectious travelers will slip through undetected.

Travelers can also be infected during long flights. Although airlines claim their cabin air is filtered safely and rapidly, a sneeze or cough can propel deadly pathogens at least two rows forward and backward.

False negative tests provide false reassurance, and may lead to delayed treatment and relaxed restrictions despite being contagious.

That means around 20% of any visitors with COVID-19 could arrive in Hawai’i without the virus being detected.
Ray Vara, president and CEO, Hawai’i Pacific Health

Tahiti is similar to Hawai’i. Officials declared the island “COVID free” when they reopened July 15th using a pre-flight test within 72 hours of departure, no quarantine, and a second self-administered test on Day 4. Failed miserably. C19 spike began three weeks after the reopening, with more than 1,300 new cases in the last month.

Chad Taniguchi and Dr. Lee Evslin report local unions now threaten to strike if the 14-day quarantine isn’t reinstated. Tahiti’s population is under 280,000 and much easier to manage than Hawai’i with five times the number of inhabitants.

One in One Hundred Infectious Arrivals

Hawaii’s Lt Governor and part-time emergency room doctor, Josh Green, bases his projections claiming ONE in One Thousand arrivals will be C19 infectious, as most will have been tested for C19 before they arrive. There is limited scientific evidence to support his assumption.

WHO released today they believe 10% of the world’s population has been infected with the virus. Their “best estimates” now indicate there have been more than 20 times the number of confirmed cases. Based on WHO’s figures, for every identified known infectious case, there are 20 additional people who unknowingly spread the virus. Therefore, a more reasonable estimate of the Lt Governor’s calculation would be One in One Hundred arrivals or 1%.

Governor Ige is considering a request from Kaua’i Mayor Derek Kawakami, similar to the Tahitian proposal, to allow the county to require incoming travelers to quarantine for 72 hours and then pass a second test to end the 14-day quarantine.

Although a good friend, Lt Governor Green recently unfriended me on social media for criticizing his performance. He also objects to Mayor Derek’s request in a discussion with Kimberly Caldwell:

“No one will travel there (to Kaua’i). If that is the goal then say that openly. Alternatively, the risk is 1/1000 traveler or less based on prevalence. If we can’t manage that then we’ll never survive.”
Lt Governor Josh Green

History of Hawai’i and C19 documents the government failure to safely manage this pandemic. Begged Dr. Green to #MaskUp the population beginning in March. Ignored my daily requests. It was September before government finally mandated face masks on public transportation. See America’s Political Reps are KILLING Us

StarAd reported today Oahu’s reopening metrics are so restrictive even the return of only a few thousand tourists might be enough to upset the fragile balance and keep the island from further economic reopening. We’re still in “economic lockdown and people are suffering badly.”

If Hawaii Pacific Health president and CEO Ray Vara is correct, reopening tourism October 15th will lead to at least a 20% increase in C19 cases. This means additional deaths and lockdowns for local people.

“The idea of a second test which would take 8,000 tests for us rolling every day, when we only have 4,000, is problematic for many reasons. One, it would be extremely high yield. It’d be doing that just to weed down five or 10 cases, instead of using tests on people who are close contacts, who really would spread the disease.”

The Lt Governor bases his re-opening calculations on a One in One Thousand infectious rate. I claim he’s off by a factor of ten at minimum. Rather than use tests “just to weed down five or 10 cases,” we’re looking at an additional 50 to 100 cases per day if there are some 8,000 new arrivals. Governor Ige and Lt Governor Green risk local lives. 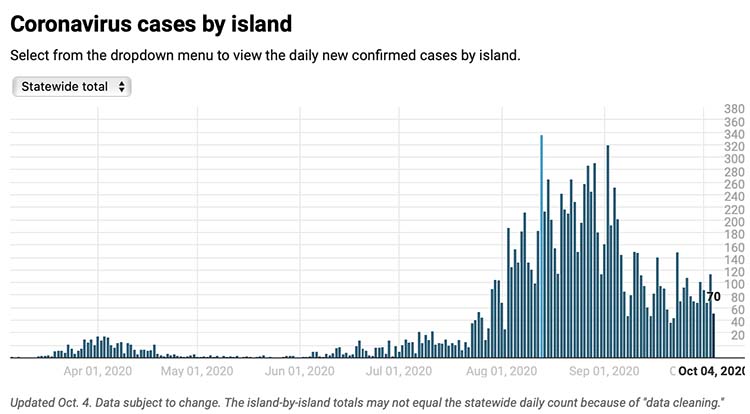 President Trump is reckless and stupid. Likely this will cost him re-election. Governor Ige and Lt Governor Josh Green are deadly and dangerous. Residents of Tahiti know what happened when their government failed them. Pacific Islanders especially, and other residents here in Hawai’i continue to suffer their incompetence. Covidiots!