I wanted to begin by thanking you for your collective action this week to pass strong regulations on O’ahu vacation rentals. The disrespect of these beautiful lands by short-term profit seekers must be challenged at every step. Unfortunately, my praise ends here.

I realize I represent nothing to local people — except an annoying haole malihini. Yet I learned years ago from travels around the world, as well as from those who visited me in my homeland, that guests frequently appreciate far more what long-term residents tend to forget.

You have forgotten YOUR keiki and youngsters. You are also contributing to the war on the American people by demonstrating a complete lack of courage and understanding of the challenges that face this beautiful city and most glorious islands in this state.

I notified my councilmembers on sleepy, remote Kaua’i earlier this month of the impending epidemic and disaster afflicting The Garden Island. I know few have much public health experience. See Emergency Public Health Report.

None have responded — as it is fashionable in the islands for elected officials to conveniently and uncivilly ignore polite requests of those they are sworn to represent and serve. It follows the history of arrogance displayed by the absentee land owners who controlled the Provisional Governments of previous eras.

In fact, Kaua’i councilmember Felicia Alongi Cowden is now so terrified of my watchful eye she violates the First Amendment to the U.S. and Hawaiian Constitutions to prevent me from following her social and political commentary. What great insecurity she displays — second only to despicable Don in the White House.

She falsely believes she wins — while harming the keiki on the island and the community she claims to love. Courage is bold. She displays neither.

You are a far more sophisticated bunch. And, now, you say nothing as you watch your young people suck down vaped poison at increasingly rapid rates and higher concentrations.

Thousands of explosions and fires
One study published in 2018 estimated more than 2,000 e-cigarette explosion and burn injuries sent users to US hospital emergency departments from 2015 to 2017. Few eCig users are aware of how serious the incidents can be. And, today, headline on CNN: 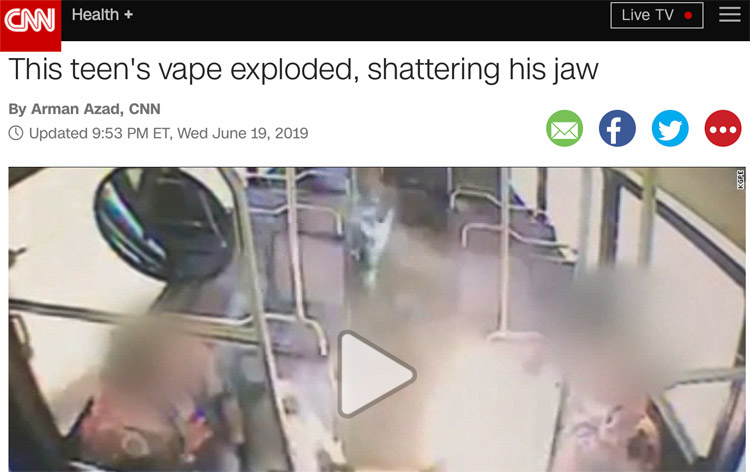 How is it possible you allow our youngsters to do this to their health right in front of your eyes? I show a picture of a Palestinian family dear to me. I helped raise their beautiful children.

Around 2010, I told the young man in the middle, Hussein, I could no longer consider him my brother for peddling vaped nicotine to anyone over 18.

He is such a bright human being. There are 1,000s of ways for him to make money. Dealing this addictive poison to unsuspecting people is a crime of unforgivable injustice. This is the next chapter in the Tobacco Wars.

Cigarettes were only popular due to the nicotine high. Smoking the tobacco leaf still kills over 400,000 Americans each year.

Today, due to technology, we import unknown nicotine concoctions from nations like China and Mexico that directly mainline nicotine to the brain and central nervous system. We have no idea what the long term use will do to our people. Yet we are certain this is a highly-addictive habit.

We are also certain nicotine is a deadly poison — an insecticide that forms naturally in the tobacco leaf for the sole purpose of killing critters who munch the leaves. And, my careless city councilors, human beings are critters.

San Francisco supervisors passed legislation banning vape and eCig sales this week to stand up to profits before people. Are they smarter than you? Do they care more about their children than do you? I would have thought not. Please tell me I am wrong.

This is the land of pakalolo. Brudder Iz wrote beautiful music and blessed many kanikapila evenings with the Makaha Sons of Ni’ihau infused with herbal righteousness. Did the Fearless Eyed Man belong in federal prison?

Which one of you has the temerity to make such a vulgar claim on the ashes spread over these waters? Now a Black male from the east coast leads where you cower:

“The War on Drugs has been a war on people, tearing families apart, ruining lives, and disproportionately affecting people of color and low-income individuals — all without making us safer.”
Senator Cory Booker

Senator Booker followed up, “As president, I will act immediately to right these wrongs, starting by initiating a clemency process for thousands of nonviolent drug offenders who have been handed unjust sentences by their government.”

For some 40 years, the U.S. government and state of Hawai’i have arrested and thrown millions into our jails and prisons, yet you allow youngsters to vape nicotine without a concern.

While permissive on deadly nicotine, none of you have offered me the courtesy of one simple response from my daily emails after Hawaiian Electric Industries (HEI) CEO Constance Hee Lau terminated me after six months of service excellence for being an active medical cannabis patient.

I am one of just some 25,000+ patients — your constituents on this island — many who are Veterans. We matter not at all to you.

Although I hold seven (7) certifications from the University of New Mexico School of Medicine warning me and America of the dangers of opioid pain analgesics, and training of dangerous and highly-addictive nature of opioid drugs, the elected officials of the people of this islands did not have the courage to make a simple phone call on my behalf to a woman with only a banker’s degree.

Not even your former Council Chair, current Vice-Chair, Ann Kobayashi, who I treated with dignified humility and respect at the delightful Mahalo Dinner for candidate Lynn Mariano, would offer a simple word of compassion or demonstration of leadership. How cruel. So intensely all of you must despise any who come to serve on these islands.

I ask any of you to give me the name of just ONE American or resident of Hawai’i who has died from cannabis overdose. Just one!

State Senator Roz Baker (D-Maui) works day and night to prevent medical cannabis patients from having access to an edible cannabis product — expressing to me her alleged sincere concern for keiki and pets. She says nothing about allowing youngsters to vape a product more deadly than RoundUp. What is wrong with elected officials here?

Senator Baker’s committee blocked legislation to allow medical cannabis edibles. This forces us to smoke flower or vape oil, for example. I begged her to allow the legislation to go to the full senate. I explained to her that she was negatively affecting our health.

Is full of lots of inaccuracies, misinformation and smears. You don’t know me or understand the process. I’m sorry you’re in pain and hope that cannabis can help you. I wish I had a magic wand to singlehandedly fix the things that vex you the most. Unfortunately I don’t.
Best regards, Roz Baker, February 10, 2019 at 6:08 PM

“Aloha Senator Baker,
I truly appreciate you took the time to respond. I respect you for that! Thank you!”

I can get “illegal and home-made cannabis edibles” anywhere on island. How does one know potency? We risk overdose. Children can get these as well. Denying legal products doesn’t protect children; it only harms legitimate patients.

Scott,
I’m trying to expand access and I don’t want children adversely affected because they get product not meant for them … I have advanced measures to make sure that just because someone has a 329 card they are not discriminated against in the work place.
Aloha, Roz, February 10, 2019 at 11:04 PM

I have a 329 CARD and was FIRED by HEI CEO Constance Hee Lau on February 25, 2019 — just two weeks after Senator Baker promised she was working to ensure people like me are not “discriminated against in the work place.”

Both of these “remarkable” women of Hawai’i have made it clear to me I am nothing more than dog doodoo. Together, they would prefer to send me to the Grave Where One Is Buried Alive. Yet why do you allow them to poison your children?

Please, O’ Great and Illustrious Councilmembers of Honolulu, why do you allow your keiki to be poisoned on the one hand and thrown in federal prison on the other?

Is this the example of aloha for your ‘Ohana and kuleana to your race?