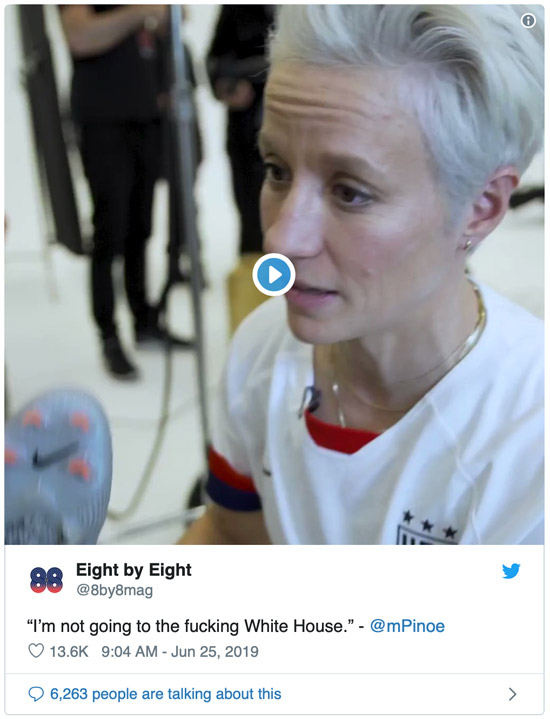 Megan Rapinoe, co-captain of Team USA: “I’m not going to the fucking White House,” when asked if she was excited about the prospect of such a visit during an interview with Eight by Eight magazine.

Confident, strong and positive leaders would say, “I would look forward to an opportunity to visit the White House. I don’t always agree with our current president, but I hope we can find common interest for the sake of the American people. This is the power of sport and global competition.”

“We haven’t yet […] invited Megan or the team, but I am now inviting the TEAM, win or lose. Megan should never disrespect our Country, the White House, or our Flag, especially since so much has been done for her & the team. Be proud of the Flag that you wear. The USA is doing GREAT!”
President Donald Trump

Due to Rapinoe protesting on the pitch, U.S. Soccer Federation amended their regulations in March 2017 to require all players to “stand respectfully” when the national anthem is played at games.

All persons representing a Federation national team shall stand respectfully during the playing of national anthems at any event in which the Federation is represented.
U.S. Soccer Federation

Rapinoe protested inequality in America by kneeling while the anthem played at least three matches last year.  This is somewhat hypocritical. She and her team demand more money for pampered, privileged athletes — not poor Americans — and as shown below, women athletes receive a higher percent of revenues than do men.

SIDENOTE: Golden State Warriors injured star Kevin Durant declined a $31 million option on his contract today. According to ESPN, as a free agent, he can now accept a five-year, $221 million contract with the Warriors, or a four-year, $164 million deal with another team. This is over $40 million per year.

American athletes are truly suffering when some 40% of Americans do not have $400 to their name in case of a family emergency. [more]

Coach Jill Ellis for the women’s team is supportive of the rule change, “I’ve always felt that that should be what we do, to honor the country, have the pride of putting on the national team jersey. I think that should be the expectation.”

Sadly, USA Women continue to embarrass and disrespect our nation. Their lack of sportswomanship against Thailand will for generations cast a dark shadow over the USA’s most privileged women in the world. I show here they now sue and greedily demand more money for their services than fans and sponsors are willing to pay — compared to men.

Thailand has only a soccer sports program in infancy. Most people, particularly women, work 2-3 jobs — hard jobs of physical toil each day — to earn a simple bowl of rice.

My friend, Jenny Lang Ping, and I earned a silver medal in Atlanta ’96 coaching the Chinese Women’s Olympic Volleyball team. Athletes in China expressed daily their gratitude to be on the national squad. They stayed in college-type dorms and received daily training table nutrition.

They were not compensated except for small stipends to provide toiletries and other basic necessities. Yet they lived 100% better than most young women in China. They were eternally thankful for their opportunity. I enjoyed every minute of my volunteer service.

USA Volleyball hired Jenny to coach the American women for Olympics 2012. She hated the experience. I visited her in Colorado Springs when they hosted Brasil’s national team for a weeklong session preparing for the upcoming games.

The American women didn’t want to practice. Jenny had to coordinate their limited training schedules with their agents, lawyers and family members of the prima donna, privileged princesses.

The Brazilian women on the other hand were humble, tremendously dedicated and hungry to win. I was delighted when my favorites, Paula and Jaqueline, along with Sheila, Dani, Fernanda, Thaisa and Fabiana took home the gold in London 2012. Jenny returned to China in 2016 and earned Olympic gold with her home nation.

On March 8, 2019 members of the U.S. women’s soccer team filed a lawsuit against U.S. soccer, accusing it of gender discrimination. The lawsuit alleged the organization has given “only lip service to gender equality.”

As the professional U.S. women easily beat the high-school-level ladies from Thailand, supporters and leading elected officials claimed this justifies increased salaries for the women. They say it is unfair men receive more. 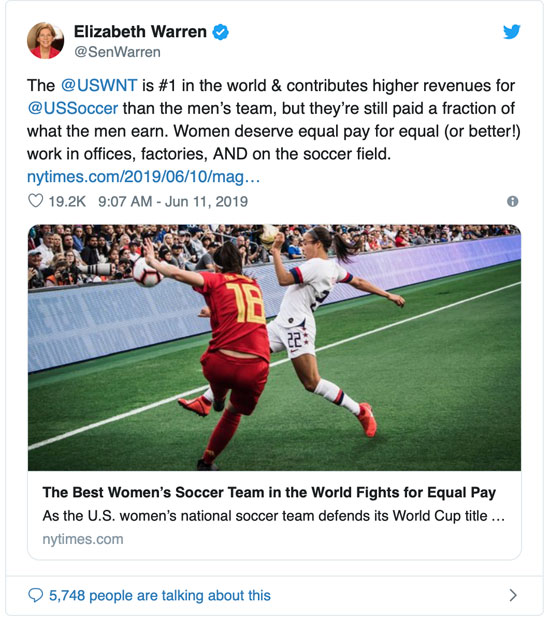 How should pay be determined? Do we pay each player $50,000 for example? Should I be paid the same as Michael Jordan, LeBron James or Steph Curry? Or should players earn more if they are more successful, their team is more successful, and their league is successful?

Comparing the pay of the men and women athletes relative to the amount of revenue their event generates, one sees women players receive a higher percentage of the event’s earnings than men. In 2011, the payout for women’s event was $10 million. This would mean female players earned 13 percent of total revenues. [source]

In 2010 total men’s prize money was $348 million, that is nine percent of their tournament’s earnings. It was even worse for men in 2014 when they received seven percent of the revenue.

Using the $2 million the American women received as a baseline, and adjusting team prize money based on amount of earned revenue in both the men’s and women competitions, the German team should have received $61 million, not $35 million.

Men’s teams generated 31 times more revenue than did women’s — yet were paid only 17.5 times more. Women receive more money than men by percentage of what fans are willing to pay. Shouldn’t fans decide?

Fans and sponsors VOTE with their dollars, euro, pesos, lira, yen, ruble, franc, mark and real. Shouldn’t men and women be treated equally? Why do women sue and demand more than their fair share?

This behavior has led our family not to support Team USA or women’s World Cup this year. We generally purchase monthly packages on YouTubeTV. Due to this uncivil and unsportswomen-like character, we voted NO this year.