I sounded the alarm about poor management a year ago. ValueAct CEO and Hawaiian Electric investor, Jeff Ubben, seemed to hear my concerns and followed up claiming senior management sucked, while demanding total restructuring. His report shattered the executive board and chaos reins at the top. I was fortunate to work with some truly awesome, talented and competent professionals. Love them all. Connie’s board remains the weak link.

CEO Lau is not an engineer nor does she demonstrate proficiency in personnel policy or love for the land, ‘aina in Hawaiian. Residents suffer the highest energy costs in the nation. Connie’s solution is to cover the ‘aina with some 15 million solar panels in a hurricane zone.

KIUC on Kaua’i recently opened a solar farm filled with about 56,000 panels. Silicone, plastic and metal as far as the eye can see. Under Connie’s direction, other islands will deploy nearly 300 times this amount.

With a background in engineering and solar technology, I’ve pleaded with elected officials and warned residents. These are 25-30 year projects built into perpetuity. Next to people, the ‘aina is Hawaii’s most valuable asset.

How much is an acre? Hard for most people to visualize. Many of us are familiar with football. Field is about one acre in size (1.3 acres with end zones to be precise).

CEO Connie Lau and her bankers propose 3,000 acres of silicone to cover Hawai’i. This is over 2,300 football fields. From mauka (mountain) to makai (sea), we will see only silicone, plastic and metal overwhelming our flourishing and beautiful green spaces. With all the environmental damage, this provides energy for only 200,000 homes.

Hawaiian Electric expects to have about 30% renewable energy production by the end of this year and claims these proposed projects will add another seven percent (7%) to the renewable energy grid by 2023.

To achieve 2045Goal of 100% renewable energy, Hawaiian Electric will need to deploy two or three times this number of panels. We’re talking somewhere around 5,500 to 7,500 football fields of solar panels from sea to shining sea.

Contingent Valuation is an economic method of estimating the value a person places on a good. Imagine currently there’s a field of green filled with sunflowers outside your window. How much is that worth to you? Hard to estimate, right?

Now, fill that field with solar panels and battery systems. Has the value of your view increased or decreased? And, by how much? For many, a field of flowers is priceless. Few say that about a football field packed with solar arrays. That’s how contingent valuation works. We don’t appreciate what we have until we lose it — especially when it will never return.

StarAd writer Andrew Gomes reported solar farms, all of which include battery systems for energy storage, are planned for Waianae, Kapolei, Kalaeloa, Ewa Beach, Kunia and Waiawa on Oahu; Waikoloa and South Kohala on Hawaii island; and Kihei, Kahana and Pulehu on Maui. Isn’t this sacred land?

“Even though these are all solar or low-profile storage projects, we know there’s increasing concern about the location of renewable energy projects.”
Jim Alberts, Hawaiian Electric senior vice president

Solar is an inviting energy source. Prices have dropped favorably over the past decade. Yet Hawai’i lies in a hurricane zone. Those from Kaua’i remember ‘Iniki. Most of us remain terrified of storms and scientists warn of larger, superstorms in our near future. Hurricane Maria destroyed state-of-the-art Tesla field in Puerto Rico. CEO Connie Lau wants thousands of football fields of panels here. Why? 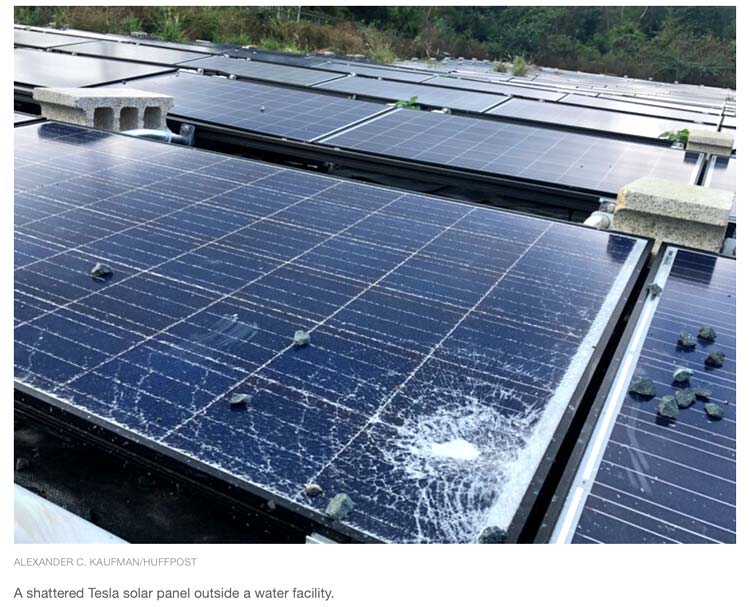 Panels don’t last forever and degrade over time. Manufacturers typically guarantee 90% of panels’ production until the first ten years. After ten years, that percentage drops back to 80% for the remaining 15 – 20 years.

Strong winds cause solar panel degradation due to flexing of the panels — known as a dynamic mechanical load — and the sun itself contributes to degradation.

Think of the challenge this way. You install 100 panels for your home. It’s a 25-year investment. After five years, ten no longer work (90% operational); after ten years, twenty no longer produce energy (80% operational). You have to install more to keep up. Old panels and worn-out battery systems go into the rubbish heap. Who pays this cost?

The picture below highlights an island in the Bahamas where they’re installing and deploying solar panels hardened to withstand superstorm and hurricane winds. More expensive, but they’re preparing for the future. CEO Connie Lau is preparing for her retirement by installing cheap panels that increase profits for the company, while leaving a deadly future disaster for residents. See what I mean? She’s an excellent banker, not a wise and safe engineer.

I’ve presented a number of proposal to local officials about a better way forward. We’re a unique place in the middle of the Pacific ocean. We shouldn’t apply mainland solutions to our beautiful natural resources. Solar energy deployment of this magnitude makes as much sense as allowing return of 30,000+ daily-arriving visitors during SARS-CoV-2 pandemic.

Only greedy, cruel people would flood our islands with possible infectious people. Likewise, only greedy, incompetent financial reps and bankers would cover our luscious green spaces with silicone, plastic and metal in a hurricane zone.

There are other and better ways. This conversation to be continued …