As our young people tear down statues, call the nation racist, we must ask ourselves how it’s possible they have such a dismal and distorted understanding of U.S., Hawaiian and world history. Certainly don’t blame teachers or the school system. I know what goes on. Students are more interested in texting each other and finding the next social event than studying. Books are for geeks and nerds; cool people hang out and hook up. 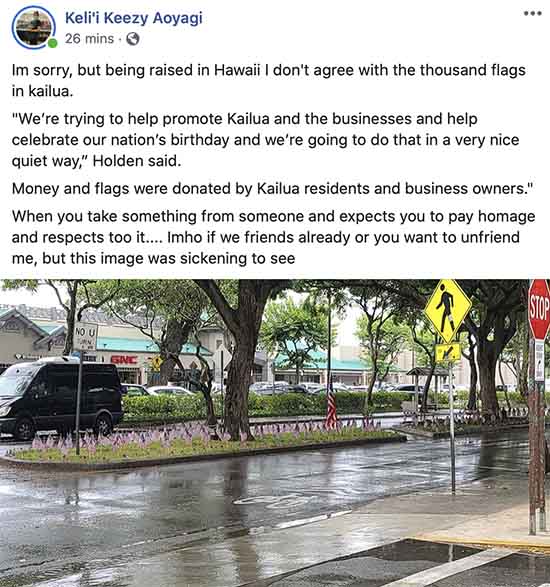 What does 1776 represent? Thirteen colonies, different kinds and types of people, joined together freely to throw off the yoke of an oppressive king. Our Founders signed an agreement, risking their lives, to start an experiment where The People engage in self-rule, participatory democracy, and government “of the people, by the people and for the people.”

Keli’i Keezy Aoyagi and others ripped thousands of flags from the ground in Kailua. The group prefers oppressive kings and monarchs who consider THEIR BLOOD to be superior to yours and others. This is the definition of racism.

Chatted with a hopeful, young reporter from StarAd a couple weeks ago. Cassie Ordonio was covering Black Lives Matter marches. She made many spelling and factual mistakes, and had written incorrectly in her article:

Today is Juneteenth, the holiday celebrating the day in 1865 that all enslaved black [sic] people learned they had been freed from bondage.

Cassie responded defensively to my points: “It saddens me that you could’ve had a conversation with me before judging.  But mahalo for reading my story. Try reading it again.” This is the teacher’s dilemma in a world of Participation Trophies. Heaven forbid if you correct a student. They’re quick to say, “You don’t know me and therefore don’t judge me.” Yet they quickly judge you, me and our nation.

Cassie wanted me to know she’s a “non-black woman of color.” Doesn’t matter to me the color, race, gender or sexual orientation of a person or professional. Seems intensely important to our youngsters. She was also motivated to point out she considered me a person of privilege:

“You had the privilege to learn about this in a classroom. But to experience it in the community is another. To be the reason for Ethnic Studies (which I majored) to exist makes me uncomfortable.”

My mother spent her career as a first grade teacher in a poor, predominately African American school. She didn’t just teach her students: with our limited household funds, she loaded her car with cereals, milk and sandwich fixing to feed her needy students. Although exhausted, she stayed up late nights sewing clothes for them, and she brought many home to provide additional tutoring and love.

She launched both Head Start and Follow Through not just for her school but the entire district. As an athlete, I was deeply immersed in the Black community. But Cassie judged me without any knowledge of whom I am or understanding my background.

ALL enslaved Black people did not learn of their freedom on this Juneteenth. Cassie claims our education system is the problem:

“The education system in the U.S. is behind other counties. When I was sent to detention all you see is people of color. Why are we sending a “bad student to detention instead of sending them to the councilor [sic] or career center? So to be a person of color and to have a teacher not see any hope for you..hurts and makes you angry. Few of my friends, who are in jail now, were foster kids and they got into all sorts of trouble but they’re really hurting. I’ve seen them break down to tears.”

I’m a third-generation teacher who taught Special Ed, specifically BD (behavioral disadvantaged) students. My father retired as one of the top principals in the state. First time I sent a student to the office for misbehaving, he summoned me. “What do you want me to do? You’re in charge of the classroom. Your job as the teacher is to figure out how to reach every student.”

Rarely sent students to detention after this. Would forgo my lunch, come in early or stay late to work with students who were talking too much, refusing to complete assignments or being disruptive.

Teachers were warned after this time to no longer do this … as a disgruntled student might claim inappropriate behavior when they are alone. Schools created detention centers to manage disruptive students. Taxpayers do not provide enough counselors.

Racism in Our Words

Cassie Ordonio also wrote “black” without capitalizing. People are not a color. The use of “black” is a Proper Noun, and educated writers know to capitalize proper nouns. For example, American is capitalized. Latinas, Hispanic, Asian, Chinese, Japanese … etc., all are capitalized. Cassie claims to decry Institutional Racism, like furthered at Hawaiian Electric under CEO Connie Lau, but diminishes Black people by denying respectful reference. This is the state of our nation’s university programs. Conservative FoxNews corrected practices today noting they will capitalize Black when referring to African American folks.

Other colors that are commonly used to describe a race, such as “White and “Brown,” also will be capitalized when used as adjectives, coinciding with the recommendation by the National Association of Black Journalists.

“Here’s a history lesson. In the 1700s slavery was illegal in Hawaii. Any black person with African and even Puerto Rican descent can go to Hawaii on whaling ships – they’re free. Slavery was still going on in the mainland during the 1700s. Black people in Hawaii during that time became entrepreneurs, musicians and even advisors to the monarchs. It wasn’t until the businessmen came over and the whole sugar plantations basically fucked everything up leading to the overthrow. Colonial trauma is real. Personal experiences and feelings from the sources in my story do not lie.”

Confused, I inquired, “sure about the dates? Captain Cook is thought to be the first encounter with the outside world — other than Polynesians — in 1778.” Don’t believe whaling ships arrived prior to Cook. Don’t believe Black people became “entrepreneurs, musicians and even advisors to the monarchs.” Cassie does. She’s a reporter for StarAd.

“It wasn’t until the businessmen came over and the whole sugar plantations basically fucked everything up leading to the overthrow.”

Businessmen didn’t “come over.” Hawaiian kings and queens invited their investment in the islands. The monarchs leased/sold/traded land to raise livestock for local people on Big Island; grow cane for sugar exportation; and asked haole (foreign) investors to build an electric grid for Honolulu. Yet in Cassie’s opinion, “Colonial trauma is real.”

Cassie, Hawai’i was never a colony of the USA. #AllFactsMatter

People Who Worship a Racist King

Want to state for the record Americans have made many mistakes in our brief history. We’ve also accomplished amazing feats. I make mistakes; you make mistakes. Cassie and others make mistakes. Our ancestors did as well. Slavery was a terrible sin. Yet only 1% of Americans held slaves. First slave owner in America was a Black man. Black chiefs, kings, tribal leaders in Africa forced millions into slavery. Black and White people failed. 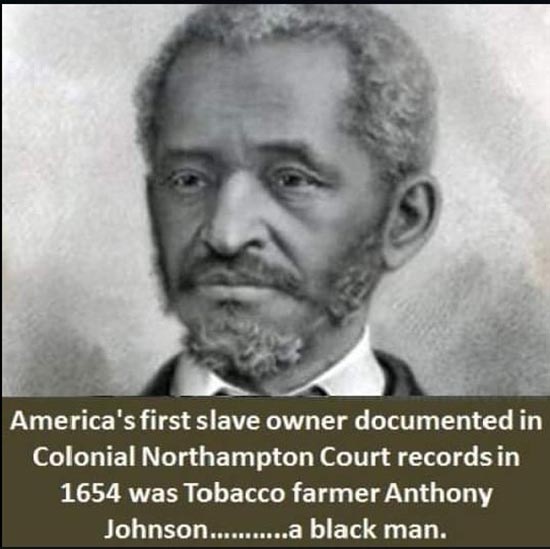 My g, g grandfather, Robert A. Lower, earned the Congressional Medal of Honor as a union soldier at Siege of Vicksburg. He was one of only 19 survivors from an All-White regiment of 110 volunteers. Cassie, Keli’i and other youngsters claim he’s racist? They paid in blood to FREE Africans they didn’t own or who they had never met. Black and White people teamed together to end slavery.

Amelia Gora posted a photo of Kamehameha I on social media and expressed her pride to be a descendant. First Polynesians to Hawai’i came from Marquesas and Tahitian islands. They found paradise: plenty food, fresh water and moderate climate. They lived peacefully in small community villages.

For the record, Kamehameha I launched a thirty-year war (1782-1810) to force island inhabitants into HIS kingdom. This violent aggression follows the authoritarian pattern seen around the world during this period. While thirteen colonies joined together 1776 to free themselves from an oppressive king, Kamehameha I turned canons and heavy weapons on free people to force them under his rule. Amelia is proud to support violent Male Patriarchy. 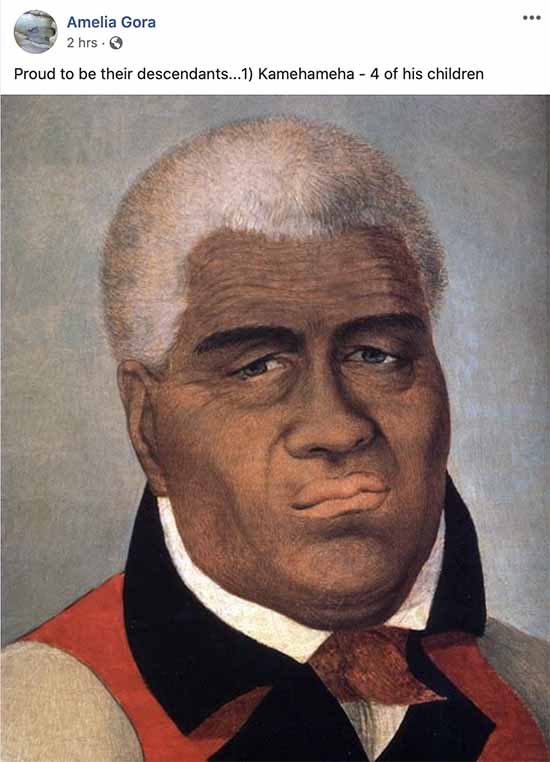 Amelia’s attached article explains history: King Kamehameha, the Great, has ended years of frustration by finally winning obeisance from the last island monarch, King Kaumuali’i of Kaua’i, without bloodshed. In swearing allegiance to the 6-foot 6-inch Kamehameha, Kaumuali’i joined other island kings conquered by the man that Lieuenant [sic] James King of Captain Cook’s expedition described as having “as savage a looking face as I ever saw.”

Kamehameha I threatened violent invasion of Kaua’i unless Kaumuali’i capitulated. That’s like a guy saying to a woman, “Give me sex or I beat you.” Amelia and Cassie would call this rape and champion one who raped island inhabitants. 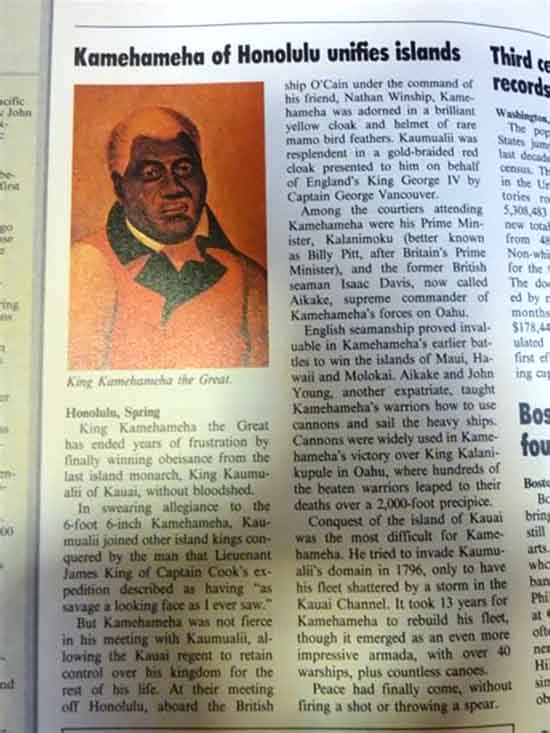 Another misguided youngster, Anne Love, called me a “hater” and unfriended me for my comments. DJ Nocturna represents the tolerant, liberal Political Left. Say or write sometime they don’t like, murder you on social media.

Anne was promoting the ‘Iolani Palace. There was no gold or silver in the Hawaiian islands. Land is the valuable asset. The monarchy had plenty of fish, coconuts, mangos and flower lei. They had no cash money. They teamed with U.S. businessmen to recruit poor people from Japan, China, Philippines and other locations to work fields. This made kings, queens and businessmen wealthy. Workers? Same as today in the fields of California and the west. They were exploited.

The ‘Iolani Palace was designed by White Americans and paid for by the labor from People of Color. Similarly to my opinion about King George of England in 1776, I believe Kanaka kings and queens added nothing of value for people here either. They profited; people slaved in the fields.

Polynesian people didn’t need a strongman to rule them — if so, they would have asked. One doesn’t use heavy weapons on people if they are supportive. The Polynesian people were capable of self-government, as were Americans. However, they didn’t get an opportunity until Americans and British demanded reforms toward participatory government beginning in 1840.

Black ppl have been dehumanized, brutalized, criminalized + terrorized by America for centuries, & are expected to join your commemoration of “independence”, while you enslaved our ancestors. We reject your celebration of white supremacy & look forward to liberation for all.

He started a firestorm August 2017 kneeling before an NFL game: “I am not going to stand up to show pride in a flag for a country that oppresses black people and people of color,” Kaepernick told NFL Media in an exclusive interview after the game. 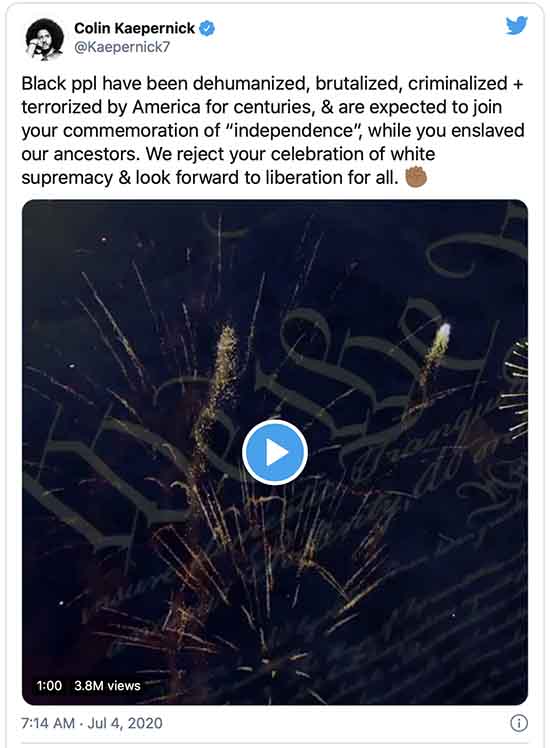 CK supporters now claim he didn’t intend to protest or disrespect the flag, only raise awareness about police brutality. #AllWordsMatter

CK isn’t highly skilled in politics. He announced to the world he was protesting the flag. He now discredits the courage, valor and sacrifice of those who in blood threw out an oppressive king and marched toward greater freedom for all. CK has benefited tremendously from the system he claims to be cruel and terrible.

Derrick Gradenigo reminds CK of his blessed White family who adopted him, loved him dearly, and launched him into a professional athletic career. 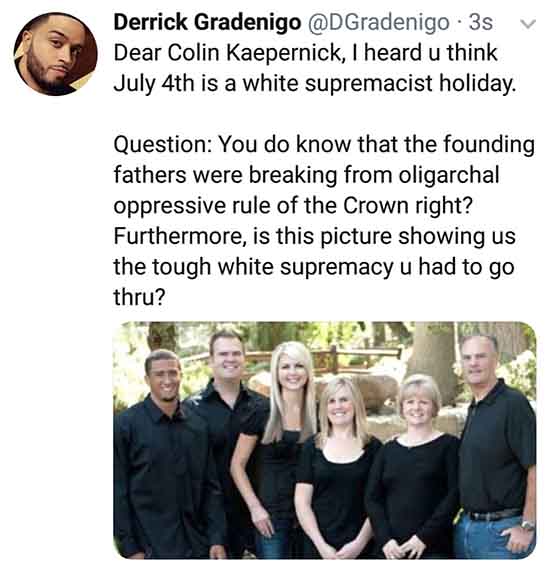 Seems like CK is more interested in following Mob Rule than being a leader. He championed the 4th of July as a younger man. What a blessed day, he said.

We don’t move forward arguing about the past. Believe President GW Bush said it best:

“I think we agree, the past is over.”