Chicago Police Supt. David Brown considers “open-air drug markets” as the “pipeline to shootings and murders in Chicago,” which had been exacerbated by coronavirus challenges in addition to “low bonds for violent offenders.”

“They hire young kids that don’t have any significant criminal history to be on these corners selling drugs for them and holding the guns and protect them until they sell their allotment of drugs and turn it back over to these evil b——-. They do that because these young people don’t have significant criminal histories, and they’re young, so when we arrest and clear the corner, they’re in jail and out of jail.”

“That’s why they’re there, to feed their families,” Brown continued, referring to such criminals as “shorties.” “It is an evil methodology. It puts us in the position to arrest young people and put them in the pipeline to prison, which we don’t want to do.”

A Chicago Police study of the 436 murders a year prior found that most of the victims were young Black males killed in gang-related disturbances, noting that “most victims and their killers had a prior history of an arrest.”

End The War on Drugs

Nine members of the Minneapolis City Council sent shockwaves across the nation Sunday voting unanimously to defund the city’s police department due to the murder of George Floyd. Understandable emotional response. They are right and wrong, as I show here.

“We committed to dismantling policing as we know it in the city of Minneapolis and to rebuild with our community a new model of public safety that actually keeps our community safe.”
Council President Lisa Bender 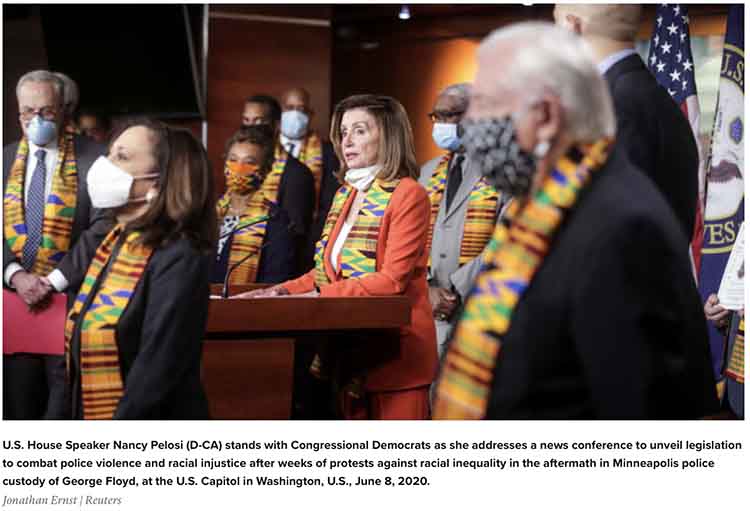 Top congressional Democrats unveiled a bill today to overhaul police practices as Americans continue protests against excessive use of force and systemic racism. Proposed legislation includes recommendations, such as:

It’s unknown whether any of these changes would have prevented the murder of George Floyd, and some claim citizens will refuse to join police ranks if society ties the hands of officers who face deadly threats. Citizens overall do not win if police ranks are decimated.

In Hawai’i, we recently mourned the death of two Heroes in Blue who were murdered protecting our ‘Ohana January 2020. There are millions of Bad People out there.

Police brutality is a real concern. We have witnessed too many examples of unacceptable professional behavior. We also need to caution about emotional over-reaction. Here’s a more complete picture of the challenge the African American community faces:

Black People killed by People
2018: 6,237 Black Americans murdered — 90% killed by Black people. This is 29 TIMES higher than the number killed by police.

Democratic president-candidate Joe Biden says he does not support defunding police departments in the wake of nationwide protests against police brutality.

“As his criminal justice proposal made clear months ago, Vice President Biden does not believe that police should be defunded. He hears and shares the deep grief and frustration of those calling out for change, and is driven to ensure that justice is done and that we put a stop to this terrible pain.”
Andrew Bates, campaign spokesman

Biden has a great deal of explaining to do — particularly to the African American community. Biden led the Senate, and with the support of President Bill Clinton, they passed the Violent Crime Control and Law Enforcement Act, now known as the 1994 crime law. Democrats wanted to rival Republicans getting “tough on crime.”

Democrats didn’t call for 100,000 new teachers and billions to rebuild the inner cities. They got “tough on crime” along with Republicans and incarcerated millions of poor, primarily Black men.

Politicians on both sides of the isle demanded POLICE execute their political objectives and CONTROL people in dysfunctional cities. Overwhelmingly, it’s been Black v Blue for 30 years. Politicians made the rules; yet people are angry with police. Woke?

What Would Dr. King Do?

There aren’t many people alive or in our recent past who can heal the gaping wound our nation suffers today. One leader we seem to collectively respect is Dr. Martin Luther King, Jr. He gave his life seeking lasting peace for our country. Dr. King believed our nation suffered three evils: Poverty, Racism and Militarism. 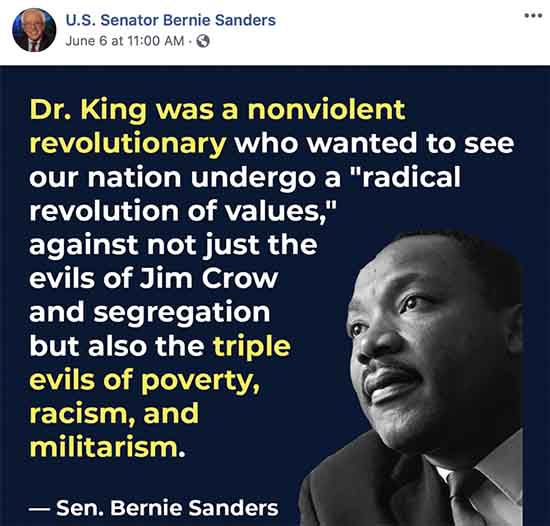 In 1970, President Richard Nixon signed the Controlled Substances Act. Against the recommendations of his own commission, he criminalized cannabis not for medical or social reasons, but for extremist political purposes. The CSA also includes heroin as a Schedule I drug for similar reasons.

“The Nixon campaign in 1968, and the Nixon White House after that, had two enemies: the antiwar Left and Black people. We knew we couldn’t make it illegal to be either against the war or Black, but by getting the public to associate the hippies with marijuana and Blacks with heroin, and then criminalizing both heavily, we could disrupt those communities. We could arrest their leaders, raid their homes, break up their meetings, and vilify them night after night on the evening news.”
John Erlichmann, Nixon’s Domestic Policy Chief, 1994

The War on Americans Who Use Recreational Drugs has wasted trillions of U.S. tax dollars, targeted People of Color most heavily, turned our police into soldiers, and filled our nation with prisoners: Poverty, Racism and Militarism. Triple evils!

Defund the War on Drugs

Some 33+ states, D.C., and the U.S. Department of Veterans Affairs have authorized medical cannabis. About 11 states have legalized recreational cannabis. The DEA definition of Schedule I drugs includes substances that have “no currently accepted medical use in the U.S., a lack of accepted safety for use under medical supervision, and a high potential for abuse.” Cannabis does not fit this definition.

Substance abuse is not a law enforcement responsibility. It’s a medical concern. We tolerate alcohol in society, although an estimated 90,000 Americans (mostly men) die from alcohol-related causes annually. Women primarily suffer unbearable levels of domestic abuse related to alcohol consumption, and some 30 Americans die daily as a result of drunk driving accidents. Yet Alcohol Prohibition was worse than consumption.

The U.S. banned alcohol January 1920 with the 18th amendment. Outcome was extraordinary levels of violence in communities, massive financial costs to taxpayers, and emergence of legions of gangsters. Americans ended the experiment in 1933 with ratification of the 21st amendment.

“When Prohibition was introduced, I hoped that it would be widely supported by public opinion and the day would soon come when the evil effects of alcohol would be recognized. I have slowly and reluctantly come to believe that this has not been the result. Instead, drinking has generally increased; the speakeasy has replaced the saloon; a vast army of lawbreakers has appeared; many of our best citizens have openly ignored Prohibition; respect for the law has been greatly lessened; and crime has increased to a level never seen before.”
John D. Rockefeller, Jr. [1932]

Putting people in prison does not stop the cycle of abuse, and we need a new social paradigm. Portugal decriminalized ALL recreational drugs in 2001. Not perfect, but far more successful than our record.

In Portugal, the drug-induced death rate has plummeted to five times lower than the E.U. average and stands at 1/50th of the United States. Its rate of HIV infection has dropped from 104.2 new cases per million in 2000 to 4.2 cases per million in 2015. Drug use has declined overall among the 15- to 24-year-old population, those most at risk of initiating drug use.

Under Portugal’s 2001 law, drug dealers still go to prison. But anyone caught with less than a 10-day supply of any drug—including cannabis and heroin—is typically sent to a local commission, consisting of a doctor, lawyer and social worker, where they learn about treatment and available medical services. No distinction is made between “hard” or “soft” drugs, or whether consumption happens in private or public. What matters is whether the relationship to drugs is healthy or not.

Economists know society must balance expenditures. In the simplest model, people can have either guns (security) or butter (public services); or combination of both. It’s time to DEFUND some of our “gun” programs and increase public services.

Start by taking money from the War on Americans Who Use Recreational Drugs and apply these resources toward community development. Here’s the history of Colorado cannabis tax revenues: $1.3 billion since 2014.

Michael Jordan ponied up $100 Million for community reinvestment. Others are joining the team. It’s time to STOP filling our prisons and START extending hope and real opportunity to all Americans.

Joe Biden appears to be the presumptive Democratic-candidate for president. His administration needs a vice president and our nation needs healing. More aloha in America is the solution. What better partner for Joe than Tulsi Gabbard? She’s youthful, energetic and capable of standing up to entrenched Washington insiders.

Democracy requires compromise and tolerance. Tulsi brings a moderate approach to leadership. Respected by conservatives and liberals, as she’s dedicated to families and ‘Ohana (community). As an Army Reserve major, she recognizes the importance of American strength around the world while limiting reckless adventurism and expenditure.

The COVID19 pause in our economy and murder of George Floyd offers us the perfect opportunity to begin reclaiming our national soul. Be Like Mike … #JustDoIt

4 thoughts on “Time to Safely DEFUND the Police”