Allyson Blair claims to be an “Emmy award winning journalist who loves to tell a good story.” She told a damaging story about me. She’s been a reporter at Hawaii News Now (HNN) since 2015. Allyson asked me to volunteer for a research project concerning CBD in September 2019. She coached me to lie to obtain products and information for her story.

Told Allyson I had no interest buying or trying CBD products. She built a cover story. She asked me to deceive retailers and do whatever I could to encourage them to tell me about their products. Allyson Blair and HNN instructed me to act unethically with local retailers.

In return for volunteering, Allyson promised to report the horror I suffered being fired by Hawaiian Electric due to my legal medical cannabis prescription. Only used at night before bed; never before or during work; and HECO HR assured me I “would be fine” when I specifically inquired about my medication. Medical cannabis is legal in Hawai’i and not prohibited in Hawaiian Electric Corporate Code of Conduct.

Spoke extensively to Allyson about that situation believing this was for a later story. There are some 30,000+ medical cannabis patients in Hawai’i. All of us suffer similar employment discrimination. #All Patients Matter

I’m a public health professional with some 30 years of experience. Directed programs for the Department of Health (DOH) using “under age” youngsters attempting to buy tobacco or alcohol products. These were “sting operations” conducted in cooperation with law enforcement officials.

At the time of the HNN investigation, was a medical cannabis patient of Dr. Clifton Otto. He gave my name to Allyson for her proposed project. Dr. Otto was unprofessional with me. He’s no longer my doctor.

Please do not draw me into what’s going on between you and HNN. This was a very important story that needed to be told, especially since DOH still isn’t doing anything about it, so I appreciate the risks you took by participating.  I believe this is the only way things are going to change.
Clifton Otto, MD

Allyson wanted to collect CBD samples from speciality shops in Honolulu — not legal cannabis dispensaries. These locations are open to ALL citizens. Products include CBD-infused drinks, gummy bears, bars, cookies, cannabis flower or leaf, or oils from ABC-type stores and various “head shops.”

My previous experience with such investigations was helpful. Due to confusion over legality of CBD products, HNN needed someone with a current DOH “329” authorization to make purchases and encourage retailers to speak about their products.

Allyson Blair instructed me to lie. Gave me about $200 to make purchases. Products that were never intended for me. Her team equipped me with a special iPhone and fisheye lens to record sessions.

HNN News Director Scott Humber backed her behavior. Humber then punished me for speaking out. Begged both Allyson and Scott to remove my name from their story. My identification is irrelevant. A Google search on my name now returns their story and labels me pejoratively.

Allyson and Humber just published a similar story questioning the safety of cannabis vape cartridges. Allyson wrote, “Several months ago, this reporter accompanied a cannabis card holder who randomly purchased nine samples. Most were purchased at Aloha Green because it had the biggest stock.” 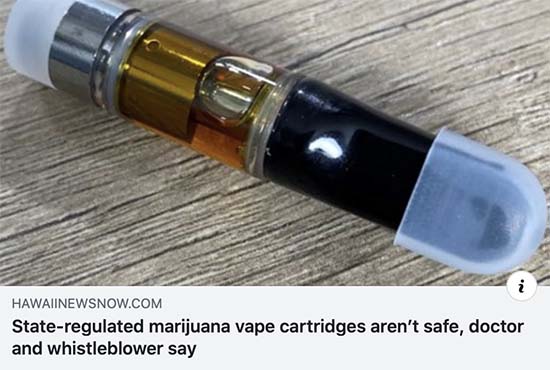 This is similar to Allyson’s project with me. Notice she does not identify the “cannabis card holder.” She refused to offer me similar professional courtesy and protect my identity.

National research suggests CBD products aren’t properly regulated. As a health professional, consider CBD world to be Wild Wild West. Have never tried any; have no plans to do so. Volunteered only because Allyson, Humber and HNN needed someone to purchase products and I wanted to protect the public.

Allyson Blair, Scott Humber and Hawai’i News Now did not protect me and engaged in unethical activity for their story. What kind of people and organizations behave this way?

Vioxx is a COX-2 selective non-steroidal anti-inflammatory drug (NSAID) and is also related to nonselective NSAIDs , such as ibuprofen and naproxen. Vioxx was a prescription medicine used to relieve symptoms of arthritis, acute pain in adults, and painful menstrual cycles.

“People should turn to Congress and demand a drug safety system that is free from corporate influence — and a distinct center for drug safety.”
David Graham, FDA

Food and Drug Administration official, David Graham, estimates Vioxx killed some 60,000 patients — as many people, he points out, as died in the Vietnam War. He claims fundamental problems at the FDA led to those deaths. The FDA also approved opioids.

Was trained 2009-2013 by the University of New Mexico School of Medicine to battle the opioid epidemic. We’ve been killing some 50,000-80,000 Americans annually due to opioid overdose — many who initially received these medications from doctors or medical teams. Our nation shut down to protect Americans from SARS-CoV-2. The FDA and corporations, such as Hawaiian Electric, authorize opioids.

Opioids are highly addictive and dangerous. Although been offered “bags” of opioids, I turned them down. Local surfing legend, Andy Irons, died from opioid overdose in 2010.

As a public health professional, I challenged the practice of vaping for years. In February 2019, battled with state committee chair Senator Roz Baker for denying cannabis edibles for patients. Hawai’i politicians do not protect health of citizens. Teen vaping in the Aloha state is twice the national average, and the U.S. suffered a vaping crisis last year.

As of February 18, 2020, a total of 2,807 hospitalized e-cigarette, or vaping, product use-associated lung injury (EVALI) cases or deaths have been reported to CDC from 50 states, the District of Columbia, and two U.S. territories (Puerto Rico and U.S. Virgin Islands).

Oil and water do not mix, as we know. Inhaling “vaped” oil into healthy, moist and water-based lung tissue is illogical. Had tried a couple of products when they first appeared. They had a negative impact on my respiratory system. I don’t vape. Don’t recommend others to vape. Do not consider opioids or vaping to be safe.

President Trump touted use of hydroxychloroquine as a possible prophylactic against COVID19 infection, and apparently used the malaria medication recently for two weeks. The FDA has approved use in clinical settings. The “esteemed” medical journal, Lancet, claimed a large study documented health-safety issues about the drug for coronavirus patients.

Thursday, June 4th, embarrassed Lancet editors retracted the May 22nd publication, which was based on the observational review reportedly involving more than 96,000 patients and 671 hospitals on six continents. Seems the blind are leading the blind.

It’s well-known today President Richard Nixon scheduled cannabis illegal in 1970 so his administration could target anti-war protestors, hippies and African Americans. In 2000, Hawaii’s legislature was the first in nation to legalize medical cannabis. They strengthened protections in 2015.

Yet prestigious Hawaiian Electric fired me in 2019 after successfully serving the company and public for six months. The corporation still denies over 30,000 human beings employment for using this medication, while allowing opioid-based analgesics. Over 500,000 Americans have died from opioid OD. This is some FIVE TIMES the current loss of Americans to COVID19. Nobody has ever died from cannabis overdose. Nobody!

The FDA authorized Vioxx and other drugs, which killed Americans. The list of recalled drugs is too long to print. FDA expert, David Graham, was correct:

“People should turn to Congress and demand a drug safety system that is free from corporate influence — and a distinct center for drug safety.”