Was privileged to attend high school in a small town in southeastern Idaho. One dear friend, Dirk Koetter, currently serves as Offensive Coordinator for NFL Atlanta Falcons. His father, Big Jim, coached both of us. He instilled a winning, championship attitude in athletes and students. We were Highland high school RAMS: Right Attitude Means Success

Coach Dirk Koetter wrote today from Georgia:
So many have sacrificed so much so that we all might enjoy the freedoms this flag represents. The United States is not very United right now. Like in any team sport, we ALL have to do our part in order for the TEAM to have success. Please, EVERYONE, do your part to promote Social Equality!

Responded to friends and colleagues:

“Please, EVERYONE, do your part to promote Social Equality!”

In high school, people nicknamed me “inside-out Oreo.” Spent my life deeply ingrained in the African American community, as has Coach Koetter.

While 95% of Americans are good-hearted, deeply-loving human beings, we cannot cast off the yoke of racial injustice and oppression. The MURDER of George Floyd ripped off the bandage and revealed the gaping wound.

For over 40 years, I’ve battled against the War on Drugs. Was blessed to grow up in a town like Mayberry RFD. Police lived next door and coached our Little League football teams. We were UNITED. We were family, or ‘Ohana, as we say here.

Politicians on both sides of the isle FAILED to hear the cries and pain from our nation’s most vulnerable. Instead, they DEMANDED police place a “heavy hand” on desperate and struggling families who had ZERO hope and opportunity. Many African Americans.

For the lucky few, they got out through athletics or entertainment. Coach Koetter and I have worked with many. Yet millions remain trapped. They are controlled by police. It’s a deadly mixture of frustration, hatred and anger.

Wouldn’t want to be a police officer. Who can live like this? We ask police to do what we wouldn’t do. It’s an inhumane job. We don’t pay police officers well; don’t support them. They’re scared all the time. We treat American Veterans similarly. We ask for service; and then (as a nation) forget them. 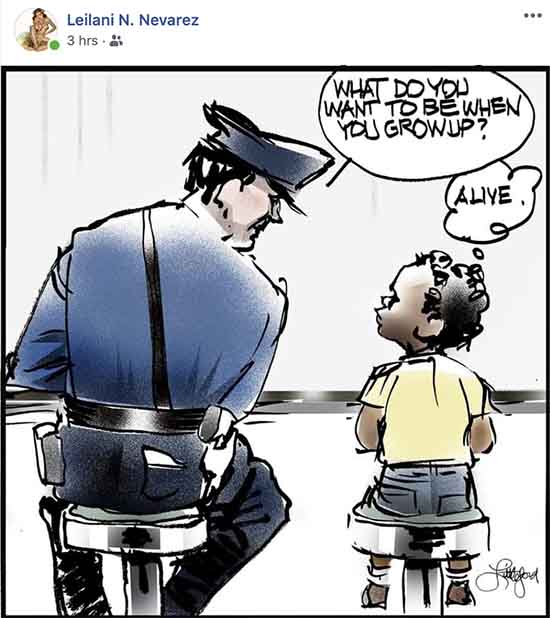 We continually demand police do more, while underfunding and short-staffing their ranks. No football team could become champions under such conditions. We provide our athletes the BEST training, BEST food, BEST teachers … the POOR in America never see such privilege.

A championship football team knows everyone — from water boy to QB must be respected. Although we pay stars more, we recognize ALL on the team must be fairly compensated. Some 40% of Americans do not have $400 for an emergency, as COVID19 crisis has exposed.

Great sports teams have strong leadership. They do not further whining, backbiting or pointing-of-fingers. Our political system (both sides) seems to promote all three. When I look at American politics, honestly can’t say we have one good leader — right or left; Republican or Democrat.

In our failure to care for each other, our system also champions “victimhood.” A football team does not rise to the top if players scream at the coach, “You didn’t play me enough,” or “You didn’t support me adequately.”

Americans used to have a collective mentality, “Adapt, Improvise, and Overcome.” Coach Koetter, like father Big Jim, teaches these values. Few in America do anymore. Have we lost the American Spirit?

While the nation burns today, yesterday we had a historic space flight. Our collective ingenuity was on display. Black, White, Asian, Hispanic … male, female, tall, short … all of us working together for the greatness of America and humankind.

All boats in the harbor must rise for us to be a great people. History is in our hands today.