July 23, 2020, and Major League Baseball finally kicked off their first regular season game. C19 has devastated our national pastime, thrown the country and world into chaos, and pitted Americans against each other.

We are not winning this Third World War against nature and a virus. As a country, we’re not even in the top tier of Best Performers. We’re bringing up the rear. Dr. Anthony Fauci tossed out first pitch in the opening game last evening between the Washington Nationals and the New York Yankees. While I was first in the U.S. to call to #MaskUp on March 19th, Dr. Fauci was directing Americans to not. He was Dead Wrong!

The National Institute of Allergy and Infectious Diseases director’s pitch captures the state of our nation, as well as collective response to C19. Please take a moment to watch.

Many on social media were quick to point out the hypocrisy of our national doctor. We should all be wearing a face mask or covering when unable to properly social distance, correct? Isn’t this the advice of Dr. Fauci, CDC, the president and state governors? This is extremely poor leadership!

As a college and pro athlete, we were not allowed to protest while in school or employer uniform. Could protest after work anytime. Society believed sports were an opportunity to escape the drudgery of work and life, as well as take a pause from 24/7 politics. This made sports fun for all.

Now, athletes protest at sporting events. There’s no escape from politics. Maybe you agree with this one action; will you the next time? 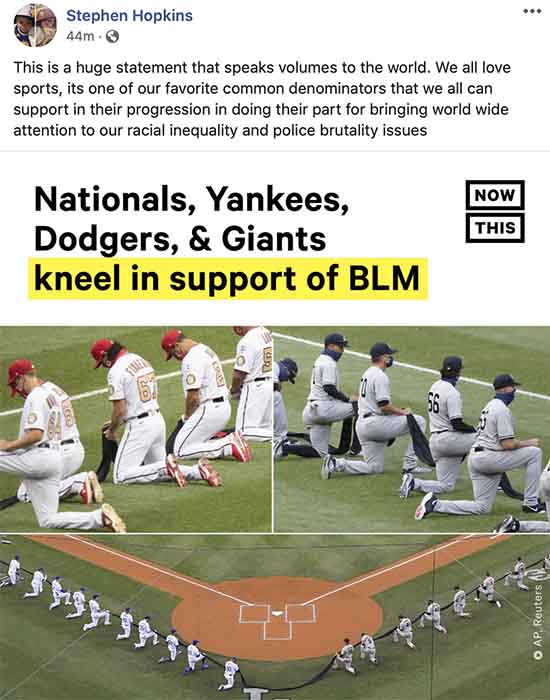 Much of this is emotion. What does BLM want? End police brutality and racism? How about looking at the numbers? We enjoy examining stats when comparing athletes or sport teams.

In 2019 according to Statista data, 370 Whites were shot by police along with 235 Blacks. Aren’t more White people killed by police than Blacks? African Americans correctly point out there are fewer Black folks (13%) than Whites (70%) in our country of 320+ million people. We should adjust these numbers based on subpopulation size to be more accurate.

To do this, let’s multiply the number of Black deaths of 235 by five (70% / 13%) to adjust for the larger population size of Whites in society. This increases the number of African American deaths to 1,175, and allows us to compare apples-to-apples, so to speak.

Relatively then, although police kill 370 White Americans on average each year, they also kill 1,175 African Americans. Clearly, far more Blacks are killed by police than Whites, and high-profile murders by police of people like George Floyd and Breonna Taylor increase the frustration. Black Lives Matter, right?

Yet how about Black-on-Black compared to White-on-White killing? Black activists claim making such comparison is a distraction. Don’t ALL Black Lives Matter?

Many Americans love baseball, as statisticians break down the sporting activity in such detailed and finely granular ways.

Let’s do the same with murders across the nation:

Whites kill more Whites than Blacks kill Blacks. Right? Yet remember the difference in subpopulation sizes. We also must adjust by a multiple of five to account for the smaller population size of Black Americans. Thus, 2,570 X 5 = 12,850 relative Black-on-Black murders.

Now, let’s put all this together:

Either way we look at it, Black people are killing more Black folk than Whites kill Whites or police kill Black Americans. So, why is BLM protesting at sporting events? In 2016, San Francisco 49ers quarterback Colin Kaepernick took a knee to protest:

“I am not going to stand up to show pride in a flag for a country that oppresses Black people and people of color.”
Colin Kaepernick told NFL Media

Now, comparing White-on-White and Black-on-Black murders to those in each group killed by police, we find Black citizens are killing more Black citizens.

This suggests police aren’t racist. There’s simply more violence, killing and murder in the African American community. Tony Timpa is a White male who was killed by police kneeling on his neck (see story). This shouldn’t happen to anyone — Black or White.

I also believe the War on Drugs has turned our nation’s inner cities into “war zones.” Republican President Reagan championed Supply Side Economics, which led factories to flee American cities for foreign shores. Millions of Black Americans were trapped in “economic dead zones.”

Loss of jobs increased poverty; lack of opportunity increased crime. Dealing drugs and illegal market activities exploded in broken cities. Poverty and crime led to an increased murder rate. Black men were hit hardest. This had many negative effects on families, and African American households have been splintered by both crime and culture.

Democrat President Clinton and Senator Joe Biden authored the 1994 Crime Legislation. Hillary warned of “super predator” teens. This “tough on crime” approach sent millions of Black men into jails and prisons. An estimated one in four Black males (25%) are part of the Criminal Justice system in America. Many enter while in middle or high school, and once enrolled, it’s nearly impossible to get out of the school-to-prison pipeline.

Black Lives Matter and supporters now ask for trillions of dollars in reparations. They blame the current crisis on slavery, Jim Crow, and what they call, Institutional Racism. It’s hard to argue these three social forces didn’t create headwinds for Black Americans.

At the same time, various Civil Rights action beginning in the 1950s with school integration and busing, specific legislation in 1964 and 1968, and affirmative action programs have opened millions of doors for Black Americans.

Racism certainly exists. It’s a disease. And like C19, it’s hard to stamp out completely. Yet 99% of Americans recover from C19. One percent will not. It’s likely we’ll suffer about 1% of Americans continuing racist behavior.

The War on Drugs should be ended. Drug abuse is a mental health issue, not one for law enforcement (see Time to SAFELY Defund Police). Billions of tax dollars spent to militarize police and build prisons should be redirected to revitalize our inner cities and increase job opportunities for those in economic dead zones. Non-violent drug convictions should be expunged to give many Black males a fresh start. 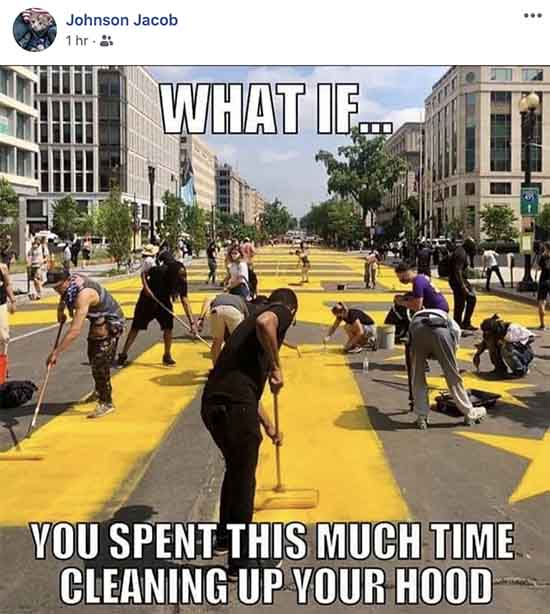 At this time, I would love to see Black Lives Matter patrol our nation’s inner cities. March not to riot and burn, but to protect the lives of ALL Black Americans and heal devastated communities. At the same time, leaders of the Black community need to focus on the family.

In my opinion, the example set by Black rappers and entertainers isn’t helpful, such as having many Baby Mamas. Calling women “bitches” and “hoes” is violence. Glorifying guns and illegal drugs are also part of cultural genocide. Blaming won’t resolve these challenges. We must work together to defeat C19 and rebuild America.