UPDATE 9.9.19: Started following Melania on Twitter today, as she is now WOKE about eCigs. 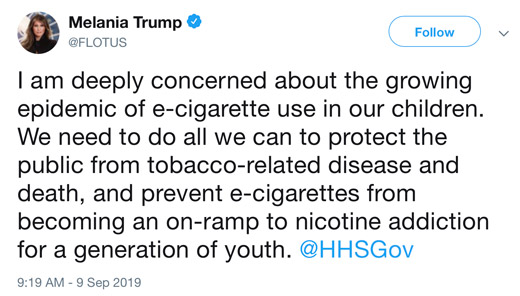 The FDA sent warning letters today to Juul, as Juul Violated Federal Rules By Labeling E-Cigs As Safer Than Cigarettes. The vaping company is also accused of marketing its products to students, calling e-cigarettes “totally safe.” Acting FDA Commissioner Dr. Ned Sharpless warned Juul, which has 15 days to respond to the FDA’s letter.

“Regardless of where products like e-cigarettes fall on the continuum of tobacco product risk, the law is clear that, before marketing tobacco products for reduced risk, companies must demonstrate with scientific evidence that their specific product does in fact pose less risk or is less harmful. JUUL has ignored the law, and very concerningly, has made some of these statements in school to our nation’s youth.”

UPDATE 9.6.19 PM: After posting my article earlier, HuffPost headlined with an alarming new report from CDC. Officials say they have identified 450 possible cases, including at least three deaths, in 33 states. Count includes a newly-reported death in Indiana.

Also today, New England Journal of Medicine released a series of articles providing medical details about cases reported in Illinois, Wisconsin and Utah. The 53 illnesses in Illinois and Wisconsin include nearly one-fifth of cases where people who said they vaped nicotine and not anything that contained THC or CBD oil.

Symptoms include shortness of breath, fatigue, chest pain and vomiting. Doctors say the illnesses resemble an inhalation injury with the body apparently reacting to a caustic substance that someone breathed in.

For this reason, doctors and health officials recommend people stay away from all vaping products until investigation establishes exactly what’s at the root of the illnesses.

As a public health professional, I have been sounding the alarm about the epidemic of vaping for some ten years now. We live in Upside Down World where elected officials, community representatives and business leaders allow the most precious and vulnerable members of society — our youngsters — to vape nicotine.

Less common but likely equally dangerous is the growing practice of vaping oil-based THC-infused products. There are a dozen medical cannabis dispensaries now in Hawai’i. Some sell vape products. Tried unsuccessfully to convince Hawai’i Democratic State Senator Roz Baker to stop blocking edible cannabis products, which are safe alternatives to vaping. She considers me the dunce in the class.

CEO Connie Lau took away my job at Hawaiian Electric for selecting medical cannabis over opioid medications. Opioids have led to hundreds of thousands of American deaths. Leaders punish those who make smart choices and ignore real threats in our society. They seem committed to inflicting pain and suffering on the America people.

Consuming nicotine through vaping releases the chemical dopamine in the brain. Dopamine “teaches” the brain to repeat the same behavior over and over. This is called reinforcement. The brain gets a dopamine “hit” from nicotine every time a person takes a puff of an inhaled vapor from an e-cigarette that contains nicotine. 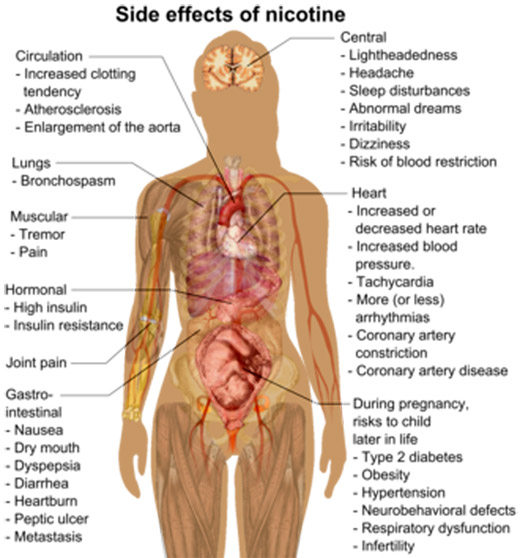 Adam Hergenreder started vaping two years ago at 16. Mint and mango flavors were his favorites. At this time, he is hospitalized and unable to breathe without a steady flow of oxygen through tubes affixed to his nostrils. Doctors explain the 18-year-old’s lungs look like those of a man in his 70s. His lungs may never be the same again and vaping is likely the cause.

“People just see that little (vape) pod and think, how could that do anything to my body? I’m glad I could be an example and show people that (vaping products) aren’t good at all. They will mess up your lungs.”
Adam Hergenreder

Hergenreder said he started feeling as if he had the flu and started vomiting. When he couldn’t stop, he woke his mother. After a trip to the emergency room and anti-nausea medication, he seemed better.

“I would hit it more and more. I’d cough right after.”

When Hergenreder began throwing up again, Polly brought her son to a different, closer emergency room, where a doctor ordered a scan of his stomach. That scan picked up the bottom of his lungs, revealing “something wasn’t right.” Adam was then hospitalized and put on oxygen because he was struggling to breathe. [source]

Polly said she was surprised her son wanted to vape, given his disgust for tobacco cigarettes. Adam had never smoked cigarettes or used other drugs, but couldn’t stop vaping.

“I feel stupid. I want other people to stop (vaping). It’s going to attack your lungs.”
Adam Hergenreder

Centers for Disease Control classified the explosive national rise in e-cigarette-related cases as an “outbreak,” and August 27th, the CDC reported 215 possible cases of severe pulmonary disease linked to e-cigs across 25 states.

“It’s all so new, but we seem to have found it is causing a chemical pneumonia. It’s a chemical irritant of the lungs. So, oils should not be vaped, nothing should be vaporized into the lungs unless you’re on oxygen.”
Dr. Dyan Hes, Medical Director of Gramercy Pedistrics in New York City

Dr. Hes warned, “You also have to remember it is getting heated…metal is getting heated, metal ions are being released, plastics are being melted. None of this is going to end well…We’re seeing people developing respiratory distress, people have died, people are intubated.”

New York State launched its probe as health department officials received at least 34 reports of severe pulmonary illness among patients ranging from 15 to 46 years of age, who were, “using at least one cannabis-containing vape product before they became ill.” [source]

New York scientists have focused on a substance found in cannabis vaping products called vitamin E acetate they suggest could be contributing to an outbreak of severe, vape-related illnesses that left hundreds sick and at least two people dead in recent weeks. [source]

“No one substance, including Vitamin E acetate, has been identified in all of the samples tested. Importantly, identifying any compounds that are present in the samples will be one piece of the puzzle but will not necessarily answer questions about causality.”
Michael Felberbaum, FDA spokesperson

Aloha Friday in Upside Down World