Aloha Green opened a second location in O’ahu last week. I stopped by Friday to check out their new digs. Initial facility is located at 1314 S King street. Aloha Green Apothecary received approval from the DOH to begin sales at 2113 Kalakaua Ave., across from the high-end shopping complex known as Luxury Row. This is the twelfth in Hawai’i.

Technically, the new facility isn’t on Kalakaua. It’s around the corner on Saratoga Road across from the U.S. Post Office. Wanted to help you locate it. See map below.

Security is professional. Staff is polite and helpful. Remember no credit cards — cash only.  Bring your DOH “329” card and legal photo ID. The Department of Health now has a digital version for download to your smartphone. No more physical cards as of this year.

Their selection of both indica and sativa was limited to about three strains each but quality was excellent. Budtenders are smart and educated. One talked to me at length about their vape products. These are oil-based solutions. I am leery of vaping products. He told me it has worked well for him.

We see in national news there are lung and health issues with vaping — particularly nicotine solutions. Many nicotine products are unregulated and come from China and Mexico. I wouldn’t trust any of these.

I’ve tried oil-based cannabis vapes previously and noticed some congestion in my lungs. Felt like I was experiencing minor asthma temporarily. These are new and relatively unknown medical solutions. Everyone is different so go slow.

Opioids have killed more than 400,000 people across the country since 2000, according to the Centers for Disease Control and Prevention.

The insanity surrounding pain medication seemed to come to a boil this week. Yesterday, an Oklahoma court found Johnson & Johnson liable for $572 million in part for the massive deadly opioid epidemic that has swept the nation. Opioids have killed more than 400,000 people across the country since 2000, according to the Centers for Disease Control and Prevention.

Plaintiffs — forty-eight states plus around 2,000 local and tribal governments — argue drugs were improperly marketed and that companies failed to stop suspicious orders from shipping. People like us chose medical cannabis rather than opioids and other medications, while suffering loss of employment and negative stigmatization. We clearly live in Upside Down World.

Today, a report by NBC News said Purdue Pharma, maker of OxyContin, has offered to settle for $10 billion to $12 billion. The Stamford, Connecticut-based company said it’s prepared to defend itself but sees little good in years of “wasteful litigation and appeals.”

State attorneys general and lawyers representing local governments and addiction experts consider Purdue as the main villain in the crisis for producing a blockbuster drug while understating its addiction risk. While no fan of opioids, I’ve found the charge ludicrous.

FDA “on label” Description is Clear

WARNING:
OxyContin is an opioid agonist and a Schedule II controlled substance with an abuse liability similar to morphine.

Oxycodone can be abused in a manner similar to other opioid agonists, legal or illicit. This should be considered when prescribing or dispensing OxyContin in situations where the physician or pharmacist is concerned about an increased risk of misuse, abuse, or diversion.

OxyContin Tablets are a controlled-release oral formulation of oxycodone hydrochloride indicated for the management of moderate to severe pain when a continuous, around-the-clock analgesic is needed for an extended period of time.

OxyContin Tablets are NOT intended for use as a prn analgesic.

OxyContin 80 mg and 160 mg Tablets ARE FOR USE IN OPIOID-TOLERANT PATIENTS ONLY. These tablet strengths may cause fatal respiratory depression when administered to patients not previously exposed to opioids.

I was in an auto accident March 28, 2019. EMTs did a great job scraping me off the road. The medical team at Queens was excellent ensure I would live. They demanded I take opioids. I repeatedly refused — yet they gave me a Tramadol prescription anyway. I had refused! NO, NO, NO! 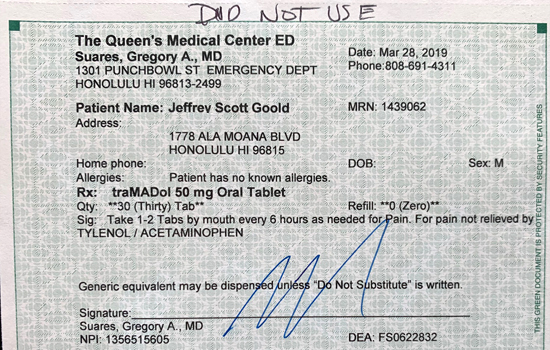 Hospitals and providers want Top Ratings for pain control and management. They over-prescribe opioids as a result. As I have noted frequently, I was fired by Hawaiian Electric CEO Connie Lau for using medical cannabis. She wouldn’t have treated me as a leper and second-class citizen had I been on a deadly, addictive opioid.

Constance Hee Lau should be executed for being a national traitor. She forced thousands of workers to make poor decisions and prevents some 26,000+ suffering medical cannabis patients from working within the company. Only in Upside Down World is an ignorant CEO who pretends to be a medically-trained professional considered compassionate and remarkable. Connie Lau is neither.

As legal cases against the opioid industry accelerate, so do concerns about how to spend money from verdicts or settlements from the pharmaceutical industry. It’s almost like a set up. Elected officials support the FDA and DEA — authorizing drugs that addict and kill Americans. Then, after enough of us have suffered, politicians sue drug companies to fill their coffers and make themselves appear to be useful.

Some 400,000 Americans have died from opioid overdose since 2000. Had they ALL used medical cannabis, ALL would be alive today.

Some 400,000 Americans have died from opioid overdose since 2000. Had they ALL used medical cannabis, ALL would be alive today. Get rid of elected officials, FDA, DEA and The People would have used cannabis instead of opioids.

It is well-known today President Nixon launched the War on Americans who used drugs as a way to lock up Black people and anti-war activists in 1969. Per his own top advisor:

“The Nixon campaign in 1968, and the Nixon White House after that, had two enemies: the antiwar left and Black people.”
John Erlichmann, Nixon’s Domestic Policy Chief, 1994

“We knew we couldn’t make it illegal to be either against the war or Black, but by getting the public to associate the hippies with marijuana and Blacks with heroin, and then criminalizing both heavily, we could disrupt those communities. We could arrest their leaders, raid their homes, break up their meetings, and vilify them night after night on the evening news.”
John Erlichmann, Nixon’s Domestic Policy Chief, 1994

The U.S. public learned recently about the racist nature of former and revered Republican president Ronald Reagan, as he was speaking to current President Richard Nixon in October 1971.

The California governor phoned the president at the White House and vented his frustration at the delegates who had sided against the United States:

‘“Last night, I tell you, to watch that thing on television as I did,” Reagan said. “Yeah,” Nixon interjected. Reagan forged ahead with his complaint: “To see those, those monkeys from those African countries—damn them, they’re still uncomfortable wearing shoes!” Nixon gave a huge laugh.

Elected officials failed all of us. Hospitals and providers addicted us. Community leaders forced us into poor decisions. Now they blame Big Pharma to distract us from their culpability.

Welcome to Upside Down World.

2 thoughts on “Dozen Dispensaries of Medical Cannabis in Hawai’i”