Writing in Civil Beat, Hawai’i state senator Jarrett Keohokalole and state representative Daniel Holt (below) pointed out when Hawai’i joined the union as a state in 1959, officials promised to take responsibility for implementing the Hawaiian Homes Commission Act of 1920. The Act was established for the benefit and purpose of returning Hawaiians to their native lands through residential, farming, and ranching homesteads.

The fact there even is a waitlist is an abdication of the promise Hawai’i made to secure entry into the union. As a state, it is our original sin. We as lawmakers and leaders must take steps to address it before more beneficiaries die waiting for a home.

Similar to many treaties or agreements with indigenous people in America, this is another broken promise, and has been both a failure and controversy. On January 17th, the state observes 128 years since the overthrow of Queen Lili’uokalani and the Hawaiian Kingdom.

The two elected officials note to date, more than 2,000 Native Hawaiian beneficiaries have died while on the Hawaiian Homes waitlist, and 28,000 beneficiaries currently remain on the list, half of which are over age 60.

Many in the state believe current governor, David Ige, has abandoned and forsaken the interests of Native Hawaiians. Ige is considered by most to be a weak and ineffective leader. He seems to have a difficult time making decisions or moving forward in a progressive manner. 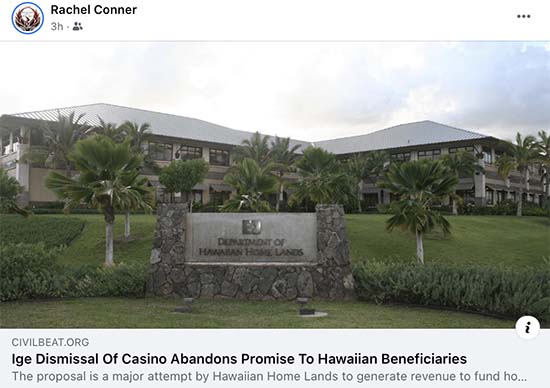 One proposal is to build a casino in Kapolei that would help fund the Department of Hawaiian Homelands. DHHL Deputy Director Tyler Iokepa Gomes (below) spearheaded the planning effort. He projects a casino would generate at least $30 million a year to fund home development, and this is the first attempt in recent history for DHHL to generate a plan that would issue leases to every beneficiary on the waitlist.

Gomes presented a sobering overview of DHHL’s financial position. The department estimates it could take 182 years to clear its waitlist for homelands, in part because of state finances but also because not all of the 200,000 acres held in the DHHL land trust can be developed.

In 2015, a Hawai’i Circuit Court judge ruled the state underfunded DHHL to the tune of $28 million a year. Additionally, in June, the state lost an appeal of a class-action lawsuit brought by Native Hawaiian beneficiaries on the DHHL waitlist for failing to provide them with homes. Damages from that case are expected to result in cash payouts of potentially tens of millions of dollars.

The DHHL casino proposal would create a Hawaii Gaming Commission tasked with overseeing the “one private company” that would operate a resort-casino on DHHL lands across from the Ka Makana Alii shopping center. The Commission would levy a 45% tax on gaming revenues earned by the private entity that operates the resort.

Of this revenue, 75% would go to the DHHL fund for housing and land acquisition; 5% toward rehabilitation programs for Native Hawaiians; the state’s general fund would receive 15%, while the remaining 5% would go to pay administrative costs of the gaming commission, job training, roads and to create a program for problem gamblers.

This is a terrible idea.

First, the proposal gives 55% to outside haole developers. This is Kanaka land — 100% should go to Hawaiians. If a casino is designated for the area, they should build and operate the facilities. Native Hawaiian (Kanaka) activists consider those who voted FOR the casino to be traitors. 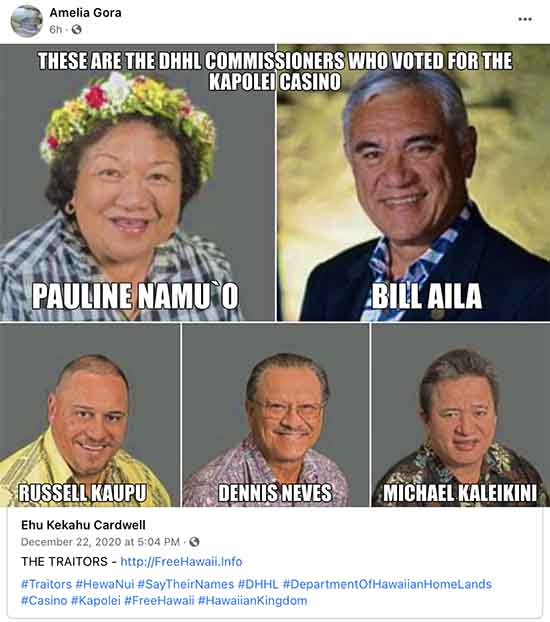 Second, a local casino is a “NET” zero proposal. If a resident spends money at the casino, they will likely be forced to reduce spending elsewhere. Economists refer to these as “substitute” goods. For example, maybe they drop $100 at the casino. Now, they won’t have funds to eat out at a local restaurant. To the island economy, this ends up as a “net” of zero.

People fly to Las Vegas, for example, to gamble or see shows. Tourists won’t visit Hawai’i simply to gamble. It’s easier to go to Las Vegas or other mainland locations — and there are now many gaming operations on mainland.

State senator Kurt Fevella and Republicans also oppose the proposal. Republicans in Hawai’i are “social conservatives” rather than libertarians more common to mainland. While President Trump and followers stand for freedom, small government, low taxes and regulation, conservatives in Hawai’i consider it their duty to dictate to others how to live.

This is one reason Trump only received 34% of the presidential vote in the islands. Both Democrats and Republicans further “nanny government” in the islands. Elites treat residents as children in need of guidance. Not much freedom in the islands. 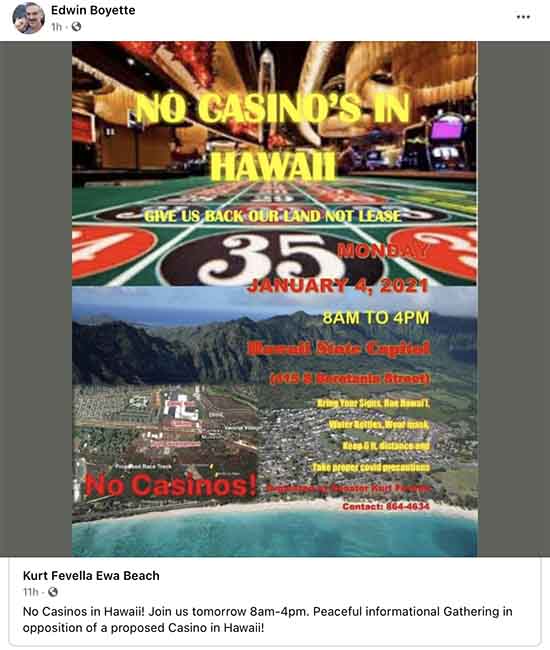 Locals in Hawai’i, as well as visitors, are already spending money for cannabis in “illegal markets.” The solution is to legalize cannabis, create new small business opportunities, stop spending money on minor possession enforcement and capture the revenue that is currently going to criminal enterprises.

Youth consumption of cannabis is going down in Colorado and other legalized states and that it’s “a good thing” even if we don’t understand why.
White House Office of National Drug Control Policy’s National Marijuana Initiative

Importantly, numerous studies released by Colorado officials last year show youth cannabis consumption in the state “has not significantly changed since legalization” in 2012. Data from Washington state suggests declining youth cannabis consumption could be explained by replacing the illicit market with regulations or the “loss of novelty appeal among youths.” Regulated markets better protect our keiki.

Time to END the racism and failed promises in Hawai’i.

One thought on “Cannabis Not Casino Is The Solution for Hawaii”