On January 17, 1893, the Hawai’i kingdom was overthrown when a group of businessmen formed the 13-member Committee of Safety and forced Queen Lili’uokalani to abdicate her throne. Three of Hawaiian Electric’s five executives, President William W. Hall, Treasurer Jonathan Austin and Thomas May, directed the Committee that committed the atrocity.

In February 2019, executives of Hawaiian Electric terminated me for my prescribed use of medical cannabis. The State of Hawai’i legalized the medication in 2000. About 94% of Americans support allowing adults to legally use cannabis for medical purposes if their doctor prescribes it.

I was 62 years of age at the time and have suffered numerous injuries and surgeries (below). I specifically asked my assigned HR rep about my medication. She informed me I would be fine.

And, why wouldn’t I? Had served the company for six months as a “non-safety sensitive” IT employee. We work in backrooms and fix your computer, databases or applications. Don’t use cannabis recreationally. Medicate only at night prior to bed to reduce pain so I can sleep; never before or during work hours.

Some doctors prescribed opioid pain medications. These are deadly and addictive. My medical team instead recommended cannabis. To a professional employee, a termination related to a drug violation is a career-ending incident.

As such, I have become a Poster Boy of the unfairness, stupidity, and lack of science and reason associated with the prohibition of cannabis. U.S. Senator Bernie Sanders pointed out there were more Americans arrested for possessing cannabis than violent crimes in 2019.

Hawaiian Electric’s HR director Shana Buco claimed I presented a “danger to my coworkers, the company and general public.” Shana has no evidence to support her slanderous charge. How would you feel being dismissed under such conditions? To me, this cruel act is tantamount to rape.

SEE All I Want for Christmas is My Rapists Held Accountable

The world has changed in 128 years. Men led the overthrow of the Hawai’i monarchy; women directed this criminal justice atrocity. Hawaiian Electric CEO Connie Lau, attorneys Susan Li and Thao Tran, and HR director Shana Buco have never apologized to me or the other 30,000 medical patients for treating us like second-class citizens and lepers. 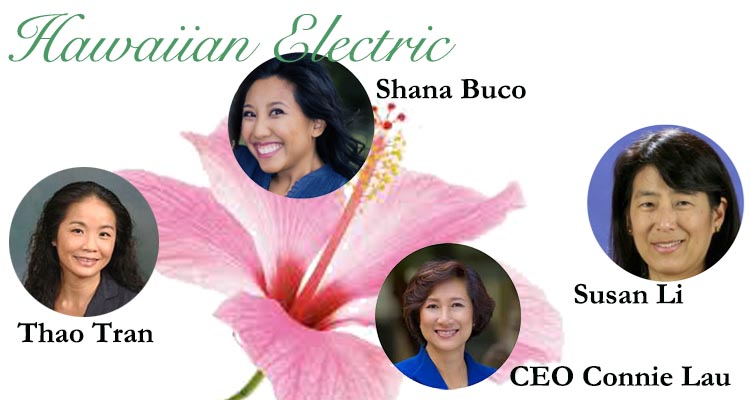 Illinois Admits Mistakes of the Past

“We can govern with the courage to admit the mistakes of our past — and the decency to set a better path forward.”
Illinois Governor J.B. Pritzker

The Cannabis Regulation and Tax Act, legalizing cannabis in the state, required government to expunge 47,000 cannabis-related arrest records created between 2013 and 2019 by Jan. 1, 2021. The state also expunged all 492,192 state-level records.

“Dismantling decades’ worth of criminal justice atrocities will take years. That’s evidenced by how this country handles cannabis. We must never stop chipping away at that painful history. I’m proud of these critical first steps.”
Illinois State Sen. Majority Leader Kimberly Lightford (D)

Over 20 Years Chipping Away at America’s Painful History

Today is another historic and blessed day for criminal justice activists like me. In an article published October 14, 1999, I wrote in opposition to the War on Drugs, “Our jails and prisons house more inmates than ever before. Inmates are predominately from minority groups. These figures do not suggest we are winning the war. While the social costs of illicit drug use are significant, they are less than the social costs associated for both alcohol and tobacco use.”

I pointed out more than 1.8 million Americans were incarcerated as of January 1998. One in every 117 men in the U.S. was incarcerated in a state or federal prison at year end in 1997. More Americans were behind bars than on active duty in the armed forces.

Importantly, the high rate of incarceration was spread disproportionately among different ethnic groups. In 1996, the rates were:

Hawaiian Electric pledges to be a good corporate citizen by pursuing ‘imi pono ~ to strive to be righteous. For nearly two years, I’ve requested they join with me in ho’oponopono. This Hawaiian word comes from ho’o (“to make”) and pono (“right”). Repetition of the word pono means “doubly right” or being right with both self and others. In a nutshell, ho’oponopono is a process by which we can forgive others to whom we are connected. The company refuses me. 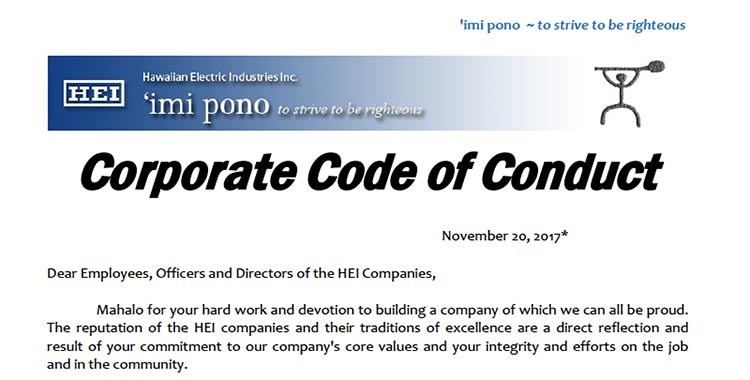 Wrote to Senior Associate General Counsel Thao Tran again last week:
Aloha and thank you for your email. I am currently out of the office on vacation and unable to respond to your email at this time. Should you need immediate assistance, please contact me on my cell at (808) XXX-XXXX and leave a message. I will do my best to respond promptly to your email when I return on Monday, January 4, 2021.

Thank you for your understanding and Happy Holidays!

On December 30th, I answered:
Aloha e Ms. Tran,
Received your automated response. Happy to hear you’re getting time to be with family. Thought I would take a minute to reach out to you. We’re coming up on two years since my dismissal. I’m certainly not a legal expert such as you, but know one thing … Hawai’i Civil Rights Commission would have dispensed with my complaint long ago had my case been without merit. They’re too busy to leave dead-end grievances lying around. You and I know Hawaiian Electric did not handle this properly.

The people at Hawaiian Electric are my family. Not seeking to fight with this company. Employees are bright, competent and talented professionals. As you’re with the company, I know you’re similar. Looking at your professional picture, I can tell you’re kind and compassionate. Ms. Buco spoke highly of you. Can you and I have an honest conversation with each other?

I lost my mother in 2015. Work is my life and family. Lori Yafuso is the best supervisor and manager I’ve ever had. The IT team is the most competent and professional of colleagues. Had trained for years to be deserving of joining the team. This opportunity was a perfect fit for all of us.

[1] On May 3rd, you wrote:
“As mentioned in my previous phone conversation with you, the Company is discovering on a regular basis [his] continued misrepresentation of, among others, our company’s relationship with him, which was never an employer-employee relationship. [He] was never an employee of the Company and was not terminated from our Company. The Company has concerns with such misrepresentations.”

On February 20th, HR confirmed I had been selected for the internal position. Was told my official start date would be February 25th. This was a verbal contract. February 22nd was my final day as a contracted employee. When I arrived at 7:30am on Monday, per the agreement, I was a HECO employee. When Ms. Buco terminated me around 11:30am, she was dismissing an employee of the company.

[2] In the May 3rd letter, you claim justified to follow U.S. ADA guidelines citing a number of cases that show the “textual similarity” between Hawai’i and U.S. policy. Yet regarding cannabis, the U.S. and Hawai’i are dissimilar. Medical cannabis has been legal in Hawai’i since 2000. This reasoning is not logical. The company should have spoken with me prior to dismissal.

You claim I may not have informed the company. False. I did. You claim “arguendo” if I did, Ms. Deer may not have reported this to her superiors. I don’t know what she did. She represents the company and I informed my assigned rep.

More importantly, you claim the company was not notified prior to my dismissal. False. I did and Straub did. Dr. Kusaka informed the company by phone and followed up by letter February 19th. I would only have a “marijuana certificate,” as he phrased, if “the qualifying patient has been diagnosed by a physician as having a debilitating medical condition …” HI Rev Stat §329-122 (1).

The legislature clarified the state “329” statute regarding a “marijuana certificate” in 2015 for all medical purposes. Due to my injuries, I’ve been under continuous medical care for a number of years.

“For the purposes of medical care, including organ transplants, a registered qualifying patient’s use of marijuana in compliance with this part shall be considered the equivalent of the use of any other medication under the direction of a physician and shall not constitute the use of an illicit substance or otherwise disqualify a registered qualifying patient from medical care.”
HI Rev Stat §329-125.5 (b).

Your “super lawyer,” Mr. Ernst, warned companies in August 2018 to update substance use policies and treat everyone the same. This was the company’s responsibility. You and I know they neglected their duty.

HEI Code prohibits “possession or the unprescribed use” or “distribution of any controlled substance or illegal drug.” I did not engage in any of these behaviors. I therefore passed the company pre-employent screen.

[3] You wrote in the May 3rd letter:
“The legislature could have very well provided employment protection for qualified medical cannabis users, just as it carved our protection against prosecution involving cannabis and searches and seizures pertaining to the misapplication of the medical use of cannabis … it did not.”

Likewise, had Hawaiian Electric intended to prohibit medical cannabis, they should have stated simply, “Medical cannabis not permitted.” The company did not.

I also believe we both agree about the intent of the legislature. Statute is clear: “The authorization for the medical use of marijuana in this section shall not apply to … In the workplace of one’s employment.” HI Rev Stat §329-122 (c) (2) (B). I medicated only at home per the law; never in the workplace of Hawaiian Electric.

In this section, statute also specifies medical use of marijuana shall not apply to, “(A) In a school bus, public bus, or any moving vehicle …” Certainly, the legislature didn’t intend to deny patients like me access to public buses due to my legal use within my home.

There is no federal, state or local policy requiring an employer to restrict an employee’s legal right to medicate at home — or penalize an employee for doing such. The company’s argument is legally illogical.

Again, borrowing your words, “There is no such link in this case [that I medicated in the workplace] and the company cannot prove otherwise.” I agreed to drug test and would have submitted to a DOT-sanctioned blood test. The company choose to use the inexact urine screen.

[4] In your April 12, 2019 letter, you stated the company maintains a “drug-free workplace policy.” I received only the HEI Corporate Code of Conduct. These policies must be written and comprehensive. The included information says a “single-page document will simply not suffice.” I didn’t even receive a one-pager. See “Eight Elements Every Drug-Free Workplace Policy Should Include” in comment section below.

I’ll keep this confidential if you are willing to engage in discussion with me. If I don’t hear from you, I’ll publish this for public review. Wish you a wonderful day!

I didn’t hear back from the corporate attorney. Wonder why?