By now, most of you are aware the tragic history of Hawai’i. The Aloha state was born in theft. In 1893, business leaders led by the newly-formed utility company, Hawaiian Electric, kicked Queen Lili’uokalani off the throne of the legally-established Hawai’i Kingdom.

Current Hawaiian Electric CEO & President Constance Hee Lau continues discrimination against indigenous culture. Think the assault on our Capitol was frightening? Sierra Club of Hawai’i details the coup many have forgotten 128 years ago.

SEE How Hawaiian Electric Powered the Illegal Overthrow: Injustice from the Start 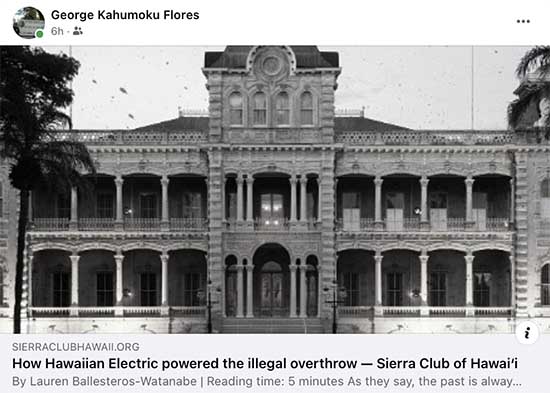 The 19th century MAGA Supporters quickly installed a president, Sanford B. Dole, for their new government. The Republic of Hawai’i collapsed when the United States of America claimed the islands to be a protected territory about five years later. Hawai’i became the 50th state in 1959.

In this battle for land and power, the Native Hawaiian people (Kanaka Maoli or Kanaka) were marginalized. Their culture was ridiculed. The American-backed government forbid the Kanaka to continue their language, many of their traditions, and even name their children using Hawaiian names. The prohibition on child names wasn’t removed until 1967. Prohibition of Hawaiian language, ʻŌlelo Hawaiʻi, wasn’t repealed until 1986.

How does the state raise the needed funds to meet their obligations to the Kanaka? Elected officials won’t levy taxes on residents or visitors. Thus, I proposed one possible solution:

SEE Cannabis Not Casino Is The Solution for Hawaii

Another proposal projecting to generate at least $30 million a year to fund home development is a casino on native land. Many tribes on the U.S. mainland have developed resorts with casinos. My wife is from New Mexico. The Sandia Casino near her home is beautiful and highly-rated by the public. Native Americans are considered sovereign. Kanaka have never received official recognition.

The casino project is the first attempt in recent history for Department of Hawaiian Home Lands (DHHL) to fund and issue leases to every beneficiary on the waitlist. Hawai’i Governor Ige immediately opposed the plan. So did most of the governor’s friends and privileged elites.

Conservatives, such as Jenny Boyette and Choon James express Huge Mahalos to Governor Ige, Senator Kurt Favella and many others! Republicans led the overthrow of the Hawaiian Kingdom. Ironic they consider a casino or gambling to be a vice industry.

They claim the winners are the owners and gaming operatives, as “it naturally attracts the wrong crowd. This vice industry is exploitative and creates multiplier social problems.” I’m certain the Kanaka consider all of them to be part of a vice industry that exploit the islands, the Polynesian people, and have created “multiplier social problems.” 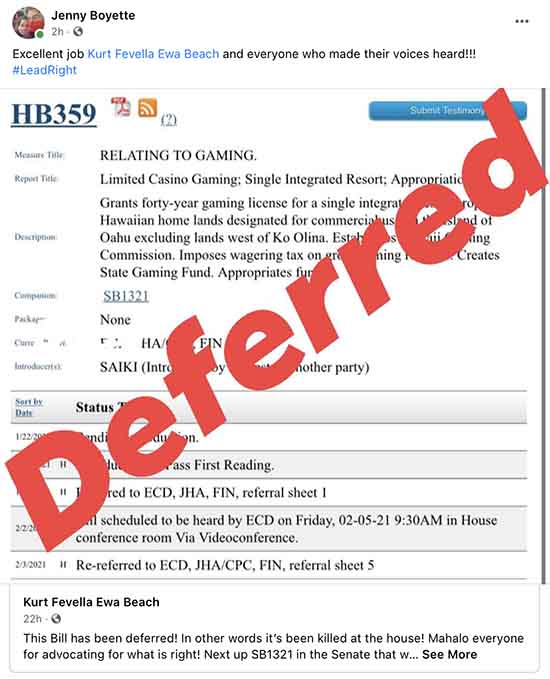 Why? Those in power earned their wealth and prestigious positions exploiting the islands and people. Tourism and the visitor industry drives the island economy. Anything or anyone who disrupts this status quo is a threat to the power structure.

Wealthy individuals and visitor industry corporations fund politicians and advertise in local media. Media in turn posts favorable news and editorials that prop up the oligarchy. Hand-in-hand, these brokers of power continue a system that exploits labor, overcharges visitors and blocks progress. A casino would upset this balance. The Kanaka would have a resort/hotel complex with amenities better than all other existing facilities. The non-Kanaka population, haoles or foreigners, simply will not allow this to happen.

Outsiders stole this land. They’ve failed their legal obligation to the Native Hawaiian population for generations. They refuse to tax themselves and block any project that would shift the balance of power away from their self interests. They continue to cheat the Kanaka Maoli.

Timmy (below) believes he’ll die before the state meets it’s obligation to his and other Native Hawaiian families. Sadly and tragically, I believe he is right.

Love you, my brother Timmy. Thank you for the time talking story; teaching me ukulele in our kanikapila sessions; and sharing medicinal pakalolo under the stars. It’s time to take YOUR independence back. 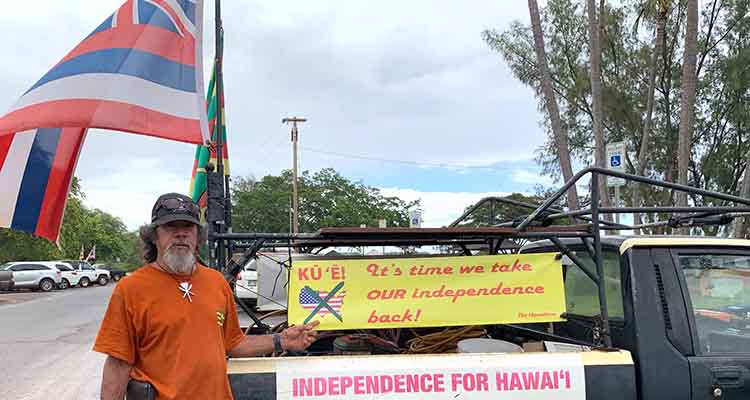 Kanaka Maoli Have No Voice

David Ige is not Kanaka. He’s the first person of Okinawan descent to be elected governor of a U.S. state. Why does he have a say in the affairs of Native Hawaiians? For that matter, why does anyone who isn’t Kanaka have standing to make a claim over the rights of Native Hawaiians?

Nationally, a person being sex trafficked in a hotel/resort setting is forced, coerced or intimidated to perform sex acts on an average of 5 to 10 customers per day.

Needing a cover for their Machiavellian manipulation, local media featured a Temperance Movement of feminist women. A state agency working toward equality for women and girls issued a report, which StarAd writer Sophia Cocke claimed to be blistering, outlining ills associated with casinos, particularly as they relate to the sex trade. 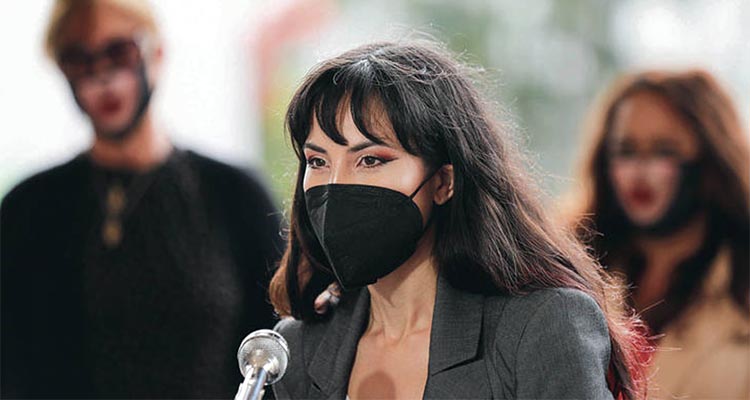 “Casinos bring more than just revenue. They bring a bachelor party culture,” said Khara Jabola-Carolus, executive director of the Hawai’i State Commission on the Status of Women (above).

Khara apparently is a fan of Hollywood movies. The Hangover (2009) tells the slapstick story of Phil Wenneck, Stu Price, Alan Garner, and Doug Billings, who travel to Las Vegas for a bachelor party to celebrate Doug’s upcoming marriage.

Personally, I’ve been to Vegas at least 50 times. Not a gambler; never for a “bachelor party” outing. My wife and her mother have. They dropped a few bills in the gaming area, enjoyed shows, fine dining and excellent shopping opportunities. There are many “bachelorette parties” in Vegas. There are many in Hawai’i as well.

Hawai’i Feminists distort the data, as the analysis doesn’t simply review “casinos.” Sex trade occurs in “hotel/resort” settings, and Hawai’i is one of the leading “hotel/resort” destinations in the world. The “illegal” or undocumented community is also vulnerable to sexual assault and rape.

The political Left encourages illegal immigration. Who protects young boys or girls who live in shadows? Ending illegal entry would have a huge positive impact reducing sex trafficking and protecting girls and women.

Ms. Khara demonstrates quite a bit of misandry, “We’re all familiar with the slogan ‘What happens in Vegas, stays in Vegas,’ and what research indicates is when men gather to spend money on leisure and relaxation, including paid sex, it necessitates filling that demand.” 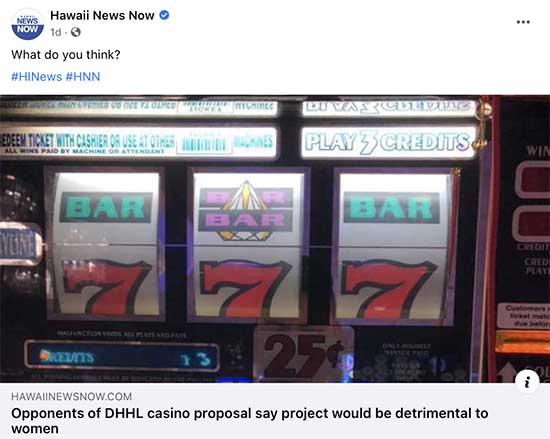 Although there are no casinos in Hawai’i, men can — and do — seek paid sex. Rumor is Century Tower in Honolulu is a common location to solicit prostitutes. There are over 40,000 hotel units in the islands. There are countless strip clubs, massage parlors and adult clubs. Prostitution is the world’s oldest profession. Blocking a casino won’t change this. Just as prohibiting alcohol didn’t end consumption.

According to law enforcement, there were 46,086 total ads posted for commercial sex in Honolulu in 2019. None related to a casino. This is a valid criticism — but of existing hotels/resorts in the islands. Should we remove all of these dens of iniquity?

Research from Arizona State University found there is a larger incentive to sex traffic women and youth in Hawai’i compared to other major American cities due in part to the “large tourism and military presence.” The authors claimed an estimated one in nine men on O’ahu are potential online sex buyers and one of three are tourists or military personnel. None of this activity occurs in casinos, because there are no casinos.

Elton Freitas (below) publicly opposes the casino proposal. Yet it’s military personnel in Hawai’i who are the problem. Ironic, isn’t it? Maybe he should first clean up his own house before casting judgment on a Native Hawaiian initiative. 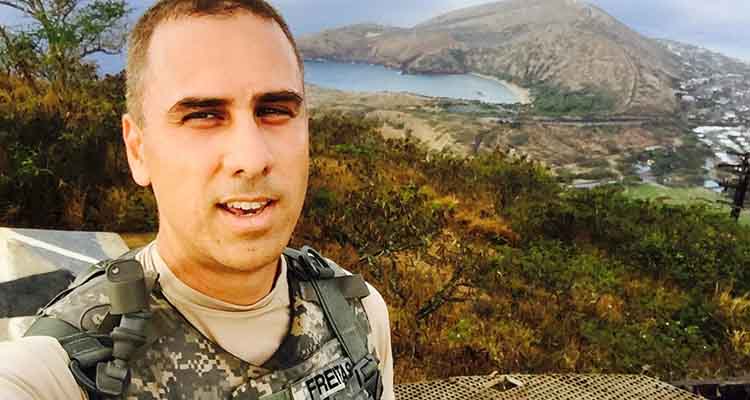 Hawai’i thrives due to tourism, hotels and resorts. The islands are also dependent upon military presence. Khara and the feminists do not demand the U.S. to remove military personnel or bases. These ladies make a living in Hawai’i in part due to the hotels/resorts and tourism industry. Reading their report, it sounds like they would prefer to remove all men from the islands. This isn’t likely to happen either.

Research is clear. Men and women have different levels of gambling involvement, with men having higher levels of engagement and problems than women. Research also shows men are more “risk-taking” than women. Men are more likely to take risk in the stock market for example.

Boys deal with more risk in their lives than do girls. Society still prepares males for war; females for more nurturing-based activities and occupations. These images came from the last pre-pandemic Memorial Day parade in Hawai’i. Gender biases continue to run deep. Maybe we should send our girls to war and teach boys to be nurturing?

Research also indicated 2.9% of women were problem gamblers compared to 4.2% of men. Winters et al. (1998) found that 91% of college men and 84% of college women reported engagement with gambling (gambling at least once during the prior 12 months period). Both sexes gamble.

Tomorrow, Super Bowl Sunday will witness massive levels of gambling across the nation. There will be an increase in sex trades. Women will host parties (as COVID19 precautions allow). There will be massive quantities of alcohol consumed. Although it’s an urban legend this day is the most dangerous for domestic violence, all these factors lend to an increase in negative behavior. 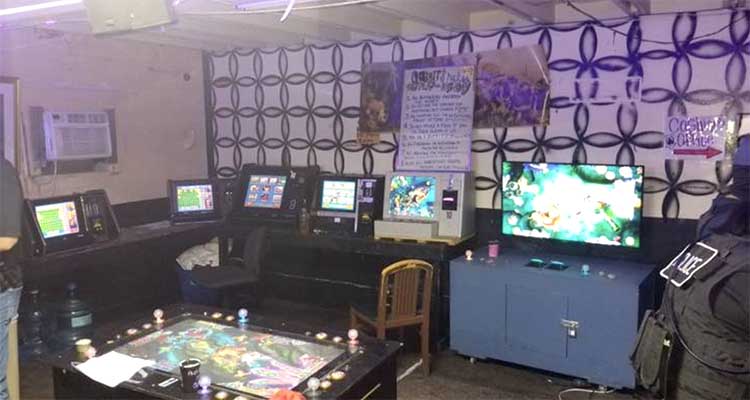 Not one single activity is the culprit. Abuse is part of a cycle and not just an isolated event caused by high stress. Likewise, a casino doesn’t trigger more occurrence. We know this as these problems have been in Hawai’i for generations — and there isn’t a casino. Honolulu police just seized more than a dozen gambling machines (above) during a raid at two illegal game rooms in Kaka’ako near the end of January.

“The big thing that has changed is there are remedies, there are systems. That’s a good progress story,” said Elizabeth Baker, co-founder of Safespace Foundation Miami. She has been working for almost 50 years with survivors of domestic violence. “One of the things that we have not changed is how often it happens.”

Elizabeth should be speaking about the Native Hawaiians. One of the things privileged officials here have not changed is how often the Kanaka are cheated. Sorry, brother Timmy!