In the final days of Election 2016, Hillary Clinton became frustrated and nasty toward Trump and Bernie supporters. She labeled the former “deplorables” and BernieBros “basement dwellers.” Hillary’s team was heavily-dominated by women. Trump had waged a vicious campaign of negative attacks and Hillary now directed her animosity toward men.

Americans have since polarized to extremes. All seem to be angry. Depending on one’s tribal affiliation, they evaluate events relative to their worldview. As a political scientist, mediator and professional who seeks to resolve conflict and reach common ground, I know as social alienation increases, tolerance, understanding and empathy decrease. Aloha disappears.

Tulsi Gabbard is an experienced civic and military leader. She knows aloha is the glue that can bind us together. In the distressful period of conflict between Whites, Blacks and government in the 1960s, Martin Luther King, Jr. called this glue “love.”

“Love is the greatest force in the universe. It is the heartbeat of the moral cosmos. He who loves is a participant in the being of God.”

Speaking on The Rubin Report, while the U.S. Capitol was being stormed January 6th, Tulsi posed the question, “What’s driving this?” She believes political leaders fuel divisiveness for their personal benefit; media riles up people for their ratings; big tech monopolies use their algorithms on social media to continually push and push, and all add fuel to the flames of discontent.

Dave Rubin points out we don’t have a respected group of people that kind of brings us together across the board. He believes trust simply doesn’t exist anymore. He suggested to Tulsi it feels like the violence and discontent was inevitable, “In a weird way, we all deserve it for being part of it.”

“Months ago … months ago … was maybe one of a few people who warned of Civil War if we continue down the path that we are on. I think that what we are seeing now with this divisiveness that exists very much online now being translated into action further points in that direction — unless we as a country do something about it.” Tulsi Gabbard

“We need servant leaders in place leading with what we in Hawai’i call aloha. You and I’ve talked about this before. Aloha is saying “Hey, I respect you. I open my heart and I love you as a fellow person, as a child of God, as a fellow American, and whether we agree or disagree on different issues, whether we come from different backgrounds or not, we’ve gotta be able to come together on this shared common ground and work for the betterment and the well-being for the country.” Tulsi Gabbard

“The danger of what we’re seeing playing out today is this normalization of violence — where violence and lot of the riots that we’ve seen over the last year occurring — that violence is somehow okay if it aligns with your view of what these people ‘are fighting for.'” Tulsi Gabbard

As I’ve reported over the past year, was fired by Hawaiian Electric for using a legal medication for my pain and disability. Politicians have used this issue to divide Americans or make political points for their campaigns for 50 years. Cannabis was criminalized initially to target Blacks, People of Color and anti-war demonstrators.

Political agendas rather than reason and evidence-based-science drove this policy. America incarcerated millions and continues to punish human beings unjustly. We normalized this violence.

Refused to say, “Hey, I respect you. I open my heart and I love you as a fellow person, as a child of God, as a fellow American. Let’s resolve this with ho’ponopono and aloha.” Just get out — immediately! Cancelled, Deleted and Erased.

SEE All I Want for Christmas is My Rapists Held Accountable

I’m just one of some 30,000+ human beings pummeled and treated as a second-class citizen in Hawai’i. My mission is to end this injustice. Millions across the nation suffer similarly. There are simply too many broken promises and failures that fuel our collective social pain. We refuse to extend aloha to each other. As Dave said, “In a weird way, we all deserve the strife and discontent for being part of it.”

This suggests trust will continue to fall as “trusting generations are replaced by mistrustful ones.” Vallier notes the U.S. is the only established democracy to see a major decline in social trust. Research suggests three important factors — corruption, ethnic segregation and economic inequality — drive a country’s level of social trust. None seems to fully explain our loss of trust.

Americans are sorting themselves into social silos, seldom interacting with unlike-minded others, leading to less moderation and more radicalization.

Even though inequality stabilized since 2007, due to the C19 pandemic, most believe the rich have become even more wealthy and the perception of inequality has increased. Political polarization has grown dramatically and this also decreases social trust.

American presidents, elected officials and business executives are heavily polarized on both sides. They disagree and dislike one another. This passes negative attitudes to the rest of us. Hillary hated The Don; his animosity toward her was openly visible. Election 2016 was arguably the most bitter in generations. Hillary conceded, but told her supporters to RESIST. Donald refuses to even concede today.

Beginning around July 16, 2019, protesters in Hawai’i blocked access to the roads at the base of Mauna Kea on Big Island of Hawai’i. They called themselves protectors. Mauna Kea is a dormant volcano about one million years old and stands 13,803 feet above sea level.

Mauna Kea is an excellent perch for astronomers due to its high elevation, dry environment and stable air flow. Prestigious local company Hawaiian Electric and others, assisted by the United States, overthrew the Kingdom of Hawai’i January 17, 1893.

Due to generations of government negligence, poor management and discriminatory assimilationist policies, Native Hawaiians (Kanaka) and their advocates challenged the construction of a new Thirty Meter Telescope (TMT) at the summit. Kapu Aloha was born — non-violent direct action to resist. 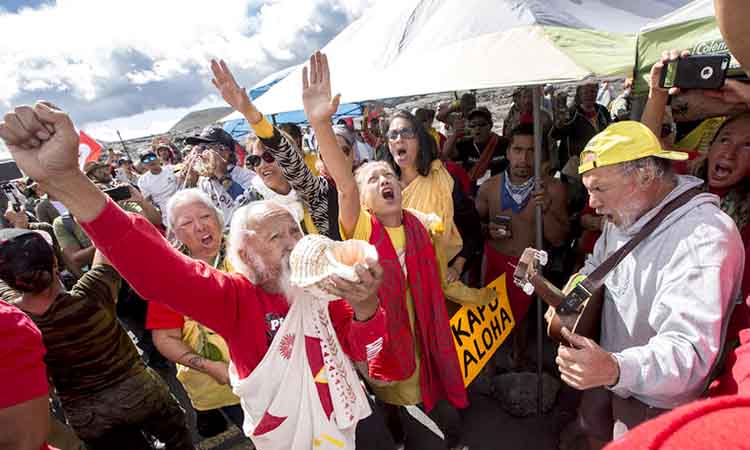 Hawai’i Governor David Ige was unable to achieve consensus to move forward. The protectors successfully blocked the road for some six months and halted construction on the project.

After the murder of George Floyd, a 46-year-old African-American male, by police in May 2020, protests challenging police brutality began in Minnesota on May 26th. Local activists began in the Minneapolis–Saint Paul metropolitan area and quickly spread protests nationwide to more than 2,000 cities and towns in over 60 countries in support of Black Lives Matter (BLM).

It’s estimated between 15 million and 26 million people participated at some point in the demonstrations in the U.S., making the protests the largest in American history. Demonstrations weren’t always peaceful (above).

The BLM movement triggered somewhat related protests by Antifa. The anti-fascism movement has been around since the days of Hitler, but this movement is much different. Antifa is a loosely connected number of groups with shared left or extreme left ideology. There’s no central governing body, no defined roles, and because of their admitted secrecy, it’s hard to know how many people count themselves as members.

Supporters generally campaign, organize, and protest, sometimes violently, against actions, people, and organizations they view as promoting authoritarian, racist, homophobic or xenophobic beliefs. They are rarely peaceful (above). 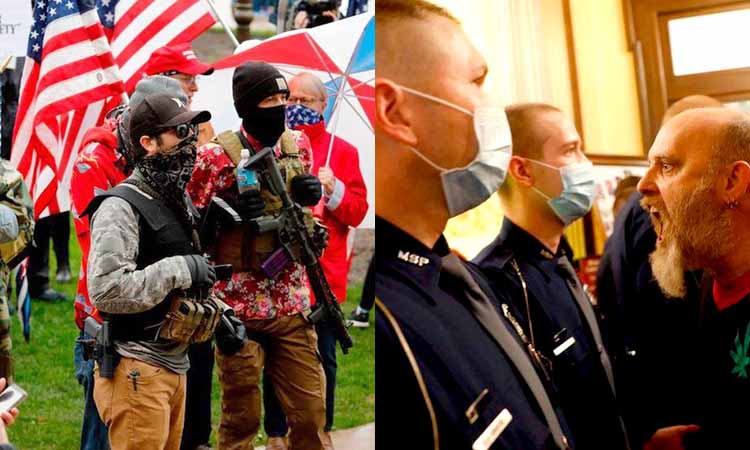 In late April, a protest dubbed the “American Patriot Rally” was organized by Michigan United for Liberty. The group called for state businesses to reopen May 1st in violation of state orders. The pandemic forced state and local government to close businesses, churches, sporting events and other venues. Fear, loss of income and distrust led to armed protesters openly carrying guns in the Michigan Senate gallery.

The rally followed an earlier protest on April 15th when demonstrators sat in their cars to create traffic around the statehouse. President Trump threw his support behind the movement at the time, tweeting “LIBERATE MICHIGAN.”

Some critics claim his tweets were an attempt to foment insurrection. Today, January 13, 2021, the U.S. House of Representatives impeached Donald John Trump with “incitement of insurrection.’ He became the first U.S. president to be impeached twice.

The House voted 232-197 in favor of impeachment and the preceding took place exactly one week after the violent assault on the Capitol — and one week before the inauguration of President-elect Joe Biden.

Americans are angry, frightened, confused and our nation is in crisis. Only a commitment to aloha will return us from the abyss. Each of us bears responsibility for our current situation and failure. Each of us must change the way we deal with others. Our lives and nation depend on it.

Live aloha or perish as a community, ‘ohana and nation.