Anyone in Hawai’i or who follows the world of surfing knows of Eddie Aikau. Edward Ryon Makuahanai Aikau (Kahului, Hawaii, May 4, 1946 – March 17, 1978) was a Hawaiian lifeguard and surfer. As the first lifeguard at Waimea Bay on Oahu, he saved over 500 people and became famous surfing the massive Hawaiian surf.

Eddie won several awards including the 1977 Duke Kahanamoku Invitational Surfing Championship. He’s not remembered for his board skills — but for his courage.

If you were in trouble, Eddie would go. If there was danger, Eddie would go. No questions asked. If someone needed help, Eddie would go. We honor people like Eddie due to his limitless courage, bravery and valor. He lived and died to ensure the rest of us were safe and secure. Eddie is a legend.

As I wrote the other day, teachers are essential employees. I know. I’m a third-generation educator. Watched my mother and father live heroically. Watched my grandparents as well. They knew a “mind is a terrible thing to waste.”

Tragically, this 9-year-old youngster died from C19. Wasn’t in school. The deadly virus is all around us. It’s an invisible killer. Yet we must march forward — together and courageously.

No question. C19 is dangerous. Eddie knew ripping 40′ surf at Waimea was deadly. He hard-charged into the waves to rescue a surfer who was in trouble. Thousands of men hard-charged the beaches of Normandy to rescue Europe from immoral Nazi aggression. 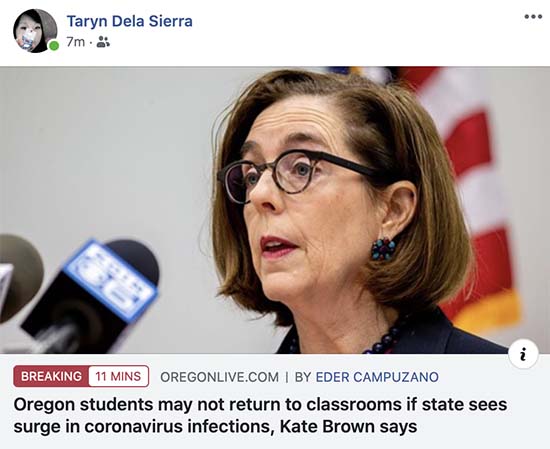 Governor Kate Brown, female, didn’t charge Waimea Bay; didn’t charge the beaches of Normandy. She was able to remain safe in her home while men did the dangerous stuff. Most teachers today are women. Are women cowards? They demand equality with men … here’s your chance. The tough get going when the going gets tough.

Women in general aren’t cowards though. As I documented last week, don’t always agree with my U.S. Congresswoman Tulsi Gabbard, but she isn’t one to run from danger. We’re in the Third World War, as I pointed out months ago. Women shoulder the heavy burden in this deadly conflict. Their efforts are heroic.

We see images of women on the front lines of protests and rioting. If they can survive dangers in our chaotic streets, they can return to the classroom. Ladies, want to be heroes? Put on your face masks, physical distance, be clean and teach our children.

Locally in Hawai’i, teachers who are primarily female register fears on social media. They’re seeking a waiver to allow reducing the 1,080 student instructional hours and 180-day school year as mandated in state law for all public schools other than charter schools. [source]

“While we can never promise that there will be zero risk in our workplaces even during the old, normal times, it is fair for you to expect that your state, complex and school leadership will do all that we can to mitigate the risks that are connected to this pandemic.”
Hawai’i Board of Education Chairwoman Catherine Payne

Stuck Between a Rock and Hard Place

America, Hawai’i and the world are not safe today. If we remain at home, we might get sick and die. If we go outside or to work, we might contract C19 and die. This is what’s called being between a Rock and a Hard Place. That’s why it’s war. No place is safe. Danger is all around us. Apparently our current class of teachers haven’t been asked to face such challenges. They’re panicked.

The Centers for Disease Control and Prevention highlighted the “Importance of Reopening America’s Schools This Fall.” They noted the benefits of returning to school, especially for the nation’s neediest children, and reminded teachers and parents “COVID-19 poses relatively low risks to school-aged children.” Those under 18 account for less than one-tenth of 1% of COVID-19-related deaths. 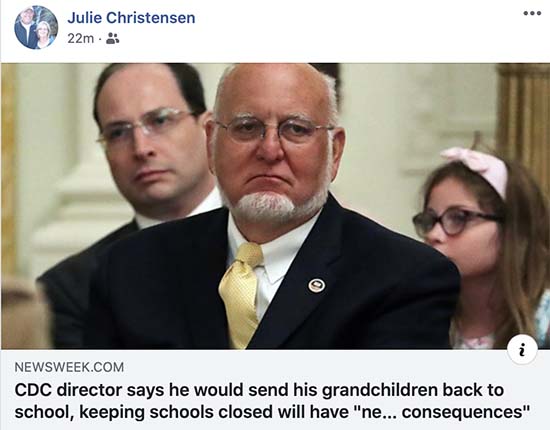 Yet the American Federation of Teachers, which represents 1.7 million school employees, issued a resolution today saying it will support any local chapter that decides to strike over reopening plans. They’re willing to fight in the streets for #BlackLivesMatter; fight Donald Trump politically. They’re not willing to fight for our children’s education. [source]

“We will fight on all fronts for the safety of our students and their educators. But if authorities don’t protect the safety and health of those we represent and those we serve, as our executive council voted last week, nothing is off the table.”
Randi Weingarten, AFT president

Weingarten claimed teachers want schools to reopen. Children need in-person instruction, she said, adding that remote instruction is “no substitute for it.” Yet the union official said teachers need to know they’ll be kept safe. Nobody is safe! Americans are getting sick and dying each day. There are no guarantees. Suck it up, buttercup!

Many teachers remind students we are privileged people. I agree. Americans live better than most people on the planet. We’re the most spoiled and pampered generation in world history. Of course, many want to stay home, receive a government check, play on social media, and hideout during the C19 global pandemic. Who wouldn’t?

At the same time, millions of Americans were classified ESSENTIAL employees months ago. They’ve been working farms; sweating in meat and vegetable processing plants; standing long days at checkout stands in grocery or retail stores; continuing construction and repair projects. None receive hazardous duty compensation. None signed on initially to a high-risk profession. They’re in danger each day. Like Eddie, they go. Teachers say no!

Our ESSENTIAL employees have been riding public transportation and suffer harassment by customers who refuse to wear face masks or comply with safety protocols. Yet they get up each morning to face death. They bring their fears — and possibly the virus — home to their families every night. They keep our bellies full and the lights on. Like Eddie, they’ve courageous. Teachers are not!

Liberal NYTimes criticized those who refuse to wear a face mask calling them selfish. A cult of selfishness is killing America, in their opinion. A culture of selfishness pervades our legion of teachers. Just as people need to wear a face mask, educators need to put on their Big Girl panties and return to the classroom. There are new formats: In-person, online, hybrid and blended. The school bell is ringing.

Teachers? Bueller? Anyone?  They claim they’re scared. “Now they’re afraid and angry,” AFT president said. “Many are quitting, retiring or writing their wills.” This is complete cowardice. I’m truly disappointed in the ranks of educators. They should be leading, not seeking reasons and excuses not to instruct our children.

Don’t want to teach. Then don’t take food from those who are currently sacrificing and risking death. Don’t expect hospitals to serve you or medical providers to care for you. It’s either One For All and All For One … or get out! America doesn’t welcome cowards. Stay home and be branded.

As I’ve said numerous time, I will go. America has always needed the heroic service of a few good men and women. A small handful stood up to King George III. John Lewis, Martin Luther King, Jr and a small group stood up to racial injustice. Rosa Parks sat alone on a bus in protest. Eddie went alone. I will go. I know millions of teachers are ready and willing. Don’t let the fear-mongers destroy our children’s future. Life is risk. Be a hero, not a zero!