I was raised to support liberal values. This political doctrine believes protecting and enhancing the freedom of the individual is the central concern of politics, and generally, considers government to be necessary to ensure individuals are not harmed by others. A liberal seeks “safe spaces” that are open to all and inclusive of all. Unfortunately, as I have written previously, the modern political Left has gone insane.

I recently collaborated with a liberal woman who shamed police, the NRA and gun-owners for allegedly promoting gun violence, while encouraging her young son to point weapons at other human beings. Facebook banned me 30-days for posting what they labeled “hate speech” about the behavior. Facebook banned me a second time for 30-days for writing about my experience in high school with a sexually-aggressive, drunken, older coed in defense of student-athlete, Brock Turner. While liberals may claim a desire for “safe spaces,” this applies only to friends and those of similar political beliefs.

I’ve criticized liberal Huffington Post writers who claim to support women for only championing women on the political Left. I’ve featured research showing liberal women are the most likely to “unfriend” those who express divergent political opinion. Although women (rightly) demand consent in sexual situations, I ridiculed Katy Perry when the Left was silent for her unwanted and non-consensual assault on a virgin male teen. Kayne West announced political support for President Trump last week, and fellow musicians, like Macy Gray, Snoop Dogg and John Legend, exploded in opposition and chided him for his statements they claimed let down fans. Kanye had tweeted:

“You don’t have to agree with Trump but the mob can’t make me not love him. We are both dragon energy. He is my brother. I love everyone. I don’t agree with everything anyone does. That’s what makes us individuals. And we have the right to independent thought.”

Writing in USA Today, Glenn Harlan Reynolds points out keeping people divided in tribes is a critical part of modern American politics. Those who say things that might make people reconsider their tribalism threatens those in power. I write to open Hearts & Minds of readers across the political spectrum. I force them to reconsider their beliefs and actions. I’m now pegged as a threat to America and have lost the good fight.

Saturday’s White House Correspondent Association dinner demonstrates the double-standard and hypocrisy of the political Left. President Trump slammed the organization and its annual meeting Monday morning, tweeting the event is “DEAD as we know it. This was a total disaster and an embarrassment to our great Country and all that it stands for. FAKE NEWS is alive and well and beautifully represented on Saturday night!” Comedian Michelle Wolf had ripped into Trump and his aides on national television.

“After Trump got elected, women started knitting those pussy hats. When I first saw them, I was like, ‘That’s a pussy?’ I guess mine just has a lot more yarn on it.”

Many consider Wolf’s routine to be filthy and raunchy. She included jabs at White House press secretary Sarah Huckabee Sanders, presidential advisor Kellyanne Conway and others. Her performance resulted in a mixture of laughter and uncomfortable silence from the audience of journalists and guests. For example, should we say pussy? Wolf appears to have crossed the line of civility, “After Trump got elected, women started knitting those pussy hats. When I first saw them, I was like, ‘That’s a pussy?’ I guess mine just has a lot more yarn on it.”

Wolf spoke previously about Conway, “When she’s done talking, I don’t know if my mouth is my ass or my ass is my mouth.” The comedian seemed to go full mean on Ms. Sanders. My Facebook friend, Cindy Williams Swam, found Wolf’s performance “disgusting.” She considers bullying to be bullying.

Cindy Williams Swan, “I find it disgusting how ppl can think bullying is okay in any form. I don’t care what side you are on we are all Americans and need to work together. We teach children not to bully in schools then adults bully each other. Double standard thinking bullies!!!”

We are graced with Sarah’s presence tonight. I have to say I’m a little star-struck. I love you as Aunt Lydia in The Handmaid’s Tale. Mike Pence, if you haven’t seen it, you would love it.

Every time Sarah steps up to the podium, I get excited, because I’m not really sure what we’re going to get — you know, a press briefing, a bunch of lies or divided into softball teams. “It’s shirts and skins, and this time don’t be such a little bitch, Jim Acosta!”

I actually really like Sarah. I think she’s very resourceful. She burns facts, and then she uses that ash to create a perfect smoky eye. Like maybe she’s born with it, maybe it’s lies. It’s probably lies.

For liberals who claim to seek “safe spaces” that are open to all and inclusive of all, this is insanity. It’s one thing to pick on an elected politician such as Donald Trump or Barack Obama. This demonstrates our reverence of the First Amendment. Journalists and citizens say things that would get them shot in a lesser nation. Poking at unelected civil servants crosses the line. It’s better to be respectful and gracious. Cindy shared a post by Benny Arthur Johnson who defended Sarah. We must remember we are One Tribe — a tribe of humanoids on a lonely planet in a galaxy far, far away. 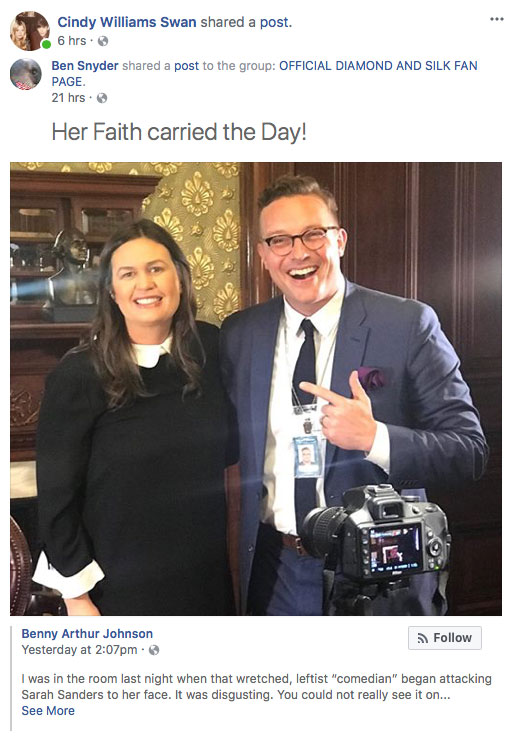 I was in the room last night when that wretched, leftist “comedian” began attacking Sarah Sanders to her face. It was disgusting. You could not really see it on TV, but virtually no one in the room was laughing. I saw even some of the most liberal reporters in the profession cringe with disgust.

If a conservative comedian was so vicious to a working mother in the Obama administration, they would never get a job in the industry again. The organizers of the dinner would have cut their mic.

The double standard is sickening.

However, there is something you must know about Sarah Sanders: She is a better and bigger person than the sad leftists who attack her.

At the MSNBC after-party, I spoke with high-ranking members of Sarah’s staff. They were disgusted by the remarks – and tell me that the plan was for Sarah to walk-out if they got too personal. Sarah however, stayed firm. “I don’t know how she does it,” one of her closest confidants told me, “She kills them with kindness – she puts up with it. Good-hearted American people see that – and then she wins.”

Members of the White House press corp tell me they were sending Sarah a flower basket today – they felt so bad.

Then, Sarah Sanders walks into the party. The MSNBC party. A network that lives to savage and promote the godless vitriol that just attacked her. Guess what? Sarah Sanders was smiling. She owned it. I asked her about the attack and she shrugged with a smile and just said the attacks didn’t bother her and that she’s praying for the comedian.

That is the kind of woman she is.

Flying into a city to cheap-shot a working mother to her face in front of a room of one thousand journalists because you disagree with her politically is not brave. It’s the definition of a coward and a bully. Putting up with it and forgiving that person afterward?

That is real power.

That is Sarah Sanders.