Kanye West prides himself on being what he claims is a “free thinker.” Earlier this week, the rapper said, “When you hear about slavery for 400 years … for 400 years? That sounds like a choice.” Kanye’s comment wasn’t popular with the African American community. Blair L. M. Kelley, professor of history and African-American studies at North Carolina State University, said she has heard “uninformed people” make similar claims. “I’ve had young men in my courses say ‘they never would have enslaved me,'” she tweeted.

Kanye added, “[T]o make myself clear. Of course I know that slaves did not get shackled and put on a boat by free will. My point is for us to have stayed in that position even though the numbers were on our side means that we were mentally enslaved.”

In Kanye’s follow up comment, he clarified people who were enslaved did not choose their destiny. They were shackled and forced into servitude by others. The history professor believes she needed to give Kanye and America a lesson about the horrors of slavery, “People aren’t aware of the alienation of people ripped from their homes, abused, walked hundreds of miles across Africa, sometimes so far they ceased understanding the language spoken around them.”

God did not free Black slaves. White Americans like my grandfather did.

I believe we are WOKE. I’ve written previously how my great, great grandfather, Robert A. Lower, fought in our nation’s only civil war and that he (and millions like him) should be remembered during Black History month. The Bible tells us the Hebrews were enslaved by pharaoh in ancient Egypt. God delivered them to freedom. Thousands of years later, Africans were enslaved by more powerful White businessmen or Black tribal leaders. Strangely, god did not free Black slaves. White Americans like my grandfather did.

The history professor reminded us about slave castles in Ghana where human beings were held in windowless dungeons, or “slave holes,” before being loaded onto British ships to be sold in the Americas during the 18th century. President Barack Obama compared their situation to Nazi concentration camps in Germany. Professor Kelley should correct the president as well. The Nazi’s rounded up Jews not to enslave them — but to eradicate this group of people. Nazi action was genocide. African slaves were valuable — owners considered them property, as they would a horse or mule.

In a graduate course on economics and African Studies, we discussed the book, Time on the Cross: The Economics of American Negro Slavery, by economists Robert William Fogel and Stanley L. Engerman. Their work challenged the conclusions American slavery was an unprofitable and moribund institution that was inefficient and harsh for the typical slave. To the contrary, the authors suggested slavery prior to the Civil War was economically efficient for most agricultural businesses in the South, which grew crops such as cotton, sugar and coffee.

Plantation owners employed a gang system of labor that was monitored and more efficient than task-based work by smaller groups. The authors pointed out the life expectancy of freedmen declined by ten percent and their illnesses increased by twenty percent following emancipation and the end of the Civil War.

Wikipedia notes the authors recognized their thesis was controversial and emphasized their goal was not to justify slavery. Instead, they hoped to counter myths about the character of Black Americans — perceptions derived from racist attitudes shared by both abolitionists and defenders of slavery that black Americans were lazy, promiscuous, untrustworthy and lacked natural ability.

We can’t be mentally imprisoned for another 400 years.

The history professor missed Kanye’s point. Similar to authors Fogel and Engerman, and people like myself who have shown how Black Americans continue plantation attitudes, the controversial rapper wanted to shatter contemporary racist and victim-mentality myths, “[T]he reason why I brought up the 400 years point is because we can’t be mentally imprisoned for another 400 years. We need free thought now. Even the statement was an example of free thought. It was just an idea. [O]nce again I am being attacked for presenting new ideas.” I’ve criticized the Black community for simply taking a knee to injustice, although high school kids know more effective means to engage in American politics.

The rest of us in society have to deal with these threats to our lives.

A TMZ employee, Van Lathan, who confronted Kanye illustrates why the rapper is correct, “While you are making music and being an artist and living the life that you’ve earned by being a genius, the rest of us in society have to deal with these threats to our lives. We have to deal with the marginalization that’s come from the 400 years of slavery that you said for our people was a choice.”

Mr. Lathan is not a slave. There is no threat to his life. As I’ve shown, Americans are not a racist people. Black Americans protest the tragic shooting of a “great guy” and “decent family man,” Stephon Clark, who was a 22-year-old father of two, yet fail to explain why he was running through neighborhood backyards and breaking into cars. Although Lathan provides few details about his current profession, he’s freely employed and pursuing life, liberty and happiness, as are ALL Americans. Lathan claims he is disappointed, appalled and hurt that his brother Kanye has “morphed into something to me, that’s not real.”

My African American Facebook friend, Wonetah Einfeldt, posted an example of the racist disease of mental slavery that Kanye seeks to end. She compares slavery to the NFL draft, because owners poke and prod star athletes prior to the selection. For the record, I was a professional basketball player — a White man in a Black man’s game. White and Black players are equally poked, measured, tested, groped and assessed. We all feel like a piece of meat. But let me tell you — it’s nice to be Top Choice Filet Mignon. 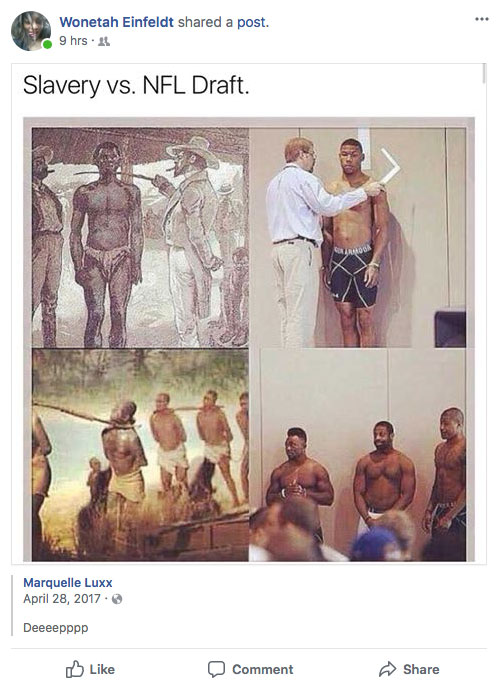 Wonetah needs to take the professor’s course on slavery. There’s simply no comparison of slaves to modern NFL players, who freely choose to play a game for millions of dollars, while being applauded by adoring fans.

In similar fashion, Jemele Hill carries the Victimization Cross for a group of Black female golfers. She holds a privileged position as an American sports journalist with ESPN’s website, The Undefeated. Unfortunately, she uses her platform to divide America over racial issues rather than promoting sport and positive human relations.

Ms. Hill tells a story about a group of golfers — all White men — who accused five Black women golfers of slow play. The incident occurred the previous weekend and management at the Grandview Golf Club in York, Pennsylvania, summoned the police to calm the dispute. All the women are avid golfers, members of the club, and part of a local organization called Sisters On The Fairway. Ms. Hill wants the Black community to add golfing to the list of normal activities Black people dare not do without inciting irrational fear. She claims the incident is just another example of WFW: White Fear Weaponized. That’s not real, Jemele. The five White males were not in FEAR of the women. Management publicly stated why they took the action they did.

“The members did skip holes and took an extended break after the 9th hole. We spoke with them once about pace of play and then spoke with them a second time. During the second conversation, we asked members to leave as per our policy noted on the scorecard, voices escalated, and police were called to ensure an amicable resolution.”

What is real? Although there are ample examples of injustice in America and around the world, it appears many Black activists manufacture controversy to promote their websites and blogs. I pointed out the illusionary claims of racism when Starbucks asked two men to leave who had refused to buy something. We’re in the 21st century. All Americans know companies provide “free WiFi” or bathroom privileges only to paying customers or members of their party. The two Black men arrived dressed like homeless bums, while claiming they were meeting a friend to discuss a real estate deal. Mr. Lathan, that’s not real.

Since the media focuses primarily on negative accounts of race relations in the nation, few Americans have heard the story about Rosalynd, a 25-year-old dancer in D.C. She found herself waiting on three White Boys with very different political views and had no idea what to expect.

On January 23, 2017, the men walked into Busboys and Poets, sporting bright red, “Make America Great Again” hats. To Rosalynd, this was a clear indication the men supported the Republican side of the political spectrum and newly-elected Republican president, Donald Trump. My African American Facebook friend, Keith Clark, posted the story.

Although the men were pleasant customers, who didn’t cause any trouble or raise any ire, Rosalynd fully expected the White Boys to stiff her on the tip. It was a petty and racist thought, but she assumed Jason White and his friends were the type to do it — because they were Trump supporters and pale faces of the Caucasian race. Her assumptions were wrong. Mr. White footed the bill for the group and left the dancing waitress an astonishing $450 tip. She couldn’t believe her eyes. Maybe it was a mistake. She hadn’t given them any special treatment. Then, she read the attached note (below).

Jason White had written, “We may come from different cultures and may disagree on certain issues, but if everyone would share their smile and kindness like your beautiful smile, our country will come together as one people. Not race. Not gender. Just American. God Bless!” Why had he made this amazing gesture?

Jason explained later his motivation for the generous act was the inspiration he felt walking around and visiting all the landmarks in Washington, D.C. Further, being served by a kind young woman who treated them the same as anyone else, had moved him to be kind in return. Kindness is real.

How about the feigned outrage by America’s Black community over a couple White sorority sisters who sang along “Nigga, nigga, nigga …” to a rap, hip hop song? History professor, Blair L. M. Kelley, chided Kanye for denigrating the lives of slaves “for attention and spare change” and called his behavior an embarrassment. Black male rappers defile women with their misogynistic lyrics — for attention and spare change. The female professor doesn’t criticize Black rappers. What’s embarrassing is the hypocrisy and double standards from Black culture in America. Kanye is correct — Black Americans should not imprison themselves mentally for another 400 years. That is real.