Diamond argues geographic, climatic and environmental characteristics favored early development of stable agricultural societies and ultimately led to immunity to diseases endemic in agricultural animals, as well as the development of powerful, organized states capable of dominating others. [emphasis mine]

In Hawai’i, it’s estimated there were over 500,000+ Kanaka Maoli (indigenous Polynesians) in 1700. Due primarily to germs and disease, by 1900 only some 25,000 remained. Ipolani Bovee suggests the Kanaka seem to be enjoying the “germ karma payback.” Of course, nobody is known to be immune or resistant at this time. We may want to work together rather than divide forces. Nature is a beast! 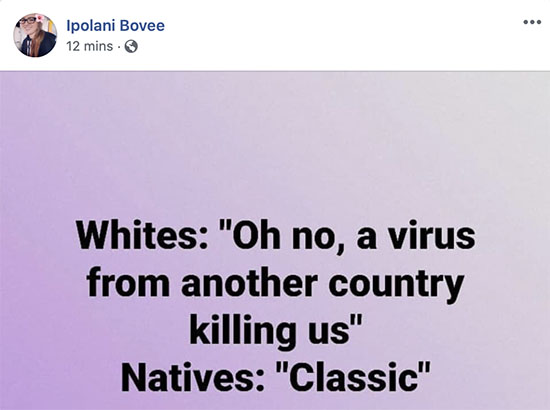 When Europeans arrived in North America carrying germs that thrived in dense, semi-urban populations, the indigenous people were doomed. They had never experienced smallpox, measles or flu. Viruses tore through the continent killing an estimated 90% of Native Americans.

Experts believe there were some 25+ million indigenous people in Mexico in 1520. Fifty years later, the Mexican population had collapsed to less than 3 million. Tens of millions died from infectious diseases that arrived with the Cortes invasion of the continent. 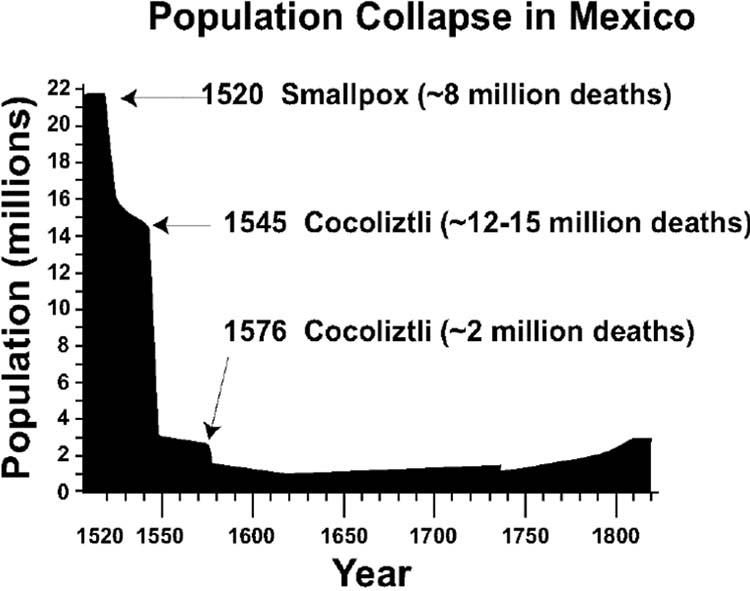 Diseases frequently originate in agricultural animals. In the USA, as much as 80 percent of antibiotics are given to food-producing animals. This keeps them healthy, which in turn yields healthy food. Responsible use of antibiotics in animals leads to an overall decrease in bacteria. Yet are we responsible?

Even in these tense times, Sarah reminds friends and readers how useful bats are to gardens and why we should consider the practice. 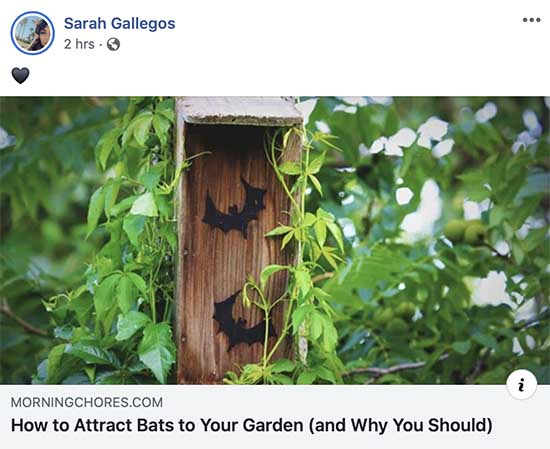 On February 11, 2020, the World Health Organization announced an official name for the disease causing the 2019 novel coronavirus outbreak first identified in Wuhan, China. Labeled as coronavirus disease 2019 and abbreviated COVID-19: ‘CO’ stands for ‘corona,’ ‘VI’ for ‘virus,’ and ‘D’ for disease. This disease was initially called “2019 novel coronavirus” or “2019-nCoV.”

Ashley alerts followers to some differences between COVID-19 and the flu. We have experience with the flu and people have “partial immunities.” There is one death per every 100,000. With coronavirus thus far, there have been 30 deaths recorded per every 100,000. [source] 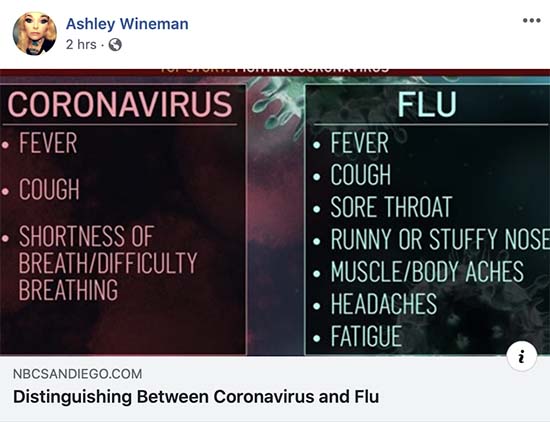 There are numerous human coronaviruses, including some that commonly cause mild upper-respiratory tract illnesses. COVID-19 is a new disease, caused by a novel (or new) coronavirus that has not previously been seen in humans. [source]

COVID-19 respiratory droplets fall to the ground within a few feet, unlike more highly contagious airborne pathogens like measles, which can travel 100 feet through the air. WHO and CDC emphasize “social distancing” to deter COVID-19’s spread, rather than focusing on face masks. Both interventions are needed to stop COVID-19. #MaskUp for your health and the safety of others.

When the first 2019-nCoV sequence became available, researchers placed it on a family tree of known coronaviruses—which are abundant and infect many species—and found the virus most closely related to viruses in bats: 96.2% similar to a bat virus and 79.5% similar to the coronavirus that causes severe acute respiratory syndrome (SARS). [source]

WHO and CDC emphasize “social distancing” to deter COVID-19’s spread, rather than focusing on face masks. Both interventions are needed to stop COVID-19. #MaskUp for your health and the safety of others.

One serious concern of public health experts is the “HIV-like mutation” that allows the coronavirus to attack human cells.

Jennifer Kidd announced to friends the coronavirus “has made its way to the states” and cautions them not “to go batshit crazy over it!”

She put the current risk in perspective:

“Over 16,000 Americans have died from the flu this year. That’s where you should be concerned. You’re more likely to die of the flu than the coronavirus but you don’t see the media talking about the flu.”

“Be rational and wash your hands. A lot! Lol”

Men and beards are likely to become a social concern. The CDC warns us masks don’t fit properly over full beards or long sideburns. Beards also contain many types of germs, bacteria and possibly the coronavirus.

Only Thing We Have To Fear Is Fear Itself

December 7, 1941, was a terrible, horrible and tragic day for Americans. President Franklin Delano Roosevelt (FDR) spoke to the nation by radio. He referred to the Pearl Harbor attack “a date which will live in infamy.”

Most importantly, FDR’s entire presidency focused on calming a panicked people, nation and world that was in ashes due to the Great Depression and global war. From FDR’s First Inaugural Address in 1933:

This is preeminently the time to speak the truth, the whole truth, frankly and boldly. Nor need we shrink from honestly facing conditions in our country today. This great Nation will endure as it has endured, will revive and will prosper. So, first of all, let me assert my firm belief that the only thing we have to fear is fear itself — nameless, unreasoning, unjustified terror which paralyzes needed efforts to convert retreat into advance.

Though some people’s illnesses will be severe, the vast majority of COVID-19 illnesses are expected to be relatively mild, even asymptomatic. A recent report from China examining over 72,000 infected people shows 80% of cases were mild.

Early research suggests coronavirus spreads through respiratory droplets that float through the air when an infected person coughs or sneezes. Droplets can land on you ― making you sick ― or fall on a surface to reside for some time. It’s believed the virus can survive up to nine days at room temperature. [source]

Research also suggests COVID-19 may spread through people’s feces. This is particularly alarming due to the high incidence of homeless in many urban areas.

Disinfectant wipes work well — if used properly. Do not reuse! Hands are the biggest culprit for transferring bacteria to others. Hand sanitizer is not as effective as hand-washing.

Don’t be fooled about face masks. Health experts agree they don’t help — unless you’re already sick. Then they can shield people around you from your coughs and sneezes.

Luanne Anderson hopes to calm some irrational fears. Look at her list. Since 1999, there have been some 19 major outbreaks that might “kill us all.” We’re still standing! 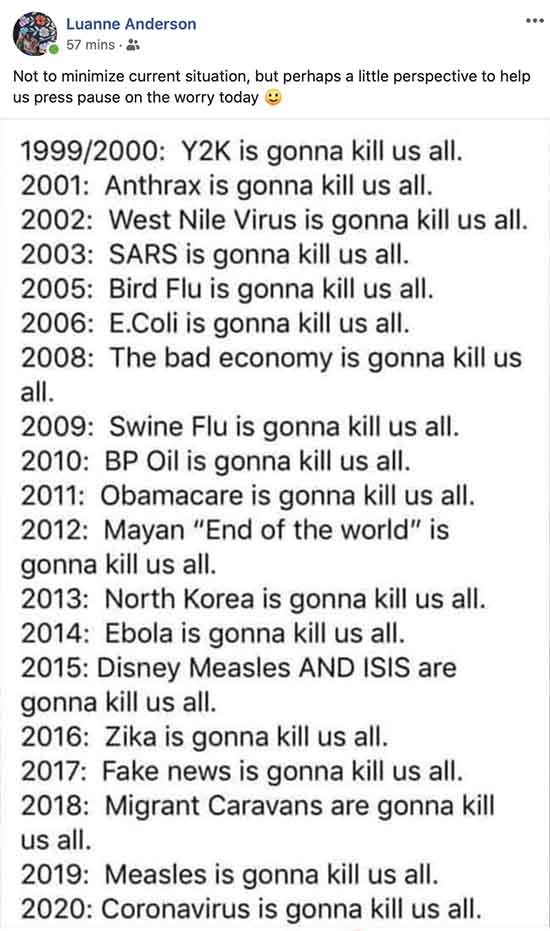 Dr. John Bergman says he’s not afraid. He argues media coverage is extreme and causing a worldwide panic. Bergman believes media created the panic created on purpose. The world is changing rapidly, in his opinion, and this is causing a global depression.

World leaders, Bergman believes, are using coronavirus as a “scape goat to distract the public from disastrous financial times ahead.” Either way he peddles fear. Don’t be afraid of the virus; be afraid of governments around the world. FEAR!!!

Panic causes people to willingly give up their rights and governments will capitalize on those fears.

Interested in protecting yourself, friends and family members? How about a little soap and water?

A Pandemic of Fear: Rational or Not?

What is a pandemic? Do you know how this differs from epidemic? Shall we pray? 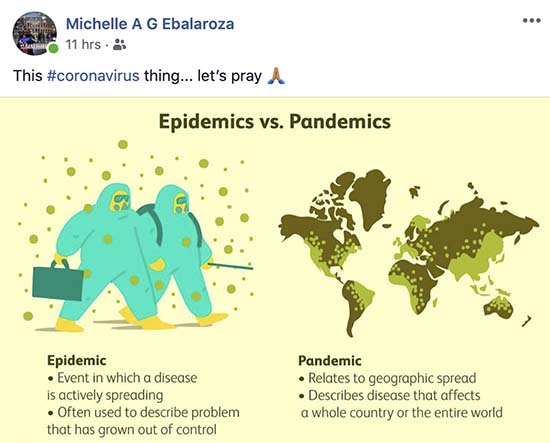 The president has been criticized for claiming the outbreak is under control. David believes “he dismantled and de-funded the government organization put in place for just such a crisis and now we are unprepared.” Do you agree? 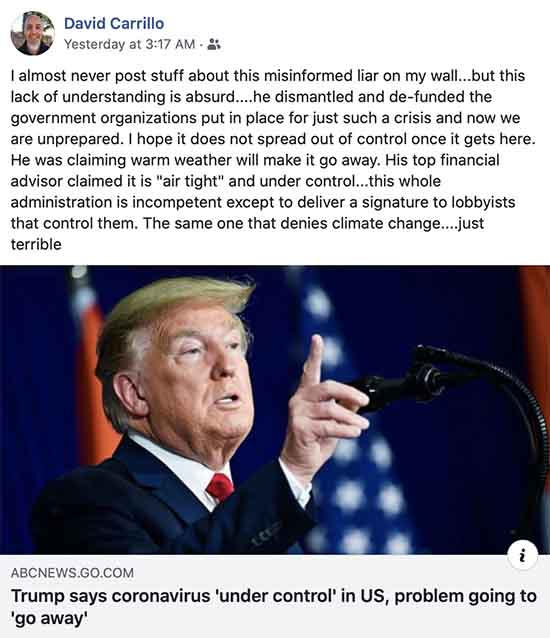 Lucia posted a counter claim suggesting other US officials now admit coronavirus will be a pandemic and force schools and businesses to close. Is this report accurate? 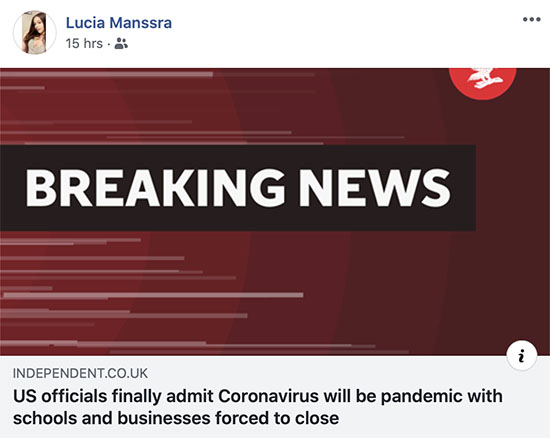 Kelli Ryan represents the views of many citizens who distrust government officials. Due to Japan’s urgent actions, she believes the situation is “MUCH worse than they’re telling us and everyone.” 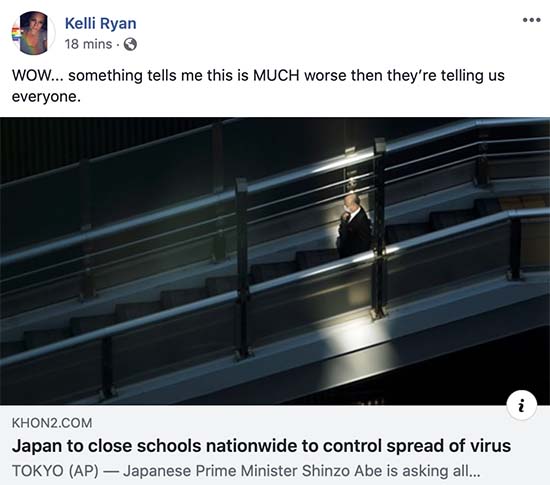 Leaders is the Islamic world are pumping the brakes on social and religious gatherings to slow the contagion. They obviously believe more than prayers to Allah are required at this time.

Recently decorated by the president with the Medal of Freedom, Rush claims Democrats pose a far greater risk to the nation that the virus. He reaches over 10 million a day. 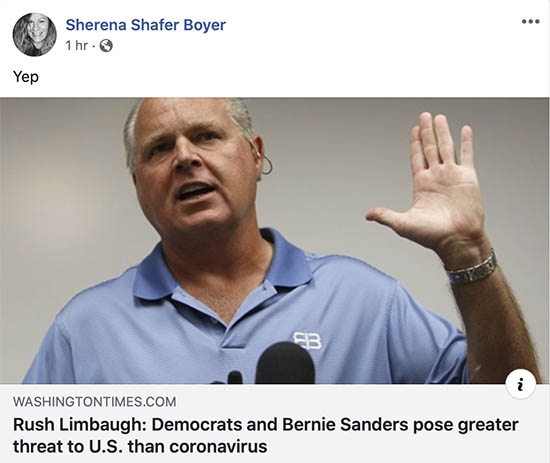 Teri points out how prices are dropping for airline tickets, cruise ship passage, hotels and vacation packages. For those willing to take risk, there are some excellent deals to be found. 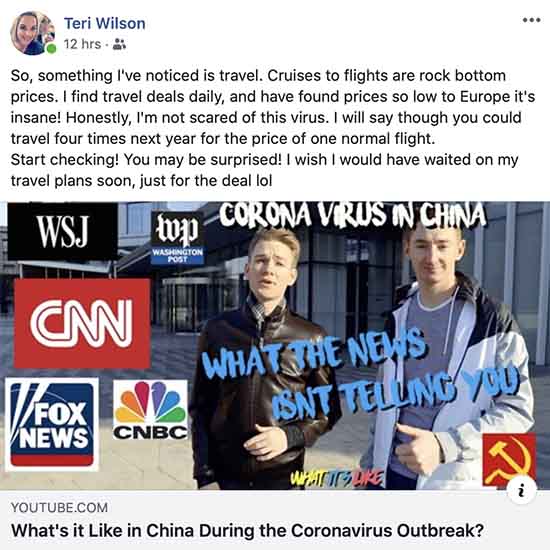 Robert featured a story about a young man who had purchased a “junk” healthcare plan. Thought he was getting a great deal due to the low premiums. Now he must pay thousands for his medical treatment and coronavirus tests. Important to have quality healthcare insurance. One never knows. 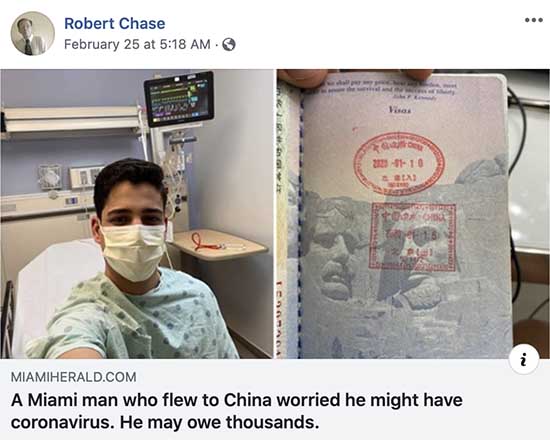 The president appointed Vice President Mike Pence to direct the government’s response. It’s an election year. This gives VP Pence an opportunity to show his leadership skills — hopefully not let us down. The Verge doesn’t appear to be optimistic.

Those on the political Left poke fun at the vice president, as he tends to rely heavily on prayer for solutions. Do the Muslims know something VP Pence does not? 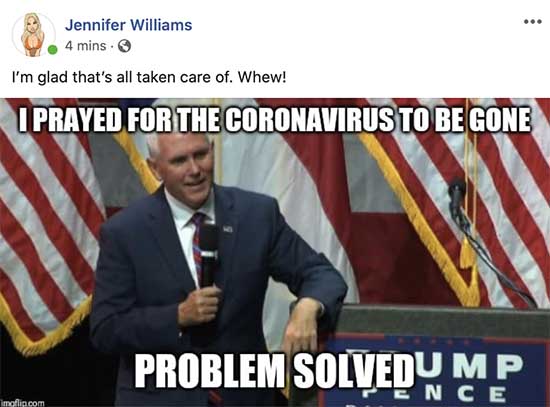 Love this meme from Kimberly Gray. Gina shared the image and pointed out many of us have traveled to “hell and back” to get to where we are today. Some were chained in cargo holds of leaky, tiny ships. Others traversed dangerous wilderness, escaped war zones or brutal dictators.

However you came to this point in 2020, you have a history of victory and success. You are a survivor. Collectively, we are champions. Tall or short, skinny or overweight, regardless the color of your skin, your gender or your national origin, you are awesomely amazing. God challenged you in untold and uncountable ways. You passed every test and jumped every hurdle.

Remember in this time of confusion, fear and irrational behavior that you are a victor. Be the champion you were meant to be. When others are running scared, be the calm in the storm. By helping just one person, you might not change the world, but you most definitely will change the world for that one person.

3 thoughts on “Aloha Friday and Coronavirus: Only Thing To Fear Is Fear Itself”