U.S. incarceration rates are among the highest in the world, although crime is down. Want to know why? I’ve been working to overturn our drug laws for over 20 years. Substance use is a Mental Health issue, not criminal. 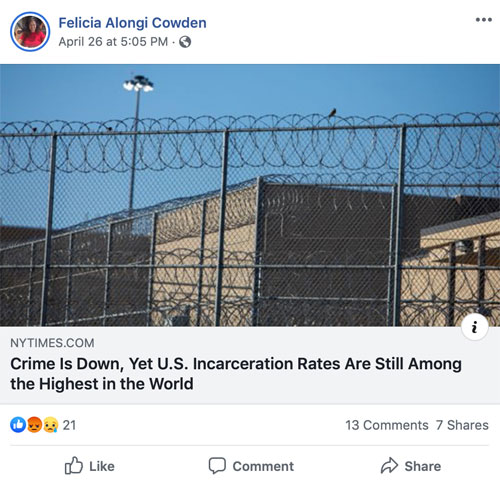 Felicia Alongi Cowden is a first-term County Councilmember on the island of Kaua’i. She is a compassionate and caring legislator. She demonstrates potential for outstanding leadership. I hope this brief summary of our history compels her to act passionately and powerfully. We’ve destroyed the lives of millions of our own citizens and their families in this racist and failed War on Drugs.

Lee Williams: Felicia Alongi Cowden, about 20% of federal prisoners are in for marijuana-related crimes. Another 50% are in for Other Drug offenses. Only about 30% are in for non drug-related crimes. America has the highest incarceration rate in the world higher than China North Korea or Russia. And America calls itself a free country hypocrisy! 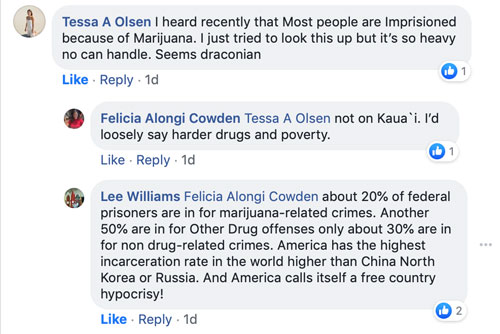 I agree with the figures from Lee Williams: 20% cannabis; 50% other drugs. As a PhD student, I compiled similar research for the State of New Mexico in the 1990s: “Who’s In NM Prisons?” Libertarian Republican Gov. Gary Johnson used this research in part when he called, as the first governor in the nation, for the legalization of cannabis in 2000.

A friend of mine, Darren White, was Johnson’s director of Public Safety. He resigned in protest due to the “irresponsible” leadership of the governor. White serves today on a number of Medical Cannabis dispensaries in Albuquerque.

These are Mental Health issues, not criminal.

Take 70% of prisoners from our prisons and jails and we would not be in this predicament. Illicit drug markets also add guns and violence to our communities.

Those apprehended, arrested and/or convicted cannot gain productive employment and spend much of their life in and out of the criminal justice system. The cost to them is immoral. The cost to society is incalculable.

Overall, the War on Drugs is second only to slavery as the Greatest Sin in our nation’s history.

Overall, the War on Drugs is second only to slavery as the Greatest Sin in our nation’s history. We faced and failed a similar battle in the prohibition of alcohol. We had wars on our streets. As the dominate culture of pale-faced citizens wanted to drink alcohol, the government capitulated. We manage alcohol much differently today.

As the War on Drugs affects minority communities the greatest, the majority continues this unjust criminalization of some of our poorest, most disadvantaged and least protected populations.

This creates massive poverty and despair. It fuels the Private Prison Complex, funnels wasteful tax dollars to law enforcement departments and serves the racist and inhumane agenda of some of America’s most despicable “leaders.”

Harry Anslinger, 1937, coined the term marihuana for cannabis sativa to demonize brown skinned refugees fleeing to America from Mexico. They called it mota.

Thus, Nixon added cannabis sativa to the highest classification in the FDA Controlled Substances Act, Schedule I. This prevented any research into the drug. Officials needed only to say they “smelled” the drug to bash down doors and conduct illegal searches.

Not since the first millennial, referred to the Dark Ages when the Church blocked science, has government instituted and furthered such an insidious intrusion into the constitutional rights of a FREE people.

Sadly, our ignorance and preconceived biases allow this War on People Who Use Substances to continue.

We have failed to remember our history and the cost to taxpayers and millions of American families will never be recovered.