The Civil Beat team blocked my post to Trisha Kehaulani Watson’s article yesterday, “Thinking of Hawaii’s Treasures as Notre Dame Burned.” She advocates to continue humankind’s practice of funding and building monuments to dead relatives and ancestors, while our keiki and families are starving, homeless and lack proper education opportunities. My Brazilian Facebook friend posted this meme today. 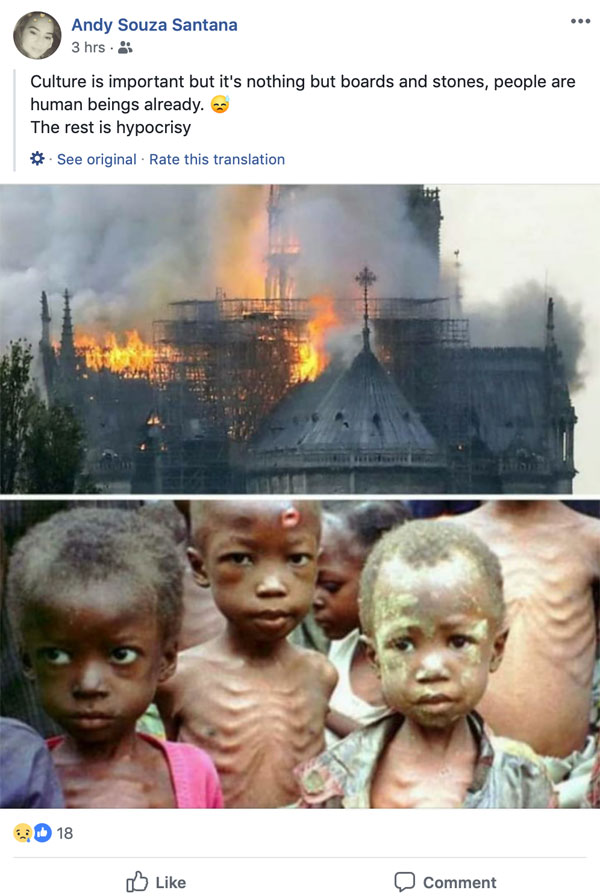 Mob Rule dominates our PC platforms of social media today. WE are not allowed to hold civil, respectful discussions in our allegedly democratic society.

“The further a society drifts from the truth, the more it will hate those that speak it.” ― George Orwell.

As an American, I was taught to revere Thomas Jefferson, for example. Great man! Yes, he was. “All men are created equal,” he said beautifully — although he owned a handful of slaves. Our younger generations point out this hypocrisy. He was a complex and flawed human being — as all of us are. Should we build monuments to this flawed past or work cooperatively to create vessels that propel us into the future?

The Church spends billions to build monuments around the world and Vatican basements are full of gold and precious jewels — while people starve. “Let them eat cake!”

Should we build monuments to this flawed past or work cooperatively to create vessels that propel us into the future?

Jesus built no monuments. He didn’t adorn himself with fine linens, gold ornaments or preach in fancy Mega Churches. He wore simple slippahs, common robes and spoke softly on hillsides. Wealth was shared with ALL those in need.

Early pilgrims who landed on the eastern shores of what would become America accepted the food and assistance from the indigenous people. Then, they robbed them of their land and killed thousands. These were atrocities. Yet indigenous tribes murdered each other as well. None were perfect. All have a dark, flawed history.

Here in the islands, King Kamehameha I, the Great, instructed his fierce and powerful warriors to “unite” inhabitants with force. Those who refused were thrown off cliffs. Kaua’i tribes were the only group not to fall in battle — yet joined the king under pressure and coercion. This was not a unity coalition. People did not decide freely.

Americans cheated Hawaiians in 1893 by forcing Queen Lili’uokalani from her thrown and imprisoning her for nearly a year in a tiny room of the ‘Iolani Palace. Yes, American interests were evil and unjust.

The ‘Iolani Place cost a reported $340,000 to construct. This was a vast fortune at the time. Germs were killing Hawaiians. Would hospitals and medical research facilities better assisted the Hawaiian people and their future? How about schools for the keiki? The Palace, designed by three westerners (Baker, Wall and Isaac Moore), benefited the Most Rich and 1% — as most our monuments do today.

Yet Hawaiians were no match for the superior forces surrounding them in the world. Personally, I believe Hawaiians got the best deal possible in this Clash of Civilization. Japan for example was committing atrocities and genocide throughout the Pacific. Had they been the first group to dominate here, it’s possible no Hawaiians would have survived at all.

Even now the Japanese are a “supremacist” culture. They believe their ways are “better” than others — and prove this often with their many successes. They prefer to marry within their race, similar to many Hawaiians who wish to “preserve the seed.” Hitler also suggested such behavior for “white” culture.

This week, Christian Holy Week, witnessed Notre Dame burn. How come god did not save this “true” church? How come Pele did not save her righteous and pono people? How come the Great Sprit of the native tribes of North America did not save the people? Maybe our gods are complex and flawed as well.

One myth or truth, I know not which, says a simple man was tortured and crucified about 2,000 years ago. He then rose three days later to spread a message of love and everlasting faith. He asked for no monuments or stores of riches.

He said humbly, “Feed the poor, shelter the homeless, and heal the sick.” He asked nothing for himself, while suffering a most horrible death. He did make one final request, “Forgive them, Father, for they know not what they do.”

Of all those in our history who have gone before us, He seems the least complex and most perfect. He gave his life for all of us and our sins. Hopefully, we will hear His message and remember His story. His Light endures, while monuments and riches fade away.