CNN financial analyst Paul R. La Monica reported August 1st that Apple was “inches” away from the $1 trillion valuation mark. A number of American companies, including Amazon, Google, Microsoft, are racing against Apple to hit this financial landmark. 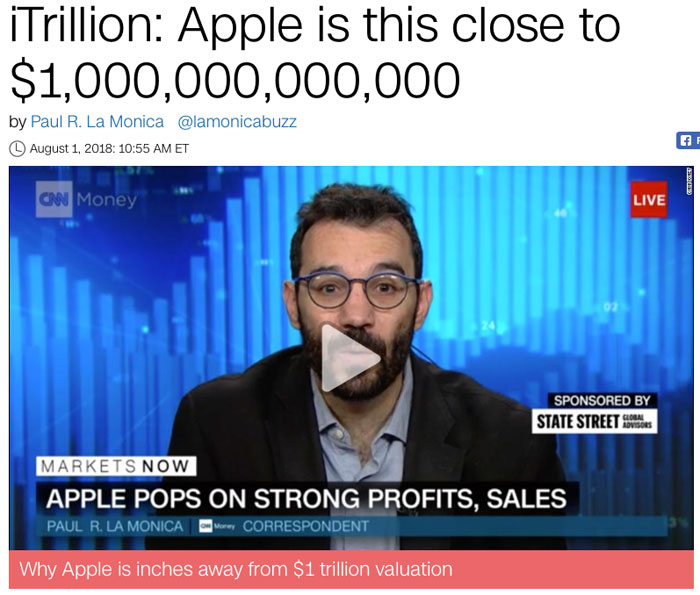 La Monica claimed Apple’s stock price needed to clear $203 per share to hit the historic milestone. Officially, Apple hit the trillion mark after their stock passed $207 earlier today. As of writing, Apple shares are trading about $206.89.

I was directing a research lab at the University of New Mexico in the mid-1990s. We used Apple/Mac computers and technology. Bill Clinton was president and hadn’t yet abused Monica. The economy was taking off.

I recognized the genius of Steve Jobs

A relatively unknown guy named Steve Jobs had returned to Apple. I didn’t know much about company fundamentals, but recognized the genius of Jobs. I bet on the man. Best financial decision of my life.

A cocky CEO in Texas, Michael Dell, claimed Apple was a shitty little computer company. He warned he would shut it down and return the money to shareholders.

I was working with Mac products and saw their massive potential. Apple was doing something special — they were making products “easy-to-use” for the masses. PCs were powerful, but required highly-trained IT staff and coding experts to run most of their devices. These were fine for the one percent of techie geeks. What about the other 99 percent of human beings?

I called my father. We enjoyed talking finance and discussing the stock market. I recommended he buy Apple (AAPL). As I was a grad student and funds were tight for our family, I didn’t buy much. My father was the Big Spender.

My brother-in-law, Marcus Ferguson, was a Dell disciple. He had started a company in Austin, TX, and likely rubbed elbows with Michael. He ridiculed my adoration and respect for Apple. I didn’t listen. I bought as much stock as possible.

Jay Yarow loved the corporate rivalry. He summarized the fight, “Good god, what a message from a CEO! He followed it up by admitting that the stock price was terrible (it was under $10, I think — pretty sure it was under $2 split-adjusted), and that what they were going to do was reissue everyone’s options on the low price, but with a new 3 year vest.” [1] 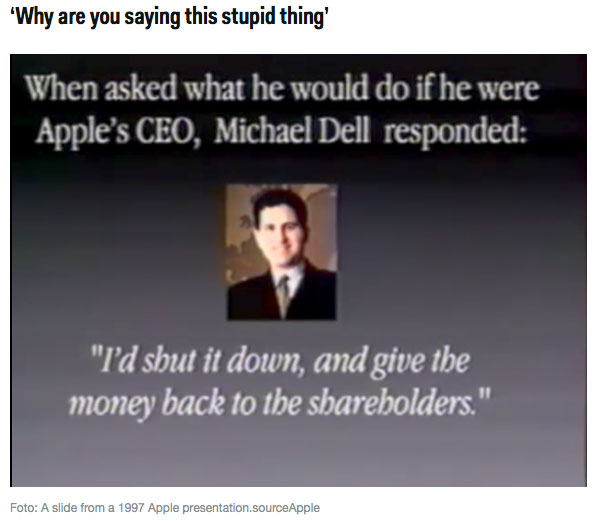 Jobs responded to Dell’s slam by posting his headshot on a slide, calling him rude, and declaring, “We’re coming after you, buddy!” Steve explicitly stated at the time, “If you want to make Apple great again, let’s get going. If not, get the hell out.”

Earlier in 2006, the prospective Apple CEO sent an email to employees after Apple surpassed Dell in market share.

Team, it turned out that Michael Dell wasn’t perfect at predicting the future. Based on today’s stock market close, Apple is worth more than Dell. Stocks go up and down, and things may be different tomorrow, but I thought it was worth a moment of reflection today. — Steve Jobs

Dell spent ten years in a downward spiral to disaster. Nilay Patel wrote, “It’s no secret why Dell’s struggling so badly it just took a $2b loan from Microsoft and bought itself back from shareholders to become a private company: after more than a decade of effort, the company never figured out what consumers actually want beyond low prices, or why they might want it.” [2]

Patel added, “Look back at Dell’s biggest attempts to crack the consumer market and compete with Apple over the past 10 years reveals an embarrassing series of missteps, mistakes, and flat-out bad software.”

Current Apple CEO Tim Cook remembers Michael Dell’s quip that he would shut down Apple. Cook was working with Compaq at the time. He faced a tough decision whether to stay or jump ship to join the Apple team.

“Actually, the people that I respected the most that knew me, some that knew the situation at Apple at least on a cursory basis, 100% said ‘you should not do this. You would be leaving the #1 PC company in the world, that has a great future, and you would be going to a company that’s going out of business,’” — Time Cook [3]

CEO Cook explained how he made the difficult decision, “I did what an engineer does. I made a list of pluses and minuses, I ran a spreadsheet. They both told me I should stay put, but my intuition was saying something different. And I listened to my intuition. That was one of the most important decisions of my life. Maybe the most important.”

Listen to Your Intuition

Listen to your intuition. Maybe that’s the most useful lesson from this amazing American success story.

What do you think? How much Apple stock do you have in your financial portfolio? Please leave your comments below and be sure to FOLLOW ClearHeath Life Strategies. We provide News of the News You Wish You Knew.