Either there is an epidemic of bullying in America or people with video cameras are more effectively capturing hateful behavior.

UPDATE 7.10.18: Yesterday I stated the “latest shameful outburst” was a White woman from Georgia. It’s a new day and another White woman disgraces America!

#SubwaySandra, a White female employee with the Subway store in Newnan, Georgia, called 911 because she believed the family visited the restroom a suspicious number of times. She said she thought the family planned to rob the restaurant. She also allegedly told police the family filled their water cups with soda. Subway placed #SubwaySandra on administrative leave.

The latest shameful outburst involved a White woman from Georgia who has been dubbed #NewportNancy. She called police because she saw a young woman smoking in the parking garage.

“Caucasian woman tells my daughter to put her cigarette out and decides to call the police on my daughter for smoking outside in a parking deck.”

As I’ve pointed out, I’m a victim of this type of female misandry and bullying as well — #MeToo. Although a company maintenance employee gave me permission, the Wellbridge Sports & Wellness assistant general manager and yoga instructor, Michele Lewis, who I initially labeled #NoShowerSuzie, called police on me for allegedly taking too long to shower.

I was an 18-year member with over 4,000 positive visits. The inexperienced manager didn’t extend me the professional courtesy to discuss the matter with with me. Her abusive behavior is similar to the female bully in South Carolina — police arrested her!

Thirty-eight-year-old Stephanie Sebby-Strempel of Summerville, tagged #PoolPatrolPaula, repeatedly screamed at a young man and his friends at a pool, “Get out!” “Get out!” “Get out!” — just what the female Highpoint manager said to me. This yoga instructor has no namaste! I now call her #NoNamasteMichele

This morning, I ran into a woman I had met at the facility years ago. Kim is a public school teacher. “Hey Scott! How you doing? Haven’t seen you in a while. Where’ve you been?” she inquired. I told her Wellbridge Sports & Wellness kicked me out. “WHAT???” she shrieked. “But you’re such a nice, popular guy. Why did they do that?” she asked sadly.

I told her I didn’t know for sure, “They never really explained.” I described how #NoNamasteMichele called police on me for taking too long to shower; how the abusive female screamed at me, scared me, humiliated and embarrassed me. Kim said she was disgusted to hear how management treated me.

I became friends with Kim after rescuing her dog. Chloe apparently kept climbing their fence and they had lost her a couple times. One evening I noticed a cute puppy running in the street. Afraid she might get hit by a car, I stopped.

When I exited my vehicle and called to her, she backed away. I opened the back door. I had a towel and thought I could turn it into a make-shift leash.

Didn’t need it. Chloe jumped in as soon as I opened the door. Hilarious! She wanted to go for a ride. I brought her home for the night. The next morning, I visited our neighborhood vet and she scanned Chloe to see if she was chipped. She was.

I was able to get Chloe back to her owners a couple hours later. Kim and I became good friends.

She’s a fantastic teacher and mother. The bullying yoga teacher, #NoNamasteMichele, ripped us apart. Over bullshit! Over nothing!

Michele Lewis now has bad karma and should go to hell. Michele Lewis needs to resign! Society must stop harassment and intimidation like this. Why are Americans being such assholes?

Recently the U.S.A. has observed a number of instances of Bullying White Women:

Alison Ettel, ridiculed online as #PermitPatty, is the woman who called police on the young girl. Due to social media pressure, she resigned her CEO position. “Why is it always women?” Jaquita asks on Twitter.

Sadly, we witnessed a couple White males join the bully parade last week. Adam Bloom, #IDadam, demanded to see ID from Jasmine Edwards to “prove she was able to use the gate pool” in their community. Justly, Adam is now looking for a new job. 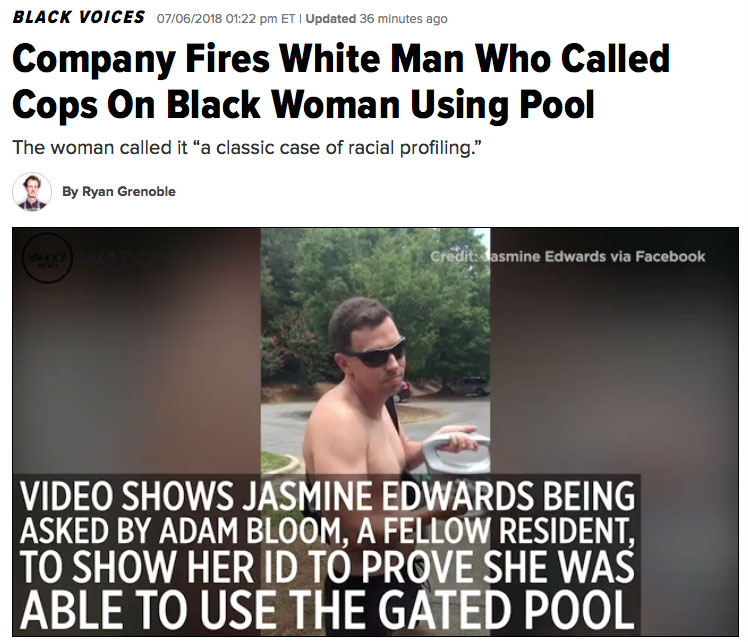 When Edwards asked Bloom for an apology, he walked away. #NoNamasteMichele has never apologized to me! Neither has Highpoint general manager Rich Novelli. Not classy people!

Facebook friend Robert Chase posted a video about a still unnamed White asshole who called police on a number of Black folk for swimming in their own condo pool. He claims they had “too many guests.”

Wakandan War Dog on Twitter asked, “What the hell? If Newport Nancy just minds her own business there’s no issue. Like ma’am … go eat your hummus and pita chips and let that lady smoke her cigarette in peace.” Sound familiar?

People aren’t perfect. All Americans make minor mistakes. Why are White Women so quick to rush to judgment? As a society, we have been working for generations to open doors for females. Is this bullying behavior the result of increased opportunity and power?

Mormons in our small community preached when I was growing up, “Women are at their best when they are pregnant, barefoot and in the kitchen.”

I didn’t agree at the time — maybe they were right. Women, it’s up to you now! Are you going to lead or make us bleed?

What kind of American society do you want? Are we going to be civil and courteous to each other or further bullying and strategies of intimidation? Stand up now or sit down forever!