UPDATE 9.8.2020: For our final day of this feature, Hawai’i suffered TWO new coronavirus-related deaths and 66 new cases. Tomorrow should be the end of this second lockdown. Failure of DOH and Governor FrankenIGE cost all islands billions of dollars and increased frustration for all residents. Working together, we squashed infections last May. Government incompetence allowed too many exceptions to the quarantine rule and kicked off a second wave.

Pacific Island community, Filipinos and “Other Asians” suffered the most. Generally, these communities are poorest, live in congested, crowded congregant housing and are employed in some of the least-protected workplaces. The 4% of Pacific Islanders suffered over 32% of infections (below).

UPDATE 9.7.2020: ONE new coronavirus-related death and 105 new cases. Taxpayers are footing the bill for local hotels to shelter C19 patients who do not have suitable accommodations. Hotels generally supply food or Medical Reserve Corps volunteers will purchase and provide contact-less delivery of food, hygiene items and limited household supplies. This is a good plan, but seems DOH continues to fail oversight and there is great confusion. (story) City’s use of Oahu hotels will cost hundreds of thousands of dollars in federal CARES Act funds each month and is likely to require millions. (story)

Rensiana Thomas was provided a FREE room and isolated at Equus Hotel July 21 to 30. Couldn’t stay home, as her family has only one bathroom to share. Thomas claims her health wasn’t monitored and family and co-workers weren’t contacted by state contact tracers. She was released from isolation after only 10 days and wasn’t retested to ensure she was negative. She is from Chuuk (Micronesia) and wasn’t given an interpreter; food and water weren’t brought to her in a timely fashion; and complains it was uncomfortable sleeping on dirty linens for the whole stay. She said she followed the rules, but no one make sure she complied.

“They never came to see me face to face at the hotel. I followed the rules, but I don’t know if anyone was monitoring me. They gave me a thermometer and other supplies for checking my heart. I just read the paper, but they didn’t call me and explain.”

“I was not OK during quarantine because I was scared and alone. I just keep praying every morning, before lunch and at night. I keep praying that God will protect me.”

Part of the problem is spoiled, privileged residents. Rensiana believes taxpayers OWE her an interpreter. There are two legal languages in Hawai’i. Learn one of these. Food wasn’t delivered in a timely fashion? Lack of water? She has water in her hotel. We usually change our bedding every two weeks. Personally, I wish people we are trying to help would be a bit more grateful and appreciative.

UPDATE 9.6.2020: ONE new coronavirus-related death and 164 new cases. Not always confident about Sunday numbers, but if the lower infection rate holds, this suggests lockdown has been effective. Yet the incompetent governor and DOH forced lockdown, which cost the Aloha state many lives and millions of dollars.

Sunday editorials revealed the level of public dissatisfaction with elected officials. David Shapiro wrote, “Gov. David Ige is unsteady, secretive and increasingly isolated as the challenge overwhelms him” and “all Democrats are untethered to any guiding ethic.” Richard Borreca claims this was a historic collapse in leadership.

Interestingly, the governor’s point man to manage the crisis, Lt. Governor Josh Green, submitted an editorial including a “plan to defeat COVID-19 in Hawaii — and we must deploy it now.” Hasn’t he in charge? Shows both the confusion and incompetence in leadership.

Lee Cataluna, writing from her new home with Civil Beat, titled her scathing review over the governor’s disastrous response, “Scapegoats and Fall Guys for a Leader Who Cannot Lead.”

Inga posts from Nanakuli today. People aren’t listening to the governor any longer. 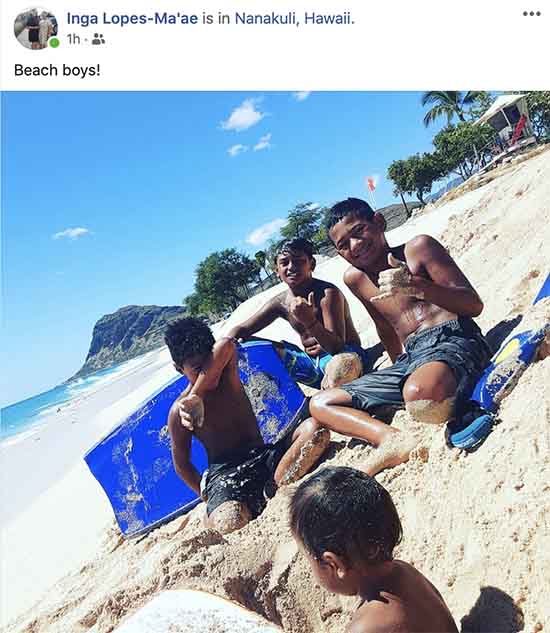 Are we heading toward 3.5 million American deaths? Over 6 million Americans have suffered confirmed C19 infections. Let’s double this as we know many were asymptomatic … 12 million, which is about 4% of the population, and we’re closing in on 200,000 deaths (188,000+).

Without a vaccine, we need 70% of the population, or 230 Million infections, for herd immunity. Doing what we’re doing now, there would be an estimated 3.5 Million Deaths. 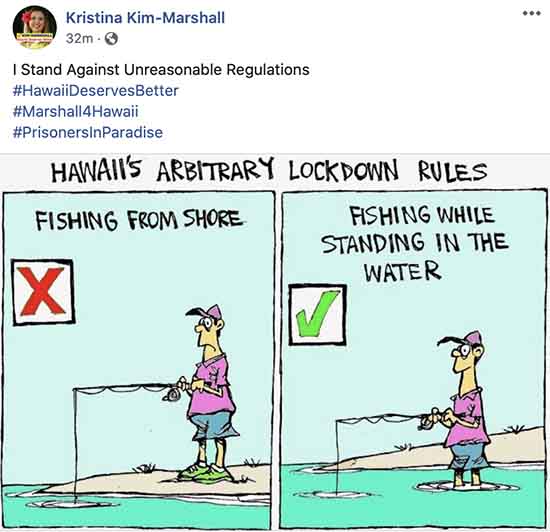 Therefore, identifying each of the 70 positive individuals cost us $14,727 per person [$1,031,600 / 70]. This is why Contact Tracing is so critical. We can target tests rather than have people sitting in mile-long lines burning fuel on H3. See update: Hawai’i DOH Murders Pacific Islanders

UPDATE 9.2.2020: ONE new coronavirus-related death and 339 new cases. More errors discovered. Health officials said 90 of today’s new cases are previously diagnosed cases from between Aug. 20 and Monday “whose reporting was delayed as the result of an error … that has subsequently been corrected.”

A bar on Long Island is taking bets starting today as patrons wager whether NYC or Chicago will suffer more shootings over the Labor Day weekend. From GW Bush to Obama to Trump, none have done anything to stem the violence. Democrats and Republicans have failed The People.

To call attention to the cruel and incompetent officials here in Hawai’i, we’re accepting wagers for the number of deaths Hawai’i will suffer each day through the week and including September 7th. Each day ClearHealthLife will award $20 to the individual who correctly guesses the next day’s death toll. Yesterday, the state set a record number of seven (7) deaths. As a tie breaker, participants will be asked to include the gender and age group for each tragic loss.

On August 10th, I alerted my U.S. Congresswoman Tulsi Gabbard, her father Mike, and numerous local officials and media of an impending disaster in the Aloha state. Dr. Scott Miscovich discovered Hawai’i had become the leading C19 Super Spreader in the USA. Most importantly, Pacific Islanders were at highest risk. I hoped my Samoan American congresswoman would return home to care for our people. (see Hawai’i DOH Murders Pacific Islanders)

“National statistics show that for every one person that tests positive for corona­virus in Hawaii, the number of people that they are spreading to is the highest in the country.”
Dr. Scott Miscovich

Tulsi heard my concerns and responded August 15th: “How many more people need to die before state leaders take necessary action?” I predict she’ll run for governor in two years. She sees the Big Picture and is both wise and compassionate.

Although Hawai’i is dominated by Asian populations, i.e., Japanese, Korans and Chinese, and descend from nations that have fared well during the global pandemic, local officials live in a sheltered Country Club environment. They’re out-of-touch, cruel rather than compassionate, and frequently, a day late and dollar short.

The red box below shows the number of infections and subsequent deaths that could have been prevented during our First Wave of the pandemic had officials reacted quickly and responsibly.

Just weeks after SARS-CoV-19 hit our island back in March, I contacted my good friend, Lt. Governor Josh Green, MD, on March 19th about the exploding rate of infection. We knew the virus was airborne; we suspected many people who were infectious displayed no symptoms or suffered only mild effects. I pleaded with the doctor to #MaskUp the local population. Dr. Jekyll Green didn’t respond to my urgent emails. Many people died.

I protested loudly after Governor FrankenIge and Dr. Jekyll proposed creating a pre-flight testing protocol that allowed arriving passengers to by-pass the 14 day quarantine if they provided a negative test up to 72-hours before arriving. First, too many tests are inaccurate, and second, the average time of incubation appears to be five days or 120 hours. Only Covidiots would authorize such a program.

This is a multistep screening process that includes temperature checks for travelers upon arrival and secondary screening for individuals with symptoms or temperatures of 100.4 degrees Fahrenheit or above. Much of this new program is good, but temperature checks are generally worthless. Too many infected people are asymptomatic.

“I am pleased to launch this digital app which will allow our travelers to provide their required health and travel information before they arrive at the airport. It will also help us keep in contact with those who are required to be in quarantine. This is an important step in preparing to reopen our economy.”
Governor David FrankenIGE

Hawai’i boasts of C19 protocols and regulations, but as any local knows, exceptions to the rule are the rule here. Have a couple friends who arrived a week ago from Virginia. They are sequestered in their rooms in the Ilikai and quarantining responsibly. We unfortunately see too many who have ignored the rule or receive an exemption.

We’re in a monstrous Second Wave of C19 pandemic due to arrivals on our island. Didn’t come from locals. Officials opened the door and people are dying tragically. Didn’t need to happen. The chart below shows there were 133 reported cases yesterday after weeks of triple digit confirmed infections.

If interested, participate in this educational exercise to highlight the incompetence of our officials. Please spread the word and share aloha. We’re a long way from help out here in the middle of the Pacific. Government officials live in fancy mansions overlooking gorgeous vistas and the beautiful ocean. They have no idea the struggle of Ordinary People.

Kokua if can … Mahalo Ke Ahua

3 thoughts on “Place Your Bets: How Many Will Die Today in Hawaii Tulsi?”