UPDATE 7.17.20: Dr. Anthony Fauci today urged state and local government leaders should be “as forceful as possible” in urging the wearing of face masks to prevent the spread of the deadly coronavirus, which the top infectious disease expert says is still in the first wave in the United States and has hit Americans “very severely.” He added the U.S. needs “to get better control” over COVID-19 and masks must be a priority as the country opens up.

“I would urge the leaders — the local, political and other leaders — in states and cities and towns to be as forceful as possible in getting your citizenry to wear masks. Physical distancing is the most important, but practically when you’re living your life and trying to open up the country. You are going to come into contact with people. And for that reason, we know that masks are really important. And we should be using them. Everyone.”
Dr. Anthony Fauci, director, National Institute of Allergy and Infectious Diseases

University of Massachusetts Amherst’s Reich lab shows 45% of counties across the U.S. are currently battling uncontrollable COVID-19 outbreaks, while a newly-revised model from the University of Washington’s Institute for Health Metrics and Evaluation projects the death toll will climb to above 224,000 by November 1st.

The latest forecast predicts the death toll could be reduced by 40,000 if nearly all Americans wore masks in public.

Due to my location in Hawai’i, I follow Asian epidemiologists more than those in eastern U.S. As such, I was the FIRST public health professional to ask the American public to #MaskUp on March 19th. I say this not to brag or boast, but to point out the total failure of U.S. healthcare officials.

One high risk place for C19 infection is public transportation. County requires riders of DaBus on O’ahu to wear face masks. Got on today and two males weren’t wearing theirs. Asked politely for them to #MaskUp. Guy on left said, “Sorry!” and complied. Other dude told me to “fuck off.” I didn’t reply. Just sat down and took his picture. One infectious person can spread C19 throughout a bus.

As we are an intensely political and tribal culture, confusion and delay responding effectively to SARS-CoV-2 has turned the wearing of face masks into another divisive public debate. I find four archetypes of face mask resisters:

We shouldn’t be surprised Americans do not trust public health “experts.” My first assignment was to lead a research group in the fight to take down BigTobacco. Doctors recommended smoking in the 1950s. It was a great way for a woman to retain her “slender figure.”

Top U.S. tobacco company CEOs, dubbed the “seven dwarfs,” testified before the U.S. Congress April 14, 1994. They denied, under oath, the addictive nature of nicotine, despite claims it is more addictive than heroin, cocaine or amphetamines. Several executives also lied under oath falsely stating their companies did not manipulate nicotine levels in cigarettes.

I was also providing criminal justice research focused on the War on Drugs. Although White people and Black folk use cannabis at similar rates, Blacks are FOUR TIMES more likely to end up in prison. The racist “anti-marijuana” campaign still continues after nearly 90 years.

There’s a vaping crisis in Hawai’i and across the nation. Youngsters do not listen to hypocritical adults. I’ve been battling the opioid epidemic since 2010. Counseled individuals and educated groups to encourage them to select safer options.

Yet prestigious Hawaiian Electric fired me for using the alternative pain analgesic, medical cannabis. The Company is considered to be a leader in the islands, but continues Institutional Racist policies.

Although my African American brothers are 3.5 times more likely to die from C19, in my observation, they are also the group least likely to don a face mask. In our complex, men in general are clearly less likely to wear face masks. Women do better than men and Asian females seem to be the most compliant. A neighbor faked being infected the other day.

Two nights ago, returning from the pool area, the elevator opened and a family of four exited. None wore face masks. I don’t know them but have passed by a number of times. We’ve always greeted politely. As they walked by, I said, “Hey guys, how come you not wearing masks?”

I’m not insensitive. As a professional, I know there is tension over the issue. I intended my comment to be friendly. It definitely wasn’t received that way at all. (see It’s OK to Yell at Strangers Who Don’t Wear Masks — but try not to yell.)

“Shut the fuck up, haole boy!” said the father

Shocked at the aggressive hostility, I replied. “It’s not my rule. It’s the law. Just asking everyone to work together.”

“Get the fuck outta here!” said the male loudly

“Just asking you to be safe.”

“I work in healthcare, asshole,” said the dad. “I’m sure I know more about this than you.”

“I work in public health. As you do as well, you understand why they’re asking us to #MaskUp. It’s the law now.”

“Get the fuck outta here or I’m going to kick your ass!” he yelled.

It had been a loud discussion. I was stunned a person who worked in healthcare would disregard mask rules. Now it turned into an argument. “You’re threatening to kick my ass over a face mask?” I answered loudly.

He narrowed the distance between us, and shouted in a menacing tone, “Get the fuck outta here now!” He started dancing, bobbing & weaving with his hands up and fists clenched, as if he was preparing to strike and fight me.

I dropped my small carry bag and locked my hands behind my back in a totally non-threatening position. Didn’t want to turn my back to him; didn’t want to make a movement that would precipitate a fight. Looked him deeply in his eyes, “If you want to fight over a face mask, do what you’re going to do.” I stood there motionless.

He bobbed a bit, feinted a punch, turned around and headed into his room. I picked up my bag and caught the elevator to my floor. 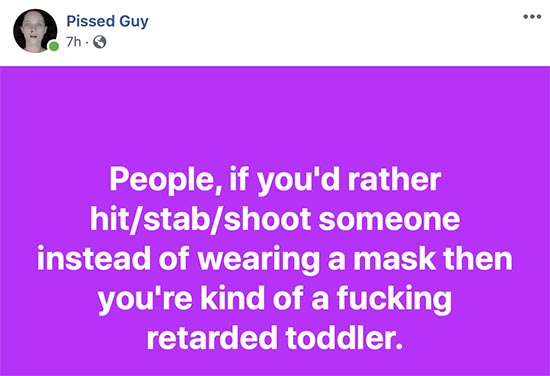 Frustration, anger and hostility over wearing of face masks. How is it possible our elected officials and national “experts” have turned citizen against another when we should be working as a team?

It’s not just Hawai’i. The LA Times reported today, “Californians turn against each other amid 2nd coronavirus shutdown.”

CDC guidelines recommend people do not come within six feet of each other without wearing a mask. They qualify this recommendation to exclude a brief encounter and suggest limiting exposure to less than 15 minutes. Thus, passing by an unmasked person outside on a sidewalk shouldn’t be a huge cause of alarm. Breezes and outdoor air environments can quickly dilute infectious viral pathogens.

On the other hand, indoor areas are different. C19 particles can “float” in the air for many minutes. In my situation, four unmasked people had crowded into a tight, stuffy elevator. If it takes one person around 15 minutes to infect an other, four individuals can spread pathogens more quickly.

The elevator door opened; they exited; and I walked in. Door closed and I’m breathing the same air they shared. They were not masked, and I’m wearing only a simple mask. My mask does not filter out tiny aerosolized and possibly infectious particles.

Is this dangerous? As an expert in probability, the chance of C19 exposure is low. It will always be low until it’s high. That’s how infectious disease works. It’s on or off. People aren’t partially pregnant with C19. If people consistently refuse to wear masks and distance, they eventually get sick or become infected. None of us have natural immunity.

Assume YOU are infected, and assume EVERYONE you meet is infected. How do you behave under the circumstances? Common sense dictates to #StayBack and #MaskUp. Easy peasy!

This is why “experts” now urge ALL residents to #MaskUp around others or in closed areas. Our simple masks do not protect us — they protect those around us. All must wear face masks or shields to protect one another. We must cooperate and work as a team.

The task shouldn’t be hard. Want our kids back in school? Want our economy to be restarted? Want to save lives? Three and only three rules:

All states in the U.S., all nations around the world, understand and accept these standards. Nothing more; nothing less. This is how we defeat C19 and win the Third World War.

An hour later, there was a loud knock at our door. The family had called the police on me. Another COVID Karen.

I admit shortcoming during our encounter. He was loud; I was loud. Arguing wasn’t helpful. Yet he threatened me. Calling a White person “haole” is like using the N-word around a Black individual. His anger was unjustified and racist.

They then called the police after the matter had concluded. Nothing stopped the couple from walking away. Thanks President Trump, CDC officials, Hawai’i Governor Dave Ige, and Honolulu mayor Kirk Caldwell. Your incompetence has turned people against one another.