UPDATE 7.13.20: The Governor and Lt Governor proposed allowing pre-flight C19 testing, which I opposed immediately. The tests are highly unreliable as I documented here. Last Thursday (7.9), Honolulu Mayor Kirk Caldwell expressed doubt about the plan, saying he no longer believed it was “safe for everyone.” U.S. Rep. Tulsi Gabbard, D-Hawaii, and members of the Hawaii County Council also opposed the state’s plan.

Today, Governor Dave FrankenIGE announced the state will delay by at least a month the planned Aug. 1 reopening of Hawaii’s tourism industry with a traveler pre-testing program. It concerns me greatly it took him so long to take the safe action. His plan never had the support of evidenced-based research.

While the mainland continues to struggle in their First Wave of COVID-19 infections, Hawai’i has now entered a distinct Second Wave. Shuttering airports and locking down local residents effectively squashed the virus around the end of May.

Government officials failed to slow the continued flow of off-island visitors. They winked while most arrivals skipped out on mandatory 14-day self-quarantine. We’ve observed many new arrivals violating this requirement. Kind of like asking people to voluntarily not engage in crime or voluntarily not drink and drive. Foolish Covidiots! By June 15th, infectious and deadly pathogens re-emerged. Round Two, here we go! 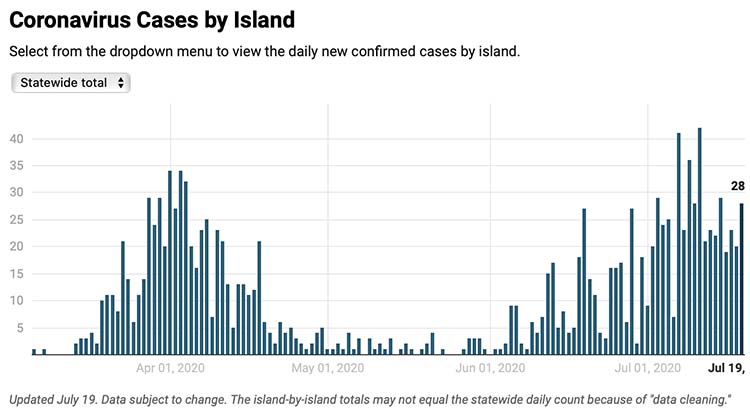 “This is the perfect opportunity for all of us to take a Neighbor Island trip and visit someplace without the tens of thousands of visitors from around the world here with us.”
Lt. Governor Dr. Jekyll Green

It’s critical to remember many who are C19 infectious are asymptomatic. They don’t know; you don’t know. As a general rule of thumb, for every known positive C19 carrier, there are up to ten (10) infectious people who go untested. Today’s record 42 known cases therefore suggest 420 islanders are walking around and possibly infecting others.

This weekend, O’ahu hosts block parties in Chinatown and the Kalakaua Death March in Waikiki. “Get out and spend money,” recommends the Dangerous Due of Democrat politicians. “Don’t be alarmed.” Promise you they won’t be there. They’re Covidiots; not stupid.

“People should not be alarmed. This is the nature of living with COVID-19 until we see major progress on a treatment or vaccine.”
Lt. Governor Dr. Jekyll Green

President Trump has avoided being seen masked in public since the pandemic exploded. Although I recommended our nation move to a #MaskUp policy March 19th, the president just today displayed his first mask in public — June 11th. Took him four months to accept the seriousness of SARS-CoV-2. It’s not going away easily, silly rabbit. His arrogance and insecurity has led to many deaths, chaos and national confusion.

In 2009 the Obama administration managed the H1N1 Swine Flu pandemic relatively effectively. USA wasn’t hit hard, although much of the world suffered. The outbreak lasted about 19 months, from January 2009 to August 2010, and was the second of two pandemics involving H1N1 influenza virus. We see how deaths distributed in two distinct waves. 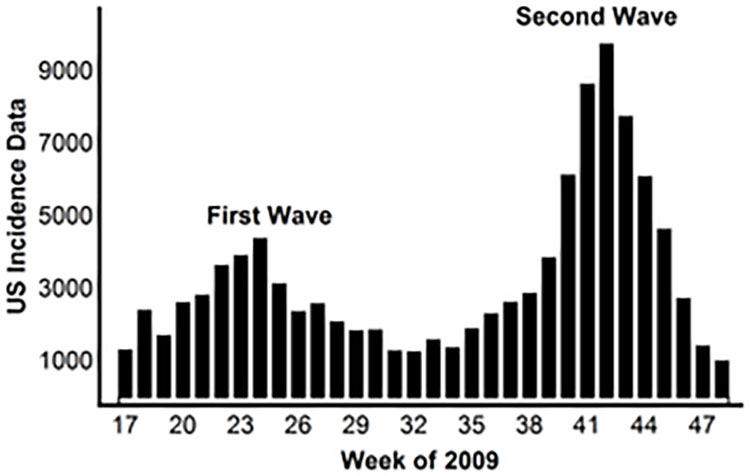 The CDC guided the development of a monovalent (H1N1)pdm09 vaccine, but it wasn’t available in large quantities until late November — after peak of illnesses during the second wave had come and gone in the U.S.

The more serious outbreak occurred between 1918 and 1920. Referred to as the Spanish Flu pandemic, we see two distinct waves. This was the most severe pandemic in recent history. Also caused by an H1N1 virus with genes of avian origin. The second was five (5) times as severe as the first. 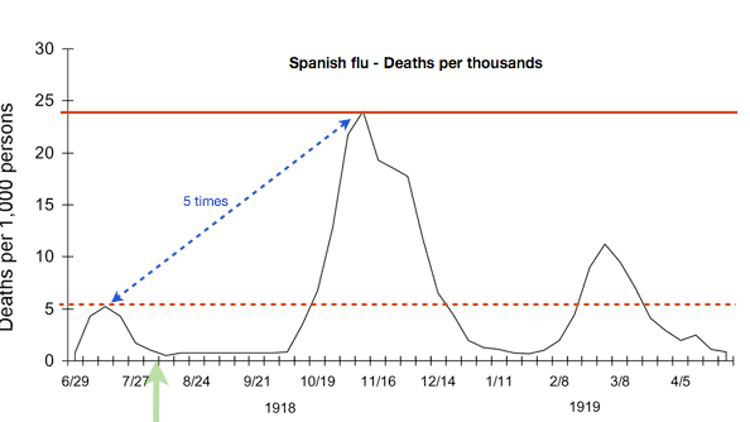 Depends on your point of view. To accomplish this, government had to close airports and local business, while shutting down arrivals of some 30,000+ visitors daily. This left some 250,000 local residents without work. Schools had to close. Families were required to shelter at home. Various community aloha groups had to provide food and meals to hungry and desperate families.

I repeatedly pleaded with Dr. Jekyll Green to #MaskUp the population. Had he reacted more quickly, such draconian measures may not have been necessary. The illustration below shows additional infections (red box) that occurred due to government’s late call to #MaskUp residents. Death and suffering on their hands.

Many people compare Hawai’i to mainland USA. Listen friends, the USA is not successfully leading the world. Taiwan, China, New Zealand, S Korea, Japan, Germany have all done far better than have Americans. Their economies and communities are open and thriving. We’re stuck in a quagmire.

Today, Hawai’i set a new record of infections. July 7 was previously the state’s highest count with 41 new cases. What about scheduled school starts coming up August 4th? As infections are heading north again exponentially, officials cannot more forward to open schools. This further frustrates parents. They have no idea what to do or  how to plan.

A concerned mother wrote, as I noted yesterday:

I’ve been a wreck thinking about what to do…..Especially with a new baby in September. It’s terrifying…working is bad enough dealing with adults who can’t even do the right thing….i can’t imagine kids being expected to….Especially when some of them have parents who don’t give a shit….
Jody Peterson

The State of Hawai’i is now multiple-billions in debt. The legislature so distrusted the governor and his team they locked up some $1.2 billion in emergency federal COVID19 assistance. This could have been used months ago to retrofit schools to allow students to return safely. They instead did nothing.

Day Late and a Dollar Short

The problem is government and business officials have no idea what to do. They are in gridlock and spinning their wheels. Of course this is a challenging puzzle. Few Americans have much experience with infectious pandemics. This is painfully and deadly obvious to all of us now.

On the other hand, Asian nations moved forward. We’re on their doorstep. Could have learned from them. Apparently local officials are too arrogant to ask for help. They shelter in their oligopolistic Country Club of privilege and entitlement, and nothing is ready for the fall semester.

In planning sessions, people are trained to Prepare For the Worst and Hope For the Best. What’s the worst? Total lockdown. Second worst — not being able to get our keiki into a learning environment. Everything is chaos until we return our children and students to their lives — however abnormal that may be.

For months, I’ve recommended schools pause their plan to fully return students on campus until January 2021. There’s simply too much uncertainly. Make the tough call now. Plan for online home schooling with the possibility of students rotating into schools one or two days per week, for example.

This would allow teachers and students some face-to-face time to strengthen learning opportunities, while giving parents time to restructure their lives. This is a worse case New Normal scenario.

If C19 conditions improve, students and families could easily fall back to their previous normal. This is the only way to act, since we are less than three weeks away from the scheduled kickoff of the semester. Starting up, faltering with many infections, and shifting mid-semester to home schooling would totally disrupt the learning process. Government officials focus on profits, not the education process. Stability is critical.

Please watch this Facebook video of Chinese students returning to school. Pay attention to their attention to detail, comprehensive planning, and collective cooperation by parents, teachers, staff and students. This is the Third World War — Americans are not working together. We do not act with bravery. Leadership at the top nationally and locally is in chaos. They’re confused and citizens are left to fight among ourselves.