My third comment today focuses on the Political Left’s desire to see our economy falter — so they can return to power. Rather than win voters with better ideas, they want to lead a nation in ruin. Very dangerous. Here’s the lead on liberal HuffPost this morning (6.8.19). It’s not a true statement and most people do not read the article. They walk around all day believing our nation is failing. It’s not, as I show below.

I was trained by Coach John Wooden. Most national championships in history. He had only a few rules — one was NEVER criticize a teammate. That was his job. We criticize each other — our teammates each and every day. How do we expect to win?

We must stop Us vs. Them behavior. We are an American team. We battle the Chinese, Russians, Japan, Germany, etc. Most importantly, we battle nature. Nature beats all of us. 100% of us will die. Right now, Mother Nature is kicking our ass.

Learn from Coach — the Wizard of Westwood. Stop this petty bickering and work together as a team.

Let’s look at the reality of our economic success as highlighted by CNN Business. 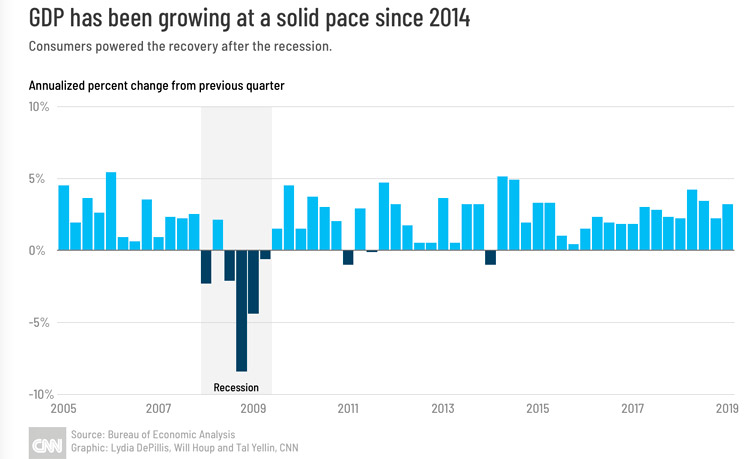 [1] Pelosi Call to Jail Trump: ‘Stuff we used to see in Pakistan’

Pelosi’s leads the constitutional “judicial arm” that holds any president accountable to The People, as Speaker of the House of Representatives. Impeachment is our prescribed means to indict a sitting president.

“Now the Speaker of the House is saying [Trump] ought to be in prison,” Matthews said. “Imagine that you live in some rinky-dink country out in the world that has always looked up to ours. You know, some fourth-world country, doesn’t even have democracy. And here we have the leader of the opposition, saying the other guy ought to be in prison. This is the stuff we used to see in Pakistan in the old days. Defeat the guy, then hang him,” as quoted by Fox News.

“Have to tell you, as a liberal Democrat, I’m appalled at Nancy Pelosi. The idea of her weaponizing the criminal justice system — and calling for the imprisonment of the president of the United States without him being charged with any crime, without him being charged with any impeachable offense — it’s just outrageous,” Harvard law professor and attorney Alan Dershowitz explained on The Ingraham Angle.

Joe FlipFloped today regarding the Hyde Amendment. Earlier in week, Flubby Joe seemed to say he now opposed Hyde — the federal restriction to provide taxpayer dollars to fund abortion. He quickly corrected the record saying he misunderstood the question.

Today, he reverses course, a FlipFlop — as SmellyHair Granddad Joe feels the heat from women on the Left. Joe now claims that due to “extremist” action on the part of the conservative Right, which is a movement to protect the developing life of the child in the womb, he will now oppose Hyde — apparently he is willing to channel tax dollars to murdering developing human life.

Total number of abortions to date since 1970 — in USA alone: 46 MILLION

Feminist named Cayo wrote in a now-viral Twitter post. “Told Biden we need someone stronger on reproductive justice, and after his reversal on the Hyde Amendment, we asked him to protect assault survivors. He said, ‘Nobody has spoken about it, done more, or changed more than I have.’ I told him we deserve better.”

In a later post, Cayo added: “A clarifying point: This was absolutely and undeniably an intimidation tactic. He leaned forward, raised his voice, tried to grab my arm with his free hand. For a hot sec I thought he was going to hit me. Don’t make excuses for his actions in my comments anymore pls & thank.”

Abortion is a complex issue. But there are 46 million good reasons to have an adult conversation about this dangerous and inhumane procedure.

Latest jobs report from the BLS showed the economy added only 75,000 new positions in May. The economy needs to add around 150,000 to keep up with labor growth. This is lower than we hope — maybe a hiccup or possibly a warning sign.

Unemployment remained unchanged at the historical low of 3.6% (50-year low), which is a good sign. Weekly jobless claims remains low and stable — another good sign. And economy continued to reward workers with the 10th straight month of year-over-year wage growth in excess of 3%. This is a highly positive sign.

Democrats appear to be applauding the weakness in job creation. Leaders and the political Left clearly hope the president’s policies FAIL — knowing the misery such an outcome would inflict on their own members and families. The Left has lost its mind! I’m a (former) lifelong Democrat. Voted for Trump last election.

In truth they are horribly insecure. They recognize they do not have any sound ideas for America — thus, they must destroy the entire nation so they regain power.

Here’s a leading example — related to their last leader: Hillary Clinton. Fifteen states have now changed their process for assigning electoral votes. They claim Hillary should be president since she won the national popular vote. (BTW: Hillary didn’t say anything when Gore bested GW in popular vote total Election 2000.

Hillary wasn’t cheated. There are a dozens ways she beat herself. First, and foremost, youth of America fell in love with Bernie, #FeelTheBern. Why not simply add him to her ticket as VP?

As an inspiring athlete in the NBA years ago, I learned teams have a formula. They needed solid Veterans to provide leadership, new rookies to provide energy. Hillary would have been the leader; Bernie would have provided the energy. How hard was that to figure out politically?

Hillary chose Tim Kaine. Who is he? Total milk toast guy!!! Deflated the Left. Had she selected Bernie, Democrats would have defeated Trump 60-40.

Democrats are killing themselves — and doing their best now to KILL the rest of us — due to their own failure.