Today is World Refugee Day. U.K. newspaper, The Guardian, published a 64-page special in their daily edition listing the names of 34,361 known refugees who died in the past 25 years attempting to flee their home country and immigrate to Europe.

“It exposes a terrifying truth of mounting human misery, of utterly preventable death stretching back more than 25 years — and of a failure of imagination by the world’s biggest bloc of liberal democracies.”

The Guardian blames liberal democracies. We need to remember people are fleeing “shithole” countries for these “failed” nations. Culture matters, as I pointed out previously. Our decades of flawed immigration policy have drained the brains of the best and brightest in many developing nations. President Obama spoke eloquently: 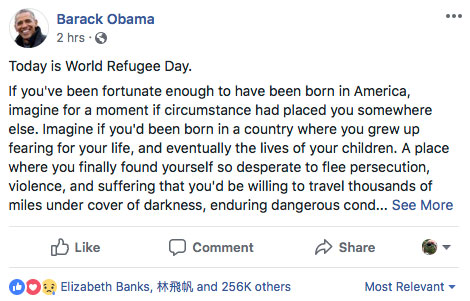 “If you’ve been fortunate enough to have been born in America, imagine for a moment if circumstance had placed you somewhere else. Imagine if you’d been born in a country where you grew up fearing for your life, and eventually the lives of your children. A place where you finally found yourself so desperate to flee persecution, violence, and suffering that you’d be willing to travel thousands of miles under cover of darkness, enduring dangerous conditions, propelled forward by that very human impulse to create for our kids a better life.”

Immigration In A Dangerous World

The year was 1986 when President Ronald Reagan signed a sweeping immigration reform bill. The legislation was pitched as a crackdown — tighter security at the southern border and employers would face strict penalties for hiring undocumented workers. The law also granted amnesty to some three million illegal immigrants.

Most experts rate the action unsuccessful, as strict sanctions on employers were dropped prior to passage. Amnesty with no teeth left a bad taste in our mouth. As a result, anti-immigration backlash has been growing within the GOP for decades, beginning in the 1990s when California became ground zero for nativist forces who warned of the threat that undocumented immigrants posed to the republic. I wrote how we are on the verge of civil war over this issue.

Facebook friend, Pricilla Covarrubias, wonders why liberals didn’t care about kids detained at the border under President Obama’s watch. I asked that question in an earlier blog post. 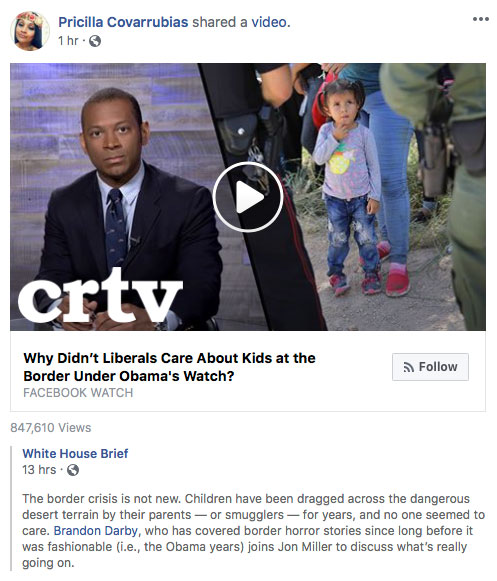 Although millions of immigrants have illegally crossed our porous border in 30 years, no reform legislation has passed the U.S. Congress since the administration of Reagan. We’ve lied to ourselves for over 30 years. Now, both political parties use the migrating families and children as pawns. Facebook friend, Keith Clark, opined why Democrats have jumped on this train.

Americans now do what we do best … BLAME. President Trump blames Democrats. Democrats blame Republicans. The public blames politicians. Ms. Covarrubias believes blame can be traced to President Clinton in 1997. 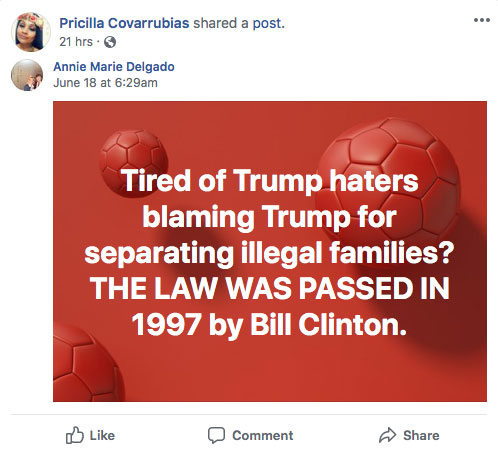 Listen to me — stop the Blame Game. Look in the mirror — we’re all guilty. Shame on us! How are you responsible? You love the lower prices on farm products — picked by illegal immigrants and undocumented workers in a modern system of slavery. Restaurants, construction, landscaping … you name it. If it’s hard work, Brown immigrants — legal and illegal — are doing the work. Pricilla highlights the reality of life for people who live in shadows. 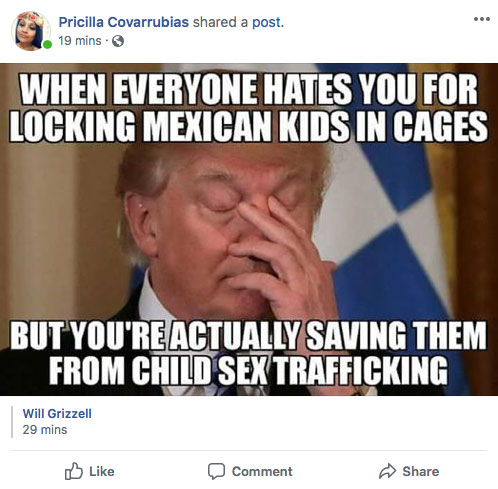 Liberal HuffPost uses heart-breaking propaganda to further their political agenda. They offer no solution to the illegal entry challenge.

Facebook friend, Lori Craven Cano, posted an Occupy Democrats meme that claims President Trump is “torturing kids.” This is extreme hyperbole. No American politician — right or left — advocates torturing children. Most of these families are escaping dangerous and tortuous conditions.

The 1,000 mile journey many families endure would be tangled. Spending a few weeks in an air-conditioned detention center with warm meals, hot showers and a safe place to rest one’s head would be a blessing. Manny Fernandez posted a picture of a toddler who is about 12 months old (below). Although separated from her family, her conditions are humane, safe and compassionate.

American Teens Are Lazy and Privileged

Americans refuse to even pick our own food. In the summer of 1978, 60 percent of teens were working or looking for work. In summer 2016, only 35 percent sought employment. Facebook friend, Michael Jackson, posted a meme from Brian Tyler Cohen. Although U.S. teen unemployment remains high, American families do not ask their children to work farms. We instead seek struggling, hungry, desperate human beings to do the work we do not want to do. This is the definition of Privilege. 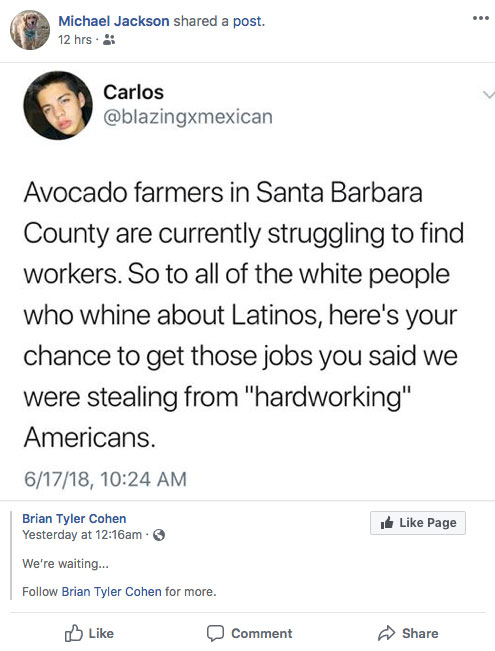 Democrats want another amnesty-type bill. Republicans want to seal the border. Some want political votes; others want below-market labor to increase profits. Politicians and voters alike have gridlocked. Trump advisor Stephen Miller, an architect of the President’s policies, wrote, “You have one party that’s in favor of open borders, and you have one party that wants to secure the border. And all day long the American people are going to side with the party that wants to secure the border. And not by a little bit.”

So basically the only option you’re left with is to open the border and let everyone come, which is something that isn’t sustainable.

Arnold Schwarzenegger posted to Twitter yesterday, “As an immigrant, I know the magnetic power of America’s greatness. As a former border Governor, I know the importance of securing our border and fixing our absurdly broken immigration system. As an American, I know that kids shouldn’t be pawns while the adults figure it out.”

The former California governor added, “The administration is right that we need to fix our immigration system. But if anybody is going to be in a cage while we wait for a comprehensive reform, let’s make it the politicians who don’t do their jobs in the cages, not innocent kids.”

Manuel Arizala shared a post for the Sanders Institute of California pointing out how the senator criticized President Obama for separating immigrant children from their families in April 2016. Manuel asked, “Is it ok when Democrats do it?” Important question. Is it?

White House Brief points out the border crisis is not new. Children have been dragged across the dangerous desert terrain by their parents — or smugglers — for years, and no one seemed to care. Brandon Darby, who has covered border horror stories since long before it was fashionable (i.e., the Obama years) joins Jon Miller to discuss what’s really going on.

Brandon Darby, who is a former Leftist political actor [see video at 4:10] said:

“So we’re kind of in this spot where you have millions of people on the border region and their voices aren’t heard simply because both political parties in the United States don’t benefit from talking about the reality.”

“You have to remember that during the Bush years we used to keep family units together — who were apprehended at the border. We had family detention centers.

And the Left protested and protested, and they demanded that those family detention centers get shut down. And ultimately those family detention centers did get shut down. Now we have the Left saying you can’t separate them and detain people separately. So on one hand  you can’t keep family units together who cross the border; on the other hand, you not allowed to detain them if they’re separated.

So basically the only option you’re left with is to open the border and let everyone come, which is something that isn’t sustainable.”

The short answer is yes — Americans are cruel. We don’t want to do the hard work, so we wink, wink as poor, desperate people flood across our border illegally to do it for us. This is a savage policy. Facebook friend, Jeffrey Palagi, shared a video from Pastor Greg Locke. He thanked the pastor for defending his stance on this issue because of his faith.

“Break the law, suffer the consequences. Break the law, suffer the consequences. That’s not unjust. And that is biblical And that is civil. And that is the way the world works. You want to talk about flat out hypocrisy. Let me tell you something. They don’t care about separating children from their parents. Look at Planned Parenthood. They’ve separated more children from their parents than anybody in the history of the world. Bunch of butchers. You all aren’t worried about parents and children being separated. You all just want to whine and cry on CNN. That’s all you want.”

Facebook friend, Cindi Zirk Okeefe, points out the reality of illegal immigration. These desperate people exist in the shadows of American society. They suffer horrible abuse. We are all guilty!

“And you guys really need to quit lying — making people think we’re carrying these kids off to concentration camps, beating them, starving them to death. Are you kidding? Have you seen the facilities? And it’s only temporary. It’s only temporary until they can get back reunited with their family. But they are really taking good care of them. Quit believing all the Fake News nonsense in the media.

If you believe everything you hear and see on Facebook, and CNN, and liberal news outlets, you ought to sue your brain for non-support. These people are telling you what they want you to believe.

“God has walls all around his city, and there’s only a select group of people getting in.”

And, then people are like, ‘You’re a pastor, what would god think about building walls.’ I’ll tell you what Revelations says, that god has walls all around his city, and there’s only a select group of people getting in. How’s that for biblical wall building?”

What is your opinion on this heart-wrenching issue? Please leave your comments below and be sure to FOLLOW ClearHeath Life Strategies for these final days. We provide News of the News You Wish You Knew.