Today is a landmark day in American politics, as students #MarchForTheirLives. In the aftermath of the February 14th mass shooting at Marjory Stoneman Douglas high school, Parkland, Florida students raised more than $5.4 million for this event, including $2 million donated by Hollywood personalities like George and Amal Clooney, Oprah Winfrey, Steven Spielberg and Jeffrey Katzenberg. I pointed out previously whether one lives in a rural or urban area significantly influences their position on gun control. I’ll examine key forces and traditional Left and Right positions in this national debate.

Historically, many revolutions began with student movements. People likely remember the role students played in the Iranian revolution during the late 1970s. My Facebook friend, Taffy Das, shared a meme from Bill Murray recalling the impact students had bringing the Vietnam War to a close.

Debate over gun control and gun violence has been ongoing for decades. Clearly, students have taken charge and injected new life and energy into the liberal movement. New leaders are emerging. Parkland shooting survivor, David Hogg, is a leading voice on the political Left.

“When your old-ass parent is like, ‘I don’t know how to send an iMessage,’ and you’re just like, ‘Give me the fucking phone and let me handle it.’ Sadly, that’s what we have to do with our government; our parents don’t know how to use a fucking democracy, so we have to.”

“It just makes me think what sick fuckers out there want to continue to sell more guns, murder more children, and honestly just get reelected. What type of shitty person does that? They could have blood from children splattered all over their faces and they wouldn’t take action, because they all still see these dollar signs.”

Traditional Leaders on the Liberal Left

Bernie Sanders says: Congratulations to everyone who is participating in the #MarchForOurLives today. Congress must have the guts to listen to the vast majority of the American people and not just the NRA.

Senator Sanders also points out somehow or another — maybe because of the response of the students or maybe because the American people finally had enough — in a sense the Parkland shooting was the straw that broke the camel’s back and caused people to look around all of a sudden and say, “We have got to do something.”

Florida Senator Bill Nelson says: Since Columbine, more than 187,000 students have been exposed to gun violence at school. When are we going to say enough is enough? 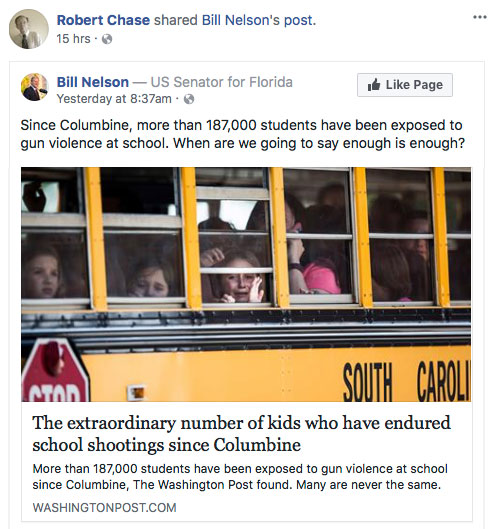 U.S. Department of Education data shows in fall 2017 about 50.7 million students enrolled in public elementary and secondary schools, along with an additional 5.2 million students in private elementary and secondary schools. Of an estimated 56 million students, Senator Nelson claims 187,000 students have witnessed gun violence in school. This means less than half of one percent (0.33%) of students have been exposed to a mass shooting in an American school. These are horrific incidents, but highly unlikely to occur to any one student. The 24/7 mass media coverage blows these events out of proportion.

Taffy stands up to the NRA for demeaning student activists: “Way to go NRA spreading fake news,” she says. 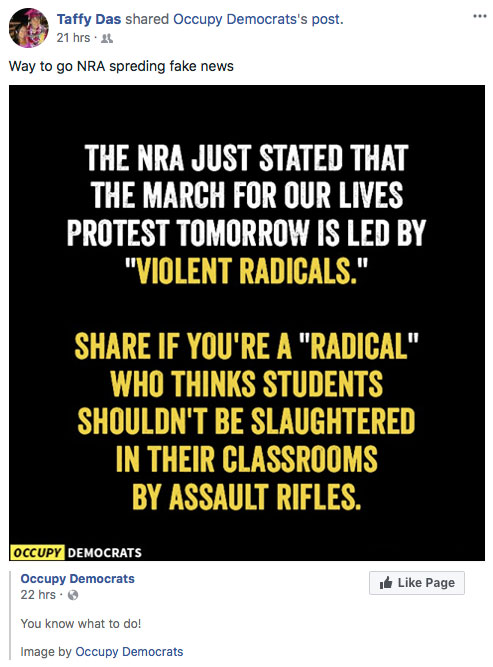 Actor George Clooney, who donated money to the #MarchForYourLives movement, expresses admiration for the young activists.

My Facebook friend, Rick Cutright, who lives in rural Idaho, shared this post from Rosie O’Donnell. In her opinion, if one “owns a gun,” they should go to prison.

Traditional Positions from the Conservative Right

The Hill featured commentary by Texas Attorney General, Ken Paxon, who writes, “There is nothing more tragic than the death of an innocent child. Words cannot capture the grief that we feel when young lives so full of potential are lost to violence. It is not surprising, then, that Americans reacted to the most recent school shooting with sorrow, anger, and a desire to know whether it could have been prevented.”

Paxon believes gun control activists are “heavy on emotional appeal but light on practical solutions” to secure our schools and points out Texas allows school districts to approve “marshals” or “guardians” as the last line of defense against a shooter. He reminds readers in an active shooter situation, law enforcement takes roughly three minutes to respond on a good day. Trained and capable staff members — can deliver response times measured in seconds rather than minutes.

Paxon claims the deterrence factor is even more important and believes deranged, evil men only respond to force, “They are cowards, and the prospect of return fire is the only thing likely to convince them to leave a school alone.” He suggests readers remember on November 5, 2017, it was a private citizen who heroically stopped the fleeing shooter of the First Baptist Church in Sutherland Springs using an AR-15.

“The lesson is that guns are morally neutral. It is people who have the capacity to use them for good or evil. Those willing to kill the innocent in cold blood will hardly be hindered by a new gun regulation.”

My Facebook friend, Steve Grocki, takes aim at David Hogg, “TOO BAD that rabble-rouser inciter David Hogg survived the Parkland Shooting. Maybe he was HIDING in the Girls Bathroom?”

Steve adds a familiar theme from the gun-supporting lobby: Why would criminals follow the law?

Steve shared a third meme, this one from Stuart J. Prettel’s post. “Maybe the [anti-gun violence crowd] should march in Chicago.

My Facebook friend, Jeffrey Palagi, shared a post from Timothy Martin in Arvada, Colorado. This is a familiar position from conservatives. Removing guns will lead to a loss of free speech, religion and land. “It’s the Third Reich all over again.”

Is there middle ground between the political camps? A surfing Facebook friend, Bobby Gray, offers some considerations about the historical and evolving importance of the Second Amendment:

My 2 cents 😎 I have always believed in the 2nd Amendment to our US Constitution 🇺🇸 but since I worked in the “Special Weapons” division during the Vietnam war, I have been privy to some of the top secret abilities of our unstoppable military. For those who think you could arm the whole population with bump stocks as a way to overcome a corrupt leadership in our country, I just want to say our military is unbeatable no matter what you come up with to resist it. That ship sailed decades ago. The only way to overcome the danger of a enslaving government is education. The very thing that has been threatened by automatic & semi-automatic rifles. Having a weapon for protection in our violent society is reasonable, but assault weapons should stay in the hands of professional military & law enforcement. The children deserve our ears & hearts. They deserve better gun laws. You have no idea what weapons the military has & I hope you never have to find out. 🇺🇸 Aloha, Bobby Gray 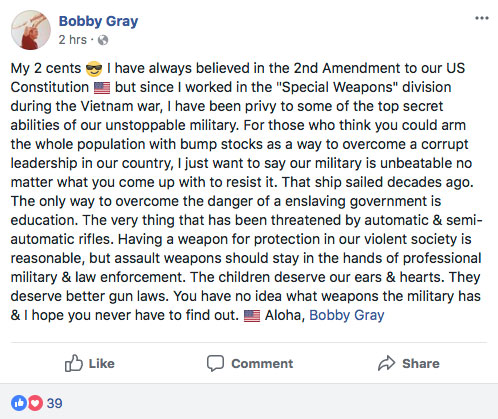 Wonetah points out one school in Pennsylvania suggests students and teachers be armed with rocks.

My Facebook friend, Angelique M O’Connell, shares a Veterans for Gun Reform video that demands a reinstatement of the assault rifle ban. 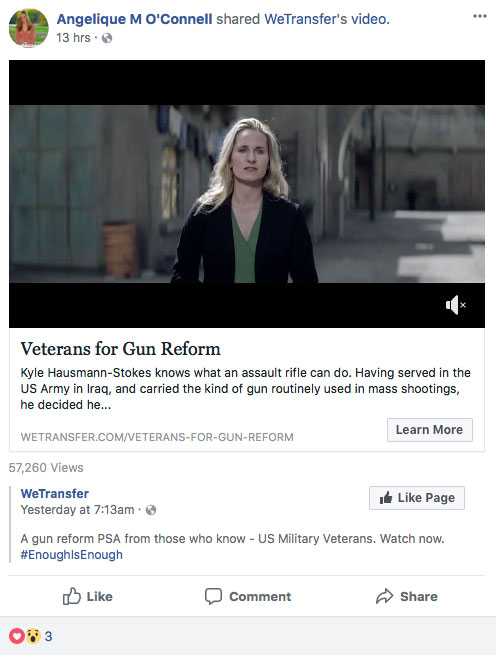 As I mentioned previously, where one stands on the issue of gun control depends heavily on whether they live in rural America or an urban area. I leave you with a final thought from Texas AG Paxon:

A sign outside of Argyle High School, which has opted into the program, reads “Please be aware that the staff at Argyle are armed and may use whatever force is necessary to protect our students.” Is a would-be shooter more likely to target such a school or a gun-free zone?

Mr. Paxon believes the answer is obvious. Is it? What do you think? Please leave your comments below and be sure to FOLLOW ClearHeath Life Strategies. We provide News of the News You Wish You Knew.

One thought on “March For Our Lives”