I was proudly raised by liberals and spent my life waging The Good Fight. Recently, I reported I accept losing that battle. In addition, I had been a strong supporter of unions — until I became a union vice president. This allowed me the opportunity to see behind the curtain and into the local’s financial records. I discovered criminal activity, incompetence, fraud and collusion. The union retaliated against me for speaking out. This is not why my coworkers and I — Republicans and Demcrats — joined. We wanted to work collectively to improve wages and conditions for all. The union was the problem.

The Left, in my opinion, has lost its way. This doesn’t mean I’m conservative. I believe the Republican party lost its way years ago. Both parties are too extreme, as they have polarized. This isn’t good for America or democracy. I’m part of the Silent Majority that exists in the middle of both major parties. It’s time we speak up and pull our nation together. A divided people will be conquered — from external or internal forces.

Everytime I go to a Walmart, I bring in a sharpie. I color on their products so they can’t sell them. That way, they always lose more money than they make when I walk in. So, I don’t have to feel guilty about shopping at the evil empire that is Walmart.

Day Na responded: “Right on!” She is from and lives in Honolulu, married to Sean Madison, and claims, “Best part of being in your 40’s is you’ve experienced enough to know what you don’t deserve.” She supports economic terrorism.

Below the fold, Rachel Frost responded: “I’ve boycotted them for years. Evil empire.” I don’t consider this terrorism. She’s voting with her dollars. Fair in capitalism.

Johnny Akzam offered some reason: “The only problem is they translate those losses into lower wages and cut hours.” 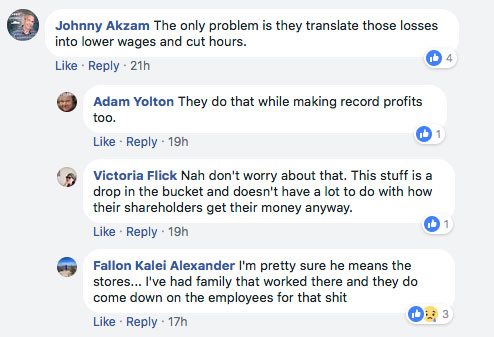 Victoria Flick disagrees: “Nah don’t worry about that. This stuff is a drop in the bucket and doesn’t have a lot to do with how their shareholders get their money anyway.” In a second post, she added, “If it makes you feel good I guess lol. Anyway there’s no ethical consumption under capitalism so have at it.” She boasts later, “I’m having too much fun trolling conservatives on a hawai’i news now fb post HELP SOMEONE MAKE ME STOP.”

Later, Victoria Flick reconsiders: “I was snarky upthread but I honestly have to say that I’m a little worried seeing so much enthusiasm here and I have to check — yall know that this does nothing, right? Same with your personal boycotts, petty shoplifting, and so on? Per their own reporting, Walmart made $482.1 billion dollars in financial year 2016. You’re just making yourself feel good and likely making some other wage slave have a harder day at work. That’s not to say one cant vote with their dollar — one dollar is worth a lot more to your local co-op and whatnot than it is to any multinational corporation”

Seht Khan chips in: “Shoplifting is also viable as long as you not stupid about it.”

Chelsea Lyons responded to Seth’s comment, “As long as it’s not a mom and pop shop. That’s my only rule.” Seht Khan added, “I never steal on the rez. That’s my rule. Aside from that I play by ear with local businesses, many of them are even more exploitative of their employees since labour laws are so scarcely enforced.”

Karin Eagle Wambli scolded Victoria Flick: “Let people do what they want…you’re not the Boss.”

I seriously can’t thank the universe enough for its guidance. God/dess, My Inner Voice, has NEVER failed me. S/he’s never failed me. Her beautiful voice, whispered to me in the mirror when I was a child. She’s always loved me, always made herself present. She’s the one that let me in on the Big Secret: that everything is possible. It’s because of her that I never stopped questioning, that I achieved all I ever wanted. It’s her voice that gave me the passion of learning, of asking, of searching and never taking “no” for an answer. It’s her voice that has taken me on all my adventures, and it’s her voice that is guiding me now. There’s a fire in my heart and it’s never (or maybe always) felt so good.

This is not how my liberal family raised me. I am ashamed my Facebook acquaintances behave in this manner and encourage others to do so. I would have responded to this post and said so directly, but Facebook has blocked my ability to comment for 30-days for linking to a post about Common Sense ways to reduce gun violence.

Chelsea’s political philosophy. Ripping off corporations they don’t like. Women should be in charge.