I’m a guy, a dude, a bro … a loathed White Male. OMG!!! I’m not sure how society came to hate ME so deeply. My father was hard on me. When it snowed, and it snowed heavily in Idaho when I was a kid, he demanded I brave freezing elements to shovel our large driveway and sidewalks. He didn’t ask my sisters to do this. It was my job to mow the lawn, paint fences and our house or wash our cars.

My sisters would get a flat on their bike. “Fix your sister’s bike!” my dad would order. “Why can’t they? They keep riding through stickers,” I pleaded. “You’re the man. Be the bigger person,” he would answer. Yes, be the man!

My sisters would snicker, “HeHeHe!!!” They would team up against me, as they understood the Power of Sisterhood. Our parents believed in democracy. It was always two against one. I would have to bribe one with promises of doing chores or favors to get to watch a TV program I liked.

Soon I gave up. I just stopped watching. Stopped doing. Stopped enjoying family life. I would go outside and play with my dog or the ants. I found peace watching the efficiency of ants in their long marches. Learned to play alone and live in isolation. My family cared about me, but I never really felt loved.

When I turned 18, I had to register for the draft. Young ladies didn’t do this. They didn’t grow up fearing to die or lose limbs in some horrific, far-away jungle to “defend our country.” I was given guns, toy soldiers and Army supplies; my sisters received tea sets and doll houses. Why did America teach me to kill? You sheltered my sisters.

Boys weren’t allowed to cry or show feelings — this was weakness. My sisters had the privilege of crying. They had the privilege to stay warm in the winter and cool in the summer. They were privileged to play in groups, whine about their limitations, and demand from others. Society expected me to push on without complaining. My family expected me to sacrifice for my mom, sisters, neighbors, community and nation. I did. So what?

Today, I’m a leper in my society. I lost my teaching job in 2001 for speaking up when three male administrators harshly shamed my 15-year-old female student. She was in my Special Ed class because she tried to kill herself the previously year. I fought for her and lost my job. Nobody had my back. I lost my advanced economist position in 2013. I was our agency’s union leader. I fought for over 100 women. We won every battle — until the agency compiled enough dirt on me. One can’t fight dozens of battles without making mistakes or creating enemies. Nobody had my back.

Lost my job in 2017 speaking up for my female Hispanic supervisor. Rosario Gonzalez suffered inappropriate treatment by male managers. For weeks she cried at her desk. “Unbearable pain,” she told me. She was afraid to bring her concerns to HR, so I did. Women can be afraid and cry. Boys can’t. Men can’t. She kept her job. I’m unemployed.

Was in third grade when my dad kicked me out of the house for hiding from bullies. “Learn to be a man or forever be a coward,” he said. He was right. I learned to stand up to bullies.

Lauren Alley, staff writer at Washington University for Student Life, describes how millions of women behave today, “I seem to have the opposite of resting bitch face. I don’t look angry all the time; I just look constantly terrified. Like, I may take off running or drop into the fetal position and cry if faced with any confrontation whatsoever.”

This is the profile of Modern Women: terrified and unable to deal with confrontation.

Women complain they are paid less than men. Rosario made $90,000 plus bonus. I made $72,500. I nominated her for a promotion. She said she was afraid to apply. Company therefore hired a White male. He was willing to take risk; she wasn’t.

The high school principal and district rep who fired me in 2001 were women. My supervisor at the web-development who tasked me to “steal” code from a competitor was a woman. My hiring supervisor with the State of New Mexico was a woman. As a male, I feel increasingly isolated and unwanted by my society. What have I done but protect, provide and serve?

Soumya Karlamangla, writing in LA Times, pointed out, “Male doctors are disappearing from gynecology.” When 19-year-old Brooke Hamel went to get an intrauterine device inserted by a doctor recommended by her sister, she broke into tears. How does a male feel when treated this way?

“He touched me and I immediately lost it. As soon as I had to spread my legs, I was in a really vulnerable place, and I did not want to be in that position with a male.”

Fox News host, Tucker Carlson, senses the frustration men suffer today. “We hear a lot about female empowerment in this country, and, of course, we’re totally for that — we’re for empowering all Americans. But for some reason, you almost never hear anything about how men are doing in America.” 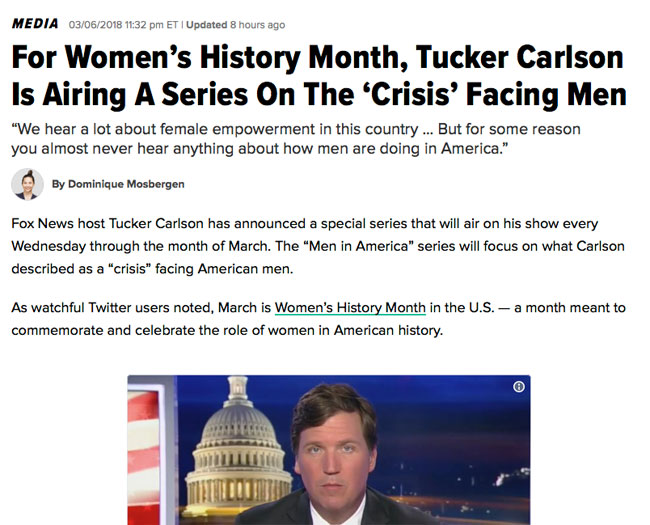 HuffPost staff writer, Dominique Mosbergen, ridicules Carlson for the timing of his program. The “Men in America” series will premiere on “Tucker Carlson Tonight” on Wednesday, March 7th, the eve of International Women’s Day.

Mosbergen is not alone. Huffington Post has a battalion of women focused on pushing down men and lifting women up. Lauren Sandler is part of the HuffPost feminist force. I have always stood for equality. Women appear to simply want to be on top.

Dr. Jerome Chelliah explains the barriers men face in silence. As he snaps on his gloves to prepare to visit his patient, women blurt out as soon as he walks in the exam room, “I’d rather see a female doctor.” This has nothing to do with merit or skill. Chelliah has a penis and isn’t respected by women. Chelliah has no choice but to comply, “I’ve been rejected many times over. As a Person of Color, I face discrimination in other ways, but it’s not so blatant … People have no problem saying they don’t want you.”

In 1970, seven percent of gynecologists were women. Now 59 percent are. Chelliah is in a field of medicine where all the patients are female and it’s more possible than ever for them to demand female doctors. The women he trained to serve are now cruel to him. Chelliah recently noticed a sign on a patient room with a picture of a baby’s foot. Above it, “Female providers only.” He keeps walking.

Women have raised their daughters to fear men, all men. When Brooke Hamel was touched by her male doctor, she “immediately lost it.” She claims she felt she was in a “really vulnerable place” when she spread her legs and didn’t want to be in that position with a male. When I get a testicular exam, I feel shy whether the provider is a man or woman. Men feel vulnerable in such situations. We’re expected to Man The Fuck Up!

Lauren Alley continued to describe how millions of women feel today, “Like, I may take off running or drop into the fetal position and cry if faced with any confrontation whatsoever. This has caused a range of problems; but the biggest of all is that it makes it fun (and easy) for people to sexually harass me. And in spite the revulsion and terror, I have some interesting stories.”

Drop into the fetal position and cry if faced with any confrontation … America is full of whips and wussies. Alley admits her character makes it “easy” for people to sexually harass her. She seems proud of her cowardice. Alice B. Lloyd talks about the “Catastrophic Success of #MeToo.” She explores a lengthy exposé published for college-age women, as a 23-year-old photographer charged comic Aziz Ansari with the crime of being a bad date. Grace was unable to speak up about his awkward sexual advances and, even though she felt uncomfortable, declined to protest or get up and leave. Grace’s considers Aziz’s behavior to be sexual assault.

My father, mother, family and society taught me to be strong; never to cry, show feelings or express weakness. They demanded I be brave when facing adversity; to get up when I fell or was knocked down; and to protect, provide and serve my society. America expected me to learn to fight and stand up to bullies. For this strength, women today claim I suffer from “toxic masculinity.” Do they admit their “cowardly feminism”?

Nobody had my back when I grew up. Nobody fought for me then or now. I’m a pariah in a society that raised me to be what I am. Why then do you forsake me? Rarely have I felt loved by America. I certainly do not feel the love today.

10 thoughts on “Men Need Not Apply”