“The part of the order that is a head-scratcher of course is this idea that people can’t go out in groups of more than one to the beach or to the beach park or hiking. That’s not based on science or medicine. It’s unsafe to send people out hiking by themselves. The same thing goes if you’re swimming, if you’re in the ocean. I don’t think that order is smart.”
Hawai’i Lt. Governor Josh Green

Should government allow only families? That’s problematic here in Hawai’i as extended family can reach up to 100s of people. Honolulu management consultant Melvin Sakurai said loosening restrictions will make enforcement impractical, “Allow family and keiki as Green suggests and everything is literally out the window.

I pointed out other locations limited the number of group activities to five or less. There should be room to compromise here. People going to the beach or hiking aren’t driving the recent spike in C19 infections. Large groups are; multigenerational families living in tight, crowded conditions suffer the most exposure.

For over ten years I served as a union leader and employee advocate in my female-dominated workplaces. Thought I heard about every ridiculous directive from backward, misogynistic or simply plain stupid male supervisors or directors. Don’t get me wrong, for every lame ass male manager, there were two female supervisors holding his beer.

Shared one incident previously. Three male administrators cornered my female special needs student in a small office and repeatedly called her a “hoe” for holding hands with a boy at lunch. She had tried to kill herself the previous year after losing both her parents in a car accident. She was an extremely fragile and sensitive 15-year-old.

Speaking with her counselor after the encounter, she pleaded with me to file a grievance. I did. Female principal, Becky Altmeter, and central office woman fired me two weeks later.

The nation of England, for example, is banning social gatherings of more than six people after a spike in coronavirus cases. Starting Monday it will be illegal for more than half a dozen people to congregate socially indoors or outdoors.

Here in the Aloha state, Honolulu Mayor Dirk Caldwell, and Governor David FrankenIGE just extended the stay-at-home lockdown for another two weeks through September 23rd — with one significant modification: residents can go for walks in the parks, on a beach or hiking in the wilderness — as long as they go alone.

“The one thing we’re not going to do a second time is rush to reopen and then have another spike and have that occur during the holiday season. So we’re going to be much more cautious, much more conservative and much more careful in terms of protecting the health of our community.”
Honolulu Mayor Kirk Caldwell

StarAd reporter Kristen Consillio covered the mayor’s announcement Tuesday at a Honolulu Hale news conference. She notified readers that parks, beaches and hiking trails will reopen Thursday to allow for solo activities, including reading, meditating, eating, jogging and sitting on the beach alone.

Knowing the danger such a directive imposes on women, she’s too intimidated to express public concern. See something; Say something as John Lewis lived is dangerous in the vindictive and retaliatory culture in the Hawaiian Islands. Kristen wants to keep her job; not keep women safe.

Sherry Menor-McNamara, president and CEO of the Chamber of Commerce Hawai’i, argued the extension brings “businesses closer to permanent closure” and that state and county officials should work with industry leaders in creating a reopening plan.

“Hawaii’s local businesses are stepping up to take the economic brunt of the pandemic. In return, they deserve to be heard and respected in determining a path forward.”
Sherry Menor-McNamara, president and CEO of the Chamber of Commerce Hawai’i

My friend, Kimberly Kam, didn’t take lightly to the attack on women and children. She wonders aloud how she can trust government. Women and children forced into outdoor activity alone rightly scares her. Only clueless males and their female cheerleaders would dream up something this irresponsible.

The government: Parks, trails and beaches open! But only one person at a time! Women you must hike alone! Children you must go to the park by yourself! A parent with you is too many people!!!!
Child and sex predators: 😛😛 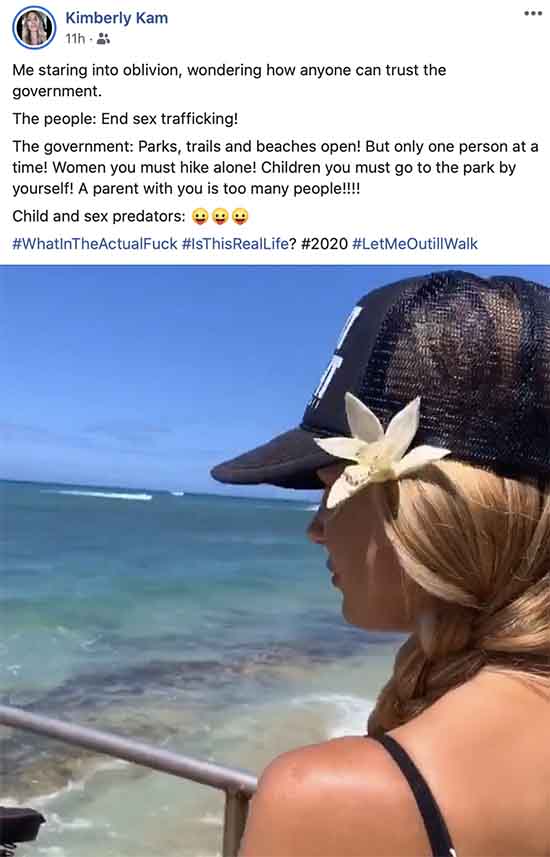 Eleanor Crisostomo says explanations are not needed. It’s simply hilarious! Only people with no friends can now utilize parks and beaches in Mayor Caldwell’s simplistic and ill-conceived directive.

“It’s not a simple one-size-fits-all. We’re going to take it … slow and cautiously so we don’t have to do another lockdown. It does mean there could be frustration with the pace, but … we’re putting health and safety first so we can get back to a healthy economy.”
Honolulu Mayor Kirk Caldwell

Seems one-size-fits-all to us. Consider a small kine family here in Hawai’i. Mom and dad sleep together all night; eat breakfast together with their two young children; but they will be ticketed, fined or possibly arrested if the four go together for a walk, sit together on the beach or hike in the wilderness as a family.

Keli’i Keezy Aoyagi is an experienced scout and naturalist. Remembers the most important rule of all here on pristine and rugged Hawai’i: If you don’t know, don’t go — and always use the buddy system. Caldwell and FrankenIGE simply are Covidiots.

Keli’i doubles down on the Constructive Criticism: So we can pile 5 people in one car … get out, go to ABC store, talk story, and walk to the beach. But once you’re there, 6 feet apart … Ige and Caldwell must be smoking good shit.

Marcus Stevens takes issue with the political culture: Hawai’i is in such a deep Democrat slumber that they actually believe people aren’t following the lockdown rules. Waking up is the hardest part, they don’t care about you or your family. They lecture us about gatherings yet have broken their own rules themselves. Their rules don’t make sense and they laugh at us because we’re just following them without question. This is ridiculous and we all should be offended at their arrogance. 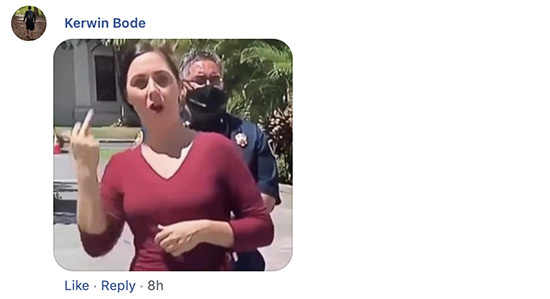 Edwin Boyette provides a more eloquent and reasoned appeal against punishing The People for the failure of the leaders:

Hawaii we need your help to restore a responsive and constrained Government. The State and County Government has failed to deliver it’s basic function yet presumes to offers solutions for the increasingly complex problems created by the Governments.

Democrat arrogance in the Executive Branch, and Democrat cowardice in the Legislative has created a dysfunctional nanny state where Mayor Caldwell live-streams lectures about not inviting over tutu to your home.

This feels like a bad joke, a tyranny of incompetency — where Hawaii’s leaders explain in vapid tone, why they are compelled to collectively punish the people for the failure of the leaders. 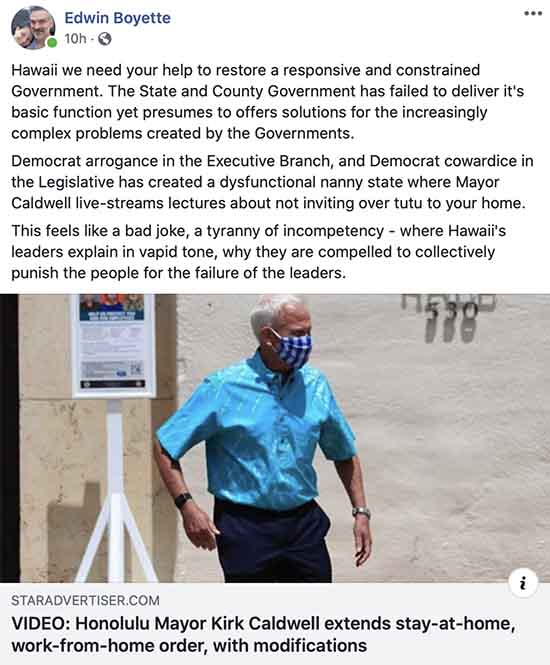 Lee Cataluna penned a scathing editorial from her new home at CivilBeat. She believes the governor needs a new theme song, something like, “Gov. Ige has cobbled together a ragtag group of long-time bureaucrats who will ultimately take the fall for him when things go wrong.”

Hawai’i is the shallow state: a stagnant, mossy little pool where no one is challenged, not much is expected and appointed administrators are simply waited out.

State DOH Director Bruce Anderson and Public Safety Director Nolan Espinda are out; Emily Roberson, brought in just last month to get a handle on contact tracing, asked to be out until the agency resolved power struggles. State Epidemiologist Sarah Park is sidelined. State Tax Director Rona Suzuki is out; Pankaj Bhanot, director of the state Department of Human Services, out. Department of Labor and Industrial Relations Director, Scott Murakami, out. Chris Tatum out, as head of the Hawaii Tourism Authority. And, include Verne Miyagi, who took the fall for the false missile alert that could have been somewhat mitigated if only the governor remembered his Twitter password.

Lee pointed out there’s no covering up the state’s failure in dealing with the pandemic, not when we went from lofty ideas of marketing Hawai’i as the “safest place on Earth” to hundreds of new COVID-19 cases a day. She reminds of us talk in D.C. is of the “deep state.” Hawai’i is, in her opinion, the shallow state: a stagnant, mossy little pool where no one is challenged, not much is expected and appointed administrators are simply waited out.

The question she asks is did we expect great leadership from a guy who brought us the TMT stalemate, false missile alert and forgotten promise to finally upgrade the state’s computer systems?

No one ever thought we’d need anything more than a nice guy who was a good student in school and a stable, unimaginative lawmaker to sit in that chair. We didn’t know how much we’d need a leader with gumption.

Indubitably, The People are being punished for the failure of this governor, Honolulu’s mayor and our shallow, stagnant and mossy little pool of government and business officials.