As our nation celebrates 100 Years of women earning the Right to Vote — 19th amendment passed August 18, 1920 — women are enraged. “I am a rage mom,” said Senator Patty Murray, highest-ranking woman in Senate leadership. “Well, a rage nana, at this point, as my granddaughter would say.”

“I am so full of rage,” said Alida Garcia, the vice president of Fwd.us, an immigration advocacy group and mother of 1-year-old twins. “We are exhausted.”

More women than men reported participating in protests over the past two years. And, mothers with children in the home were twice as likely as fathers to participate in a protest, according to a Kaiser Family Foundation poll. 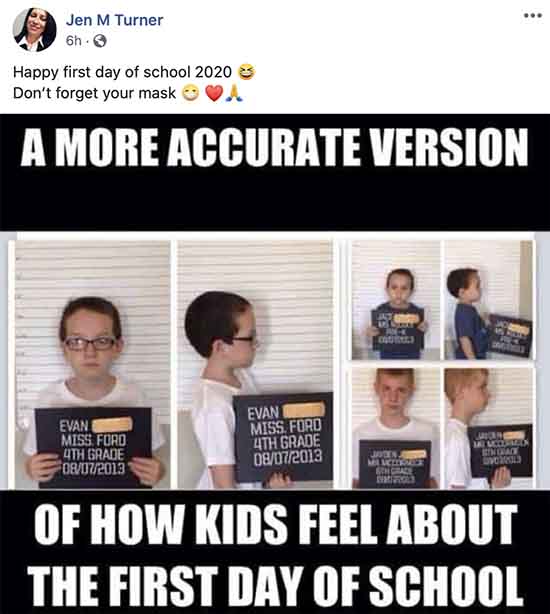 Women are emotional and frustrated at this time. How terrible for them and their children, right? Who wants to live like this? It’s a difficult time for all.

“There’s nobody giving us solutions,” said Kim Lopez, a mother of three in Glendale, Ariz., and part-time financial assistant, who is still unsure what her children’s schooling will look like this year.

Too many Americans consider themselves privileged. They don’t deserve to suffer the COVID-19 pandemic. Someone needs to fix this now. RAGE!!! RAGE!!! RAGE!!!

I’ve been researching female issues since the 1990s. Told my wife during the decade the 21st century would belong to women. Much of my opinion came from observing top political officials, such as Hillary Clinton or national entertainers like Oprah. The female voice was ascending.

Jen wishes everyone a “Happy Fucking Monday.” As women ascend, they kinda want to get their lives and the nation going. Well, do you or don’t you? 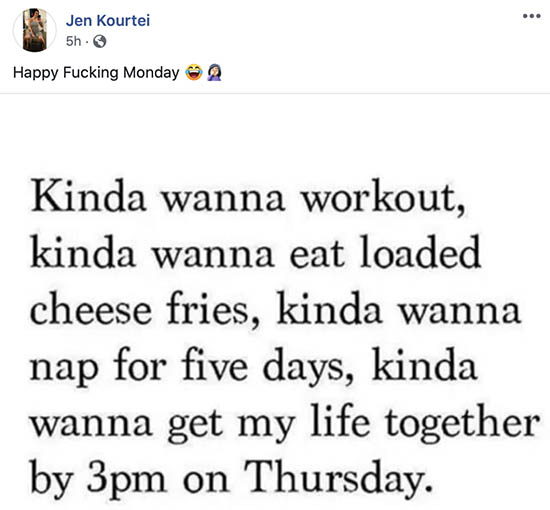 I worked with Hillary’s primary campaign in 2008. There was an infectious wave of inclusiveness, collegiality and positivity. Yet a dynamic young Black male stole the Hearts & Minds of Americans. Hillary was rejected. Her core supporters, primarily female, were seething. Once again, a male …. and a Black man at that … pushed a woman from her “rightful” destiny.

For eight years this anger continued to percolate and grow. Female support for the Obamas coalesced behind Michelle, not Barack. Hillary had served as U.S. Senator. She punched her foreign policy ticket as Secretary of State, and dropped out of government after Election 2012 to prepare for a presidential run in 2016. It would be “Her Turn” and supporters were passionately committed, “I’m With Her.”

Yet an elderly Jewish man captured the Hearts & Minds of Americans in 2016, not Hillary. Bernie Sanders had millions of young voters, right and left, “Feeling the Bern.” While both Donald Trump and Hillary had historically high “negative” reviews, Bernie was loved.

Hillary would not stand for a second Democrat party snubbing. Female colleagues in the DNC obstructed Bernie throughout the primary race. U.S. Congresswoman Tulsi Gabbard resigned her executive position with the DNC in protest.

All indicators suggested a Hillary victory. Yet polls and predictions were wrong. Donald Trump became #45, not Hillary. Hillary was so incensed, she left her supporters standing in the cold night air refusing to speak with them.

The Enraged Liberal Woman Was Born

Hillary and followers didn’t accept defeat. Hillary still claims she was cheated. First pointed to the Russians. Putin meddled — yet not for Trump. Hillary had interfered in his 2012 presidential campaign while Secretary of State. The former KGB official despised Hillary for her opposition. Putin has no love for Trump. He simply hates Hillary. She brought Vlad’s animosity on herself. 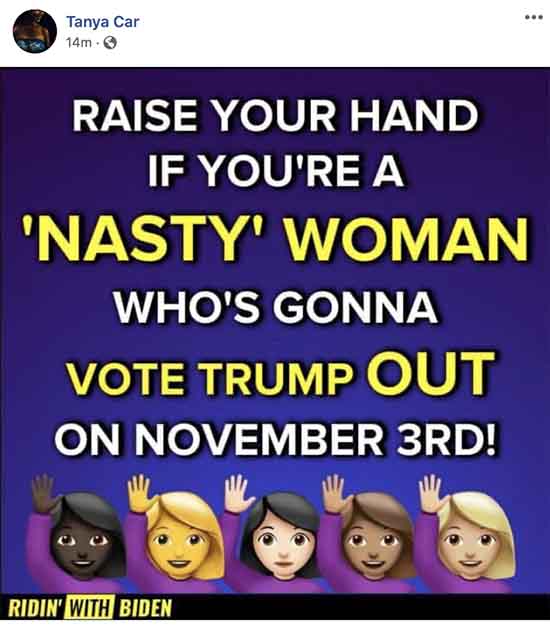 Hillary claimed she deserved the White House, as she received more popular votes than Trump. The Founders did not support direct election of the president. We’re a Republic, not a democracy, and states elect the president. The Electoral College derives from the Connecticut Compromise, as rural areas and small communities long feared the political power of cities and crowded urban centers.

Fellow Democrat Al Gore bested George W Bush in the national vote during the 2000 election. Hillary did not complain. She was enraged at Gore for distancing himself from her husband, as the president suffered fallout from his affair with Monica.

Most importantly, all believed (including myself) Hillary was one of the smartest politicians in U.S. history. Any wise candidate would have selected Bernie Sanders as vice president. He owned youth in America. Hillary wasn’t loved. Bernie was. Combined, the two would have defeated Trump 60-40. Bernie was their favorite; emotional Hillary wanted to be loved more than she wanted the White House. She selected Senator Tim Kaine and cost herself the presidency.

Sophia Lehua Levesque lives in Wainiha on the north shore of Kaua’i. That’s about as far as one can get from Washington, D.C. and U.S. politics. She lives an idyllic life nested under waterfalls, breathtaking rainbows and some of the most beautiful ‘aina in the world. One would expect Sophia to be a Happy, Grateful Mom. 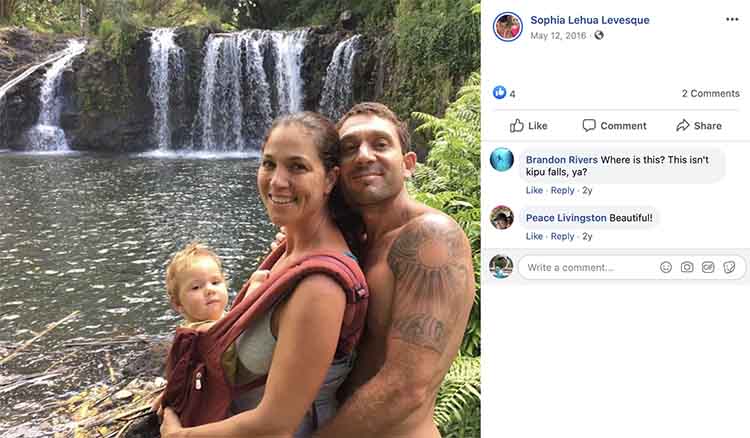 What a beautiful family. Millions of Americans would give their right toe to live like her. Yet Sophia isn’t thankful. She’s angry; she’s furious; she’s a Rage Mom who hates Donald Trump — because she has a RIGHT to be enraged. Look at the disaster of her life (above).

Sophia wrote: 1st day of kindergarten for our princess. When I asked how her day went she said “AMAZING” 😂 #biggirl #hanaleischool #icriedwhenidroppedheroff

Hillary has been a sore loser since the election. She encouraged her supporters, primarily female, to #Resist. For the first time in modern history, the losing candidate didn’t shake hands for the good of the country. Hillary continued her opposition. Liberal women have remained enraged.

Trump’s signature campaign promise was to Build a Wall. Bill Clinton worked as president to secure the southern border. GW Bush did as well. As U.S. Senator, Hillary voted to build a wall. President Obama built walls and housed the flood of illegal immigrants in caged areas. Yet liberal women call Trump racist.

Everything Donald Trump does is considered racist, sexist or an attempt to destroy democracy. Months ago, Trump questioned whether the 2020 election might need to be postponed. Outrage from the Left. Yet New Zealand, which appears to lead the world suppressing C19, just postponed its election to focus on fighting a second wave of the coronavirus. Reason vs. Emotion. 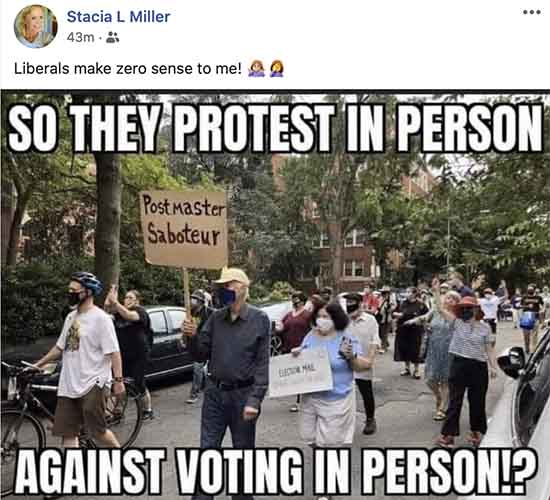 The president does not control operations of the Postal Service nor does he select or appoint the Postmaster General. Board of Governors does this. Postal Regulatory Commission (PRC) sets rates, service levels and decides on postal closings, not the president. During the Obama administration, over 12,000 mailboxes were removed for good reasons, such as underuse, and have saved the service hundreds of thousands of dollars a year.

Robert Duncan now serves as Chairman of the Board of Governors. He was reappointed to the Board in 2019, as the U.S. Senate unanimously confirmed him again 89-0. Unanimous.

Ron Bloom was nominated by President Trump and confirmed by the United States Senate to serve on the Board of Governors. President Obama appointed Bloom in 2011 to serve as Assistant to the President (Obama) on Manufacturing Policy.

Michael Jackson figured out how to save the USPS. Unfortunately, he won’t buy stamps unless they read, “Fuck Trump.” 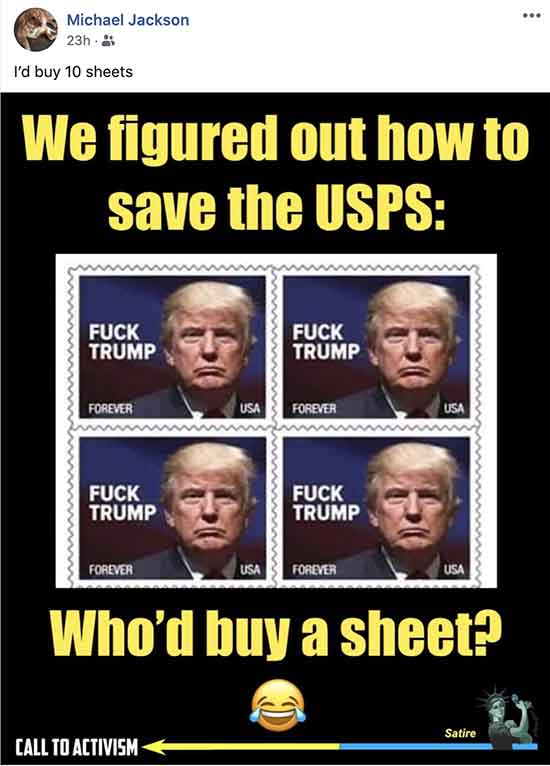 The Political Left’s action is again emotional rather than reasoned. They’re angry because there is no mail delivery; no coins; no concerts, theater, ballgames or paper towels. Kids can’t go to school. Over $3 trillion in debt last year. Food lines stretch for miles; 30 million unemployed; and we can’t leave our country. Direct your anger and rage toward Trump, they say. 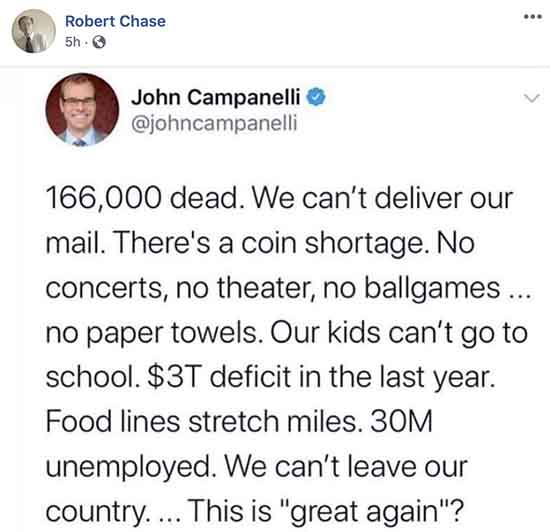 Democrats young and old now decry Americans for our racist past and continuation of White Patriarchy. Running for Attorney General of New York, Letitia James claimed the Democrat Party was “too male; too pale; and too stale.” Yet the top two vote-getters were Joe Biden and Bernie Sanders — two White Grandfathers.

“Unless we do something about this, my children are going to grow up in a jungle, the jungle being a racial jungle with tensions having built so high that it is going to explode at some point. We have got to make some move on this.”
U.S. Senator Joe Biden 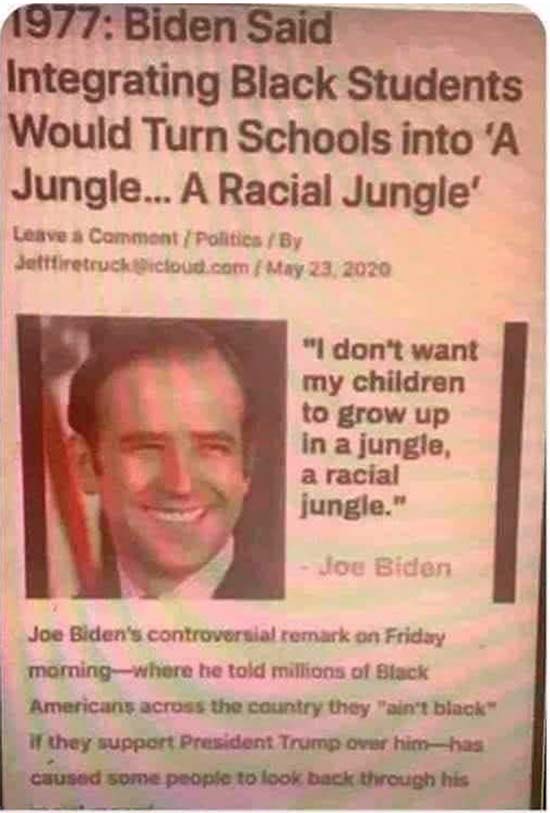 U.S. Senator Joe Biden was the Democratic party’s crusader against busing at the time, who stood with segregationists. Biden “joined up with Jesse Helms, the segregationist senator from North Carolina, to offer his own anti-busing amendment to that year’s education spending bill.” Biden’s “advocacy made it safe for other Democrats to oppose busing,” the NYT reported.

Coronavirus shut down the nation as well as political campaigning. Joe Biden became the presumptive nominee. In part due to the #BlackLivesMatter movement, the Political Left demanded a Black female for vice president.

Biden surprised me by selecting Kamala. I believe Susan Rice was more qualified. Harris had attacked Joe repeatedly and harshly in the primary.

Harris claimed she “believed” the women accusing Joe of sexual assault, yet volunteered to partner with him in the presidential campaign. To me, this is a fatal betrayal of women who have suffered. 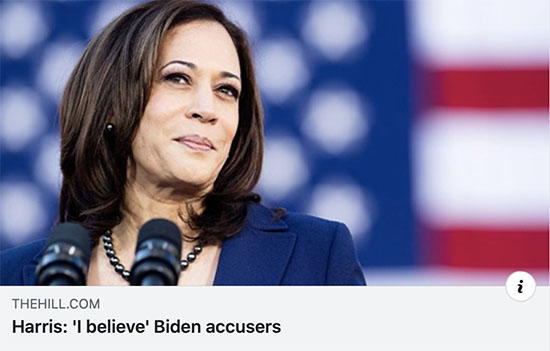 Senator Biden and President Clinton passed the 1994 Crime Legislation. This put 100,000s of police officers on the street — rather than rebuilding imploding cities and adding schools. Millions of Black males were arrested and incarcerated, which set the foundation for #BlackLivesMatter protests. Hillary called teens, “super predators.” 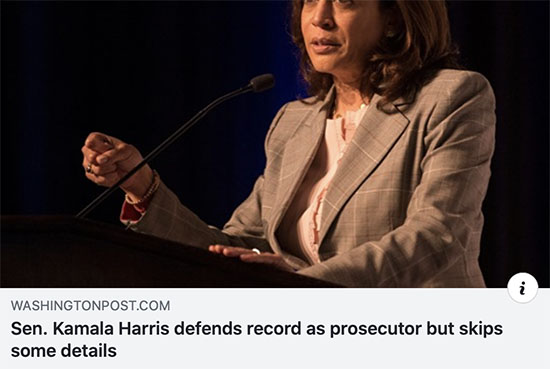 As Attorney General of California, Kamala imprisoned tens of thousands of People of Color for low-level drug crimes. No reasoned people would select these candidates. 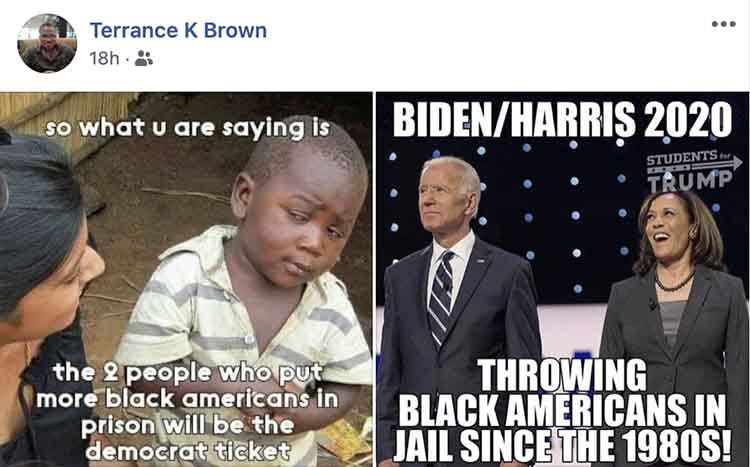 Kamala confuses us about her recreational drug use. She admits to smoking weed in college. Nobody cares. Yet she claims she listened to Snoop and Tupac. She graduated prior to their music being released. 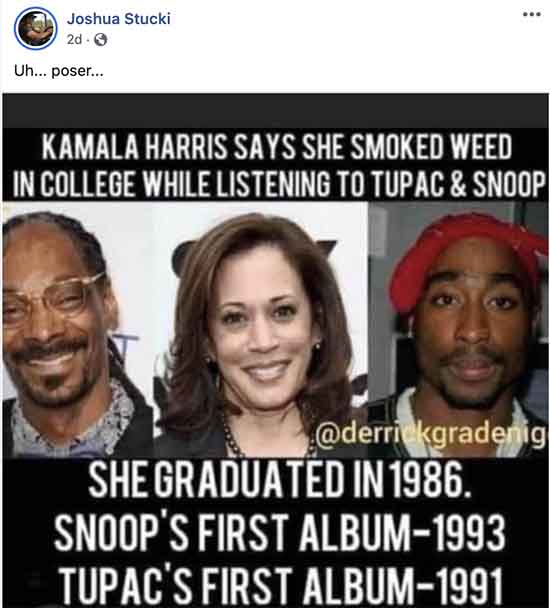 This means Kamala smoked weed long after college. Still nobody cares — but this privileged woman was locking up poor Black, Brown and White people while indulging herself in the joyful substance. 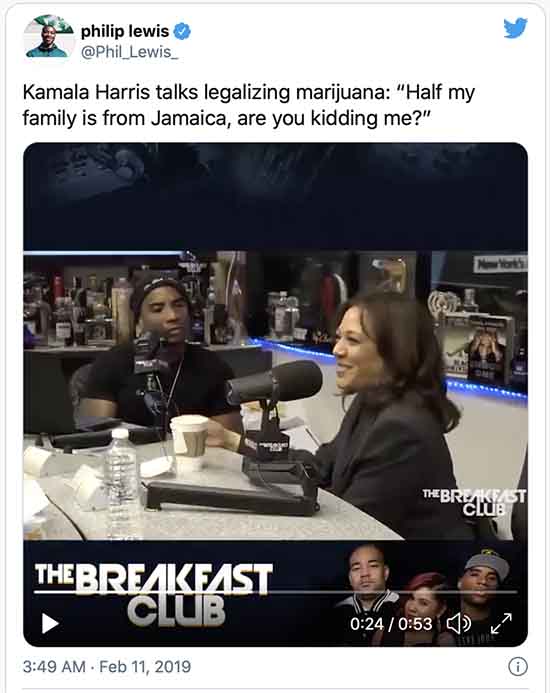 The Left has two distinct wings of outraged constituents. Coke v. Pepsi it appears to be. Different than 2016, it’s uncertain how many who feel disenchanted will defect to Trump. 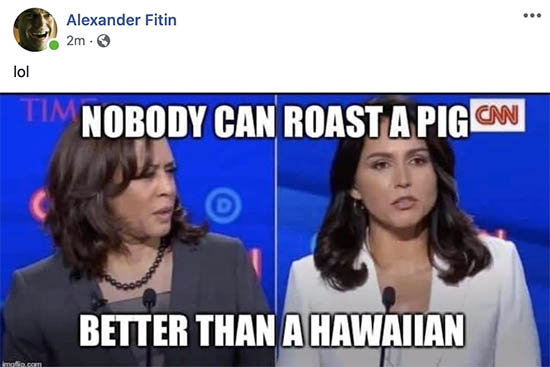 Young Delegate Coalition, a group of 225 delegates representing Biden, Sanders, Pete Buttigieg and Liz Warren at the convention, launched a petition urging the DNC to give Ocasio-Cortez more speaking time. 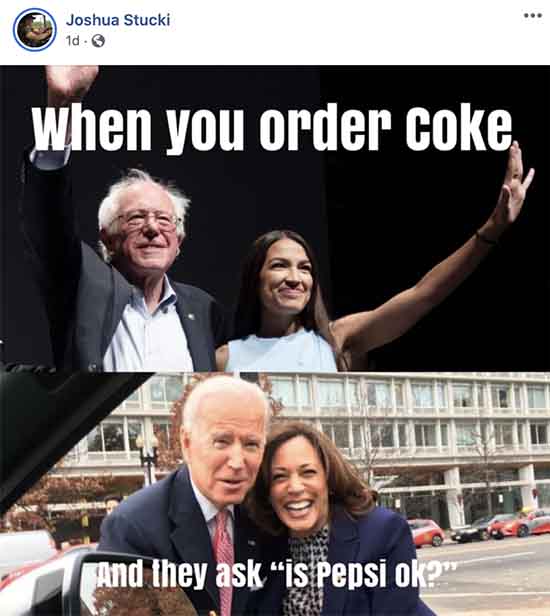 “She is one of two convention speakers under the age of 50. Yet, she is only being allotted 60 seconds to speak while Republican John Kasich is slated to have a much longer speaking segment. This is unacceptable.”

Even Caroline Rose Giuliani supports Biden-Harris at this time. Says it’s time to “start to turn this DISASTER around. It’s a matter of life and death at this point. Remove Trump!” 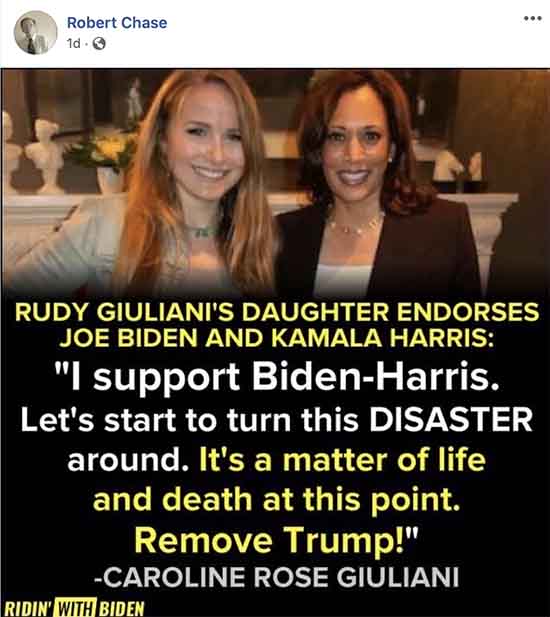 I used to be proud of liberals. They expressed a commitment to tolerance, inclusiveness, kindness and working together. Now their position is everyone must “agree with me or else you racist, sexist, homophobic, Islamophobic, xenophobic, inbred, redneck, bible-thumping, NASCAR-loving, gun-toting, America-loving bigots.” 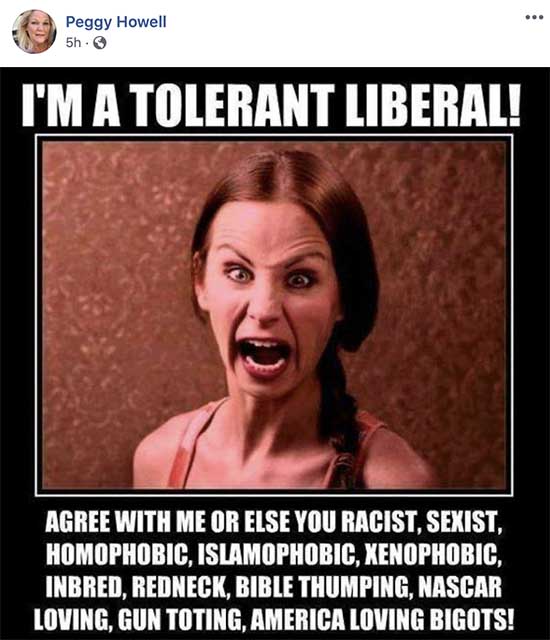 What the hell happened to women in America? Is this 100 Years of Progress?