Elected officials and public health bureaucrats have demonstrated over the past 3-4 months they are incompetent, privileged and frightfully uncaring about people across America. I’m speaking about both sides of the political spectrum: Republicans and Democrats, as well as officials we used to consider “experts.” They have been DEAD WRONG.

Not In The Same Boat

Here in Hawai’i, Governor FrankenIGE allows possibly infected individuals to enter our ‘Ohana using a self-isolation system. Two days ago, about to enter an elevator, there were four people inside when the door opened. Visitors! None wearing face masks — although complex rules require face coverings.

Ige now proposes to take photos of the arriving passengers, as if this will force them to comply with self-isolation rules. Hilarious if it wasn’t a dangerous, deadly decision.

Democratic Governor “Dangerous Dave” Ige hides safely in his bunker. He receives testing, protection, and drives a car rather than ride public transportation. These four new visitors present ZERO risk to him. His political supporters make money. This is why he allows visitors to roam our island.

For weeks, I have been begging the governor to quarantine ALL arrivals in a special COVID19 hotel until they demonstrate negative for the virus. He doesn’t care about us at all. He doesn’t want to inconvenience tourism and the Golden Calf of the islands.

Republican President Donald Trump still refuses to wear a face mask. Although people close to him have now tested positive, Dumbo Don continues his arrogance. Says he is reluctant to wear one:

“I think wearing a face mask as I greet presidents, prime ministers, dictators, kings, queens, I don’t know—somehow, I don’t see it for myself. I just don’t.”
President Donald Trump, April 2020

Trump sets a poor example for the nation. He’s king; we’re expendable. Those around him are constantly tested. He can physical distance. He has unlimited money and resources. He doesn’t give a hoot about us.

Governor FrankenIge appointed Lt. Governor Josh Green, MD, to lead the COVID19 response in the state. I’ve worked with the Lt. Gov previously. Decent, compassionate man. Does not appear to know much about infectious disease.

UPDATE 5.14.20: StarAd reported Lt. Gov is opening a free clinic to assist recently unemployed who have lost health insurance due to the coronavirus pandemic. Compassionate act!

Josh is an emergency room doctor on the Big Island. Along with Dr. James Ireland, a community physician, the two are partnering to open Aloha Free Clinic to help those who do not qualify for Medicaid. The clinic will open on June 1 through Aug. 31 at the Kalihi Medical Building at 2055 N. King St.

Our Lt. Governor is a compassionate man who will give his best to save you in an emergency. Unfortunately, he doesn’t appear to understand infectious disease that gets us sick in the first place. The key to defeating COVID19 is not to get infected. If you end up in the emergency room, there’s not much the good doctor (or any doctor) can do for you.

Due to our warm, humid weather with strong sunshine and much fresh air, most experts believe Hawai’i is a poor-quality environment for the SARS-CoV-2 virus. It survives better in cool, dark and relatively dry environments. It also survives longer in hot, dry climes like Arizona or New Mexico. Hawai’i may be in a climate sweet spot that helps disintegrate viral pathogens.

When W.H.O and others sounded the alarm, I wrote to Dr. Green March 19th and pleaded with him to #MaskUp our local population. Wrote almost daily. Yet Dr. Green did not respond. Had the doctor listened to me, we would not have suffered all the infections — and deaths. Too slow, Doc! People died due to your lack of care (see Red Box above).

Lt. Gov Green now proposes a Travel with Aloha plan. Insane! Emailed both Dr. Green and his chief-of-staff, Jeremy Lakin, today. Titled my email, “Travel With Aloha Dangerous.” No response from either. They do not care about us!

“The concept is to get a negative test within 72 hours before you travel, so that not only are you feeling safe, but the next group over feels safe and our workers and our hotel teams feel safe. Everyone will feel better if we know that we’re traveling with aloha.”
Hawai’i Lt Governor Josh Green

Travel With Aloha is dangerous because a potential visitor must test “up to 72 hours” prior to travel. For example, Traveler Smith tests on Monday. Tests reveals negative COVID19. Yet Mr. Smith is infected Tuesday without his knowledge. He travels on Wednesday morning.

Per Dr. Green’s plan, Mr. Smith “feels safe; the next group over feels safe; and our workers and our hotel teams feel safe. Everyone feels better if we know that we’re traveling with aloha.”

Yet NOBODY is safe. Lulled into complacency, more people are infected. Lt. Governor Josh Green, MD, just put ALL people on the airplane at risk; put all those in both (or more) airports at risk; and risked the lives of all those in the Hawai’i ‘Ohana. Well, not all. Governor FrankenIGE stay safe. Dr. Green stay safe. Top officials and privileged celebrities stay safe. Ordinary people are not safe! They do not care about us!

Let Your Voice Be Heard 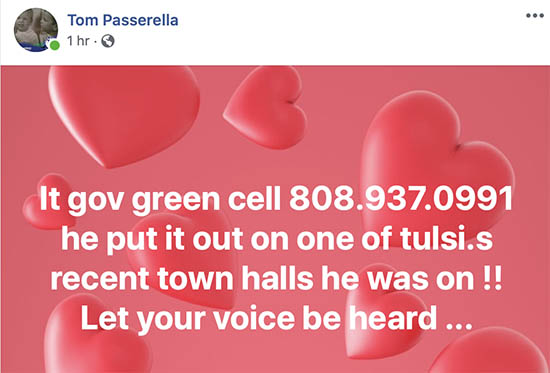 People are becoming restless. Governor FrankenIGE blocked beaches, although these are some of the safest environments and people need exercise for health and mental stress-relief. Six suicides were announced today: five men and one woman, all had young children. Locking people down unnecessarily kills. Allowing potentially infectious arrivals into our ‘Ohana kills.

Maj. Gen. Kenneth Hara, incident commander for Hawaii’s COVID19 response, warned a state House committee Monday about the possibility of rioting in Hawaii if “we let the economy go the way it’s going.” 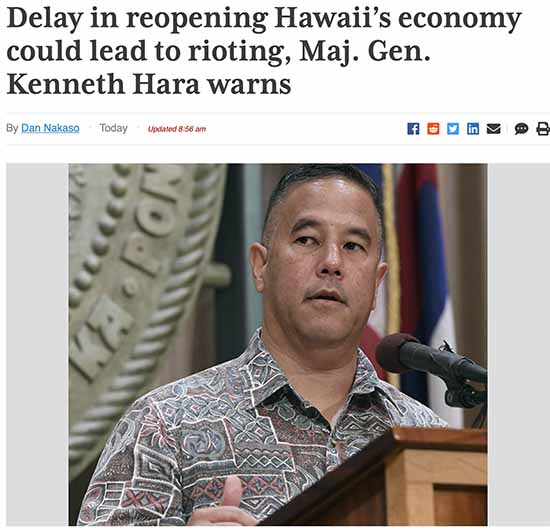 Local residents WILL NOT riot if they receive their unemployment, which stay broken in Hawai’i; the federal COVID supplement of $1,200 or more; and do not feel they are in danger.

Allowing arrivals into our Safety Bubble, dropping quarantine protections, hiding in safety while exposing the rest of us will lead to civil disobedience, rioting, and possibly violence. Why not? Authorities do not care about us!

“On today’s report of COVID-19, the total number of people tested positive for Hawaii Island is 75. All 75 have been cleared by the Department of Health as recovered, leaving no active case on the Island of Hawaii.”

There are now no active COVID19 cases on Big Island or Kaua’i, according to the Hawaii County Civil Defense Agency. There can only be breakout if someone new arrives on the either island.

Residents have done our job. When will elected officials and public health bureaucrats do theirs?