Democrat opposition to the Trump presidency has been fierce since 2016. Some twenty-seven challengers threw their hats into the campaign, twenty-eight if we add late-entry billionaire Mike Bloomberg. Three remain: Joe Biden, Tulsi Gabbard and Bernie Sanders. 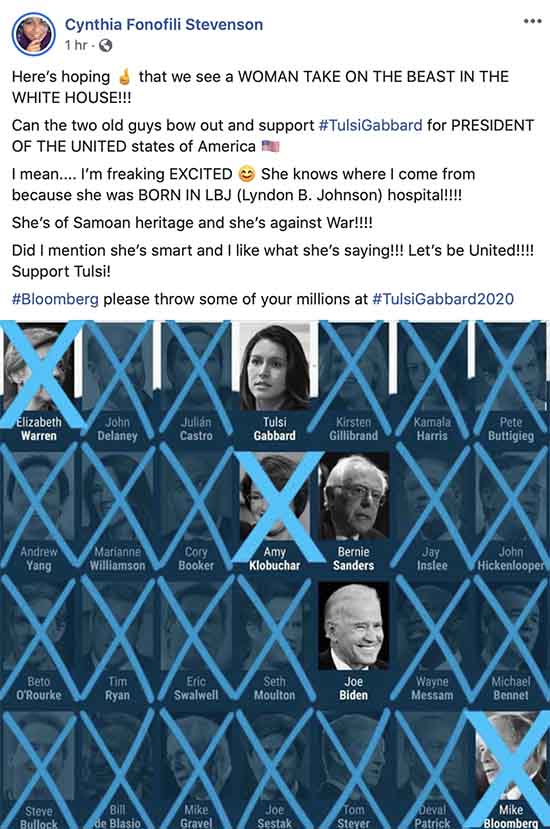 Top two contenders, Joe and Bernie, are White males over 70 years of age. Their differences are quite pronounced. How can both candidates, as well as their supporters, co-exist in the same political party? 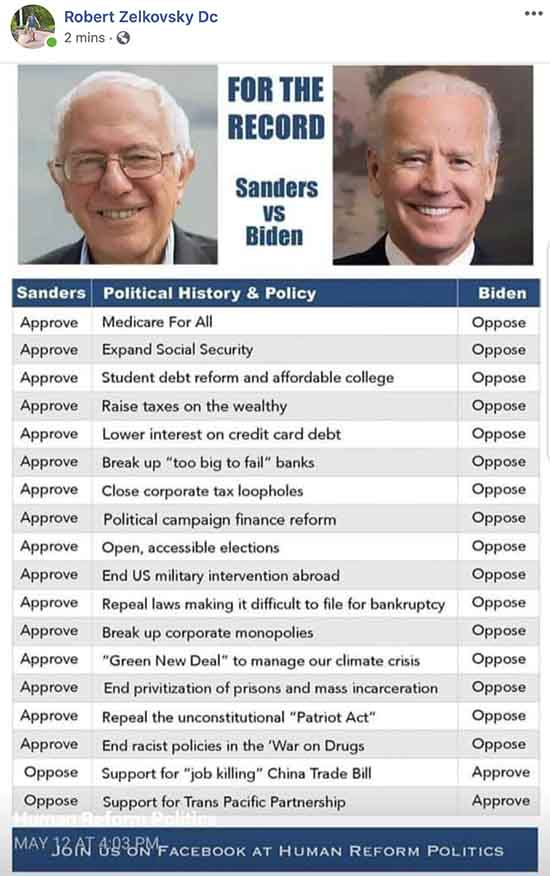 Speaking at the 2017 Women’s Conference in her bid for Attorney General of New York, Leticia James complained about the lack of diversity in the Democratic Party. Her concern: too male; too pale; and too stale. At 61, Ms. James became the first African-American and first female to be elected to the position.

With the suspension of populist Massachusetts Senator Warren’s presidential bid Thursday, Democratic women across the country are feeling dejected. “One of the hardest parts of this is all those little girls who going to have to wait four more years” for a female in the White House, said the senator as she choked up.

“The emotions would vary from anger to resignation to determination among women about the fact that there’s no women left in the race.”
Kathy Sullivan, Democratic National Committee member from New Hampshire

Will this lead to a lack of interest on the part of female, younger and minority voters? They have an outstanding youthful, female and minority candidate remaining in the race.

Why Do Such Elderly People Run America?

Derek Thompson, The Atlantic, asked readers why America is run by such freakin’ old people. He believes, “Sanders is too old. So is Biden. Trump too.” Yet here we are. Derek noted, “When Joe Biden climbed to the stage in California to celebrate his Super Tuesday comeback in the Democratic primary … He mistook his wife for his sister.”

Biden, Derek pointed out, is 77 and too old to hack it in his opinion. However, rival Bernie Sanders already suffered a heart attack during this campaign and is a year older. In January 2021, the three people most likely to be the next president — Biden, Sanders, and incumbent, Donald Trump — will each be the oldest president to ever give an inaugural address in American history. They also will be three White males.

All three White men were born in the 1940s, before the invention of Velcro and the independence of India and Israel. Amazingly, each is currently older than any of the past three U.S. presidents. 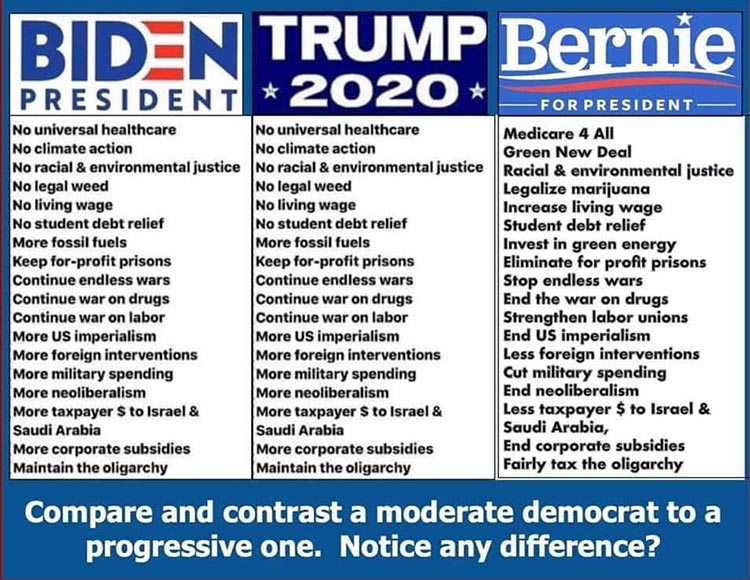 Why? One reason is Americans are getting older and voters over 65 go to the polls more often than do younger voters. Research suggests voters typically prefer candidates “who are closest to themselves in age.” 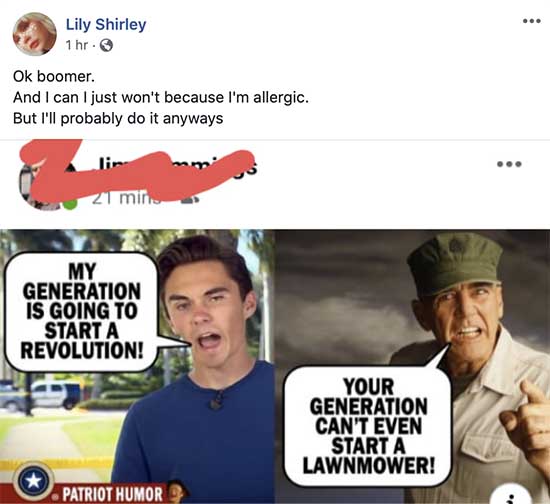 Derek claims if we extrapolate this trend, America’s next breakthrough presidential candidate will be some 35-year-old YouTube influencer who just recently learned about the filibuster. Or possibly a 38-year-old female war veteran who runs an Aloha Campaign from the middle of the Pacific? 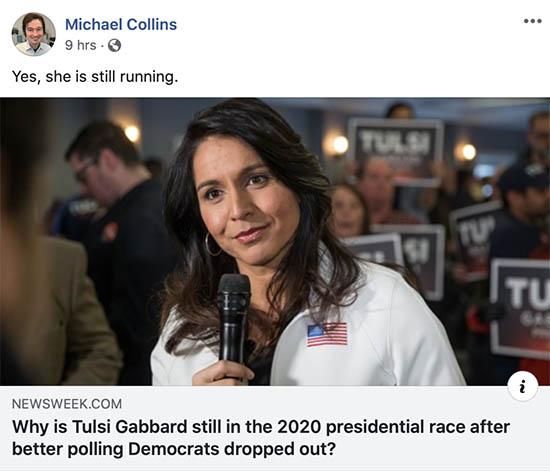 Tulsi Gabbard Is An Experienced Novice

Chatting on social media yesterday, many conversations focused on Liz Warren’s exit from the primary season. Had she won in 2020, this White female would have become the oldest president-elect in American history. Some claimed Warren couldn’t gain traction due to “sexism.” Yet millions of men supported Liz, while millions of females support Bernie and Biden. Identity politics leads to weak arguments.

One commenter, Annie Allison Cheeney, expressed her frustration with American voters: “Hey America I need you explain it for me like I’m a 2-year-old. What is the deal? Do you hate women? Do we scare you? Why can’t a girl get picked?”

“In the early days of this race, voters had a range of women to consider, some more conventionally qualified than others. There were four senators, a congresswoman and a self-help guru who varied in age, race, personal background and professional experience. They hailed from different regions, had different political styles and visions and espoused different policies.

One by one, these candidates fizzled and fell away: Senator Kirsten Gillibrand of New York, who had pitched herself as a champion of women’s issues; Senator Kamala Harris of California, the tough talking former prosecutor; Marianne Williamson, with her premonitions of dark psychic forces; and Senator Amy Klobuchar of Minnesota, the Midwestern moderate who hit her high point with a third-place finish in New Hampshire.

Representative Tulsi Gabbard of Hawaii is hanging on but has never been more than a curiosity (though she did come in second to Mr. Bloomberg in the caucuses in American Samoa on Tuesday)”

Annie is a compassionate, kind, thoughtful and informed citizen. Why can’t the Democratic party select a woman? Of course, they did last time, and it’s clear the Left is dominated by strong, politically-active women. Why aren’t they resonating with voters? I asked Annie if she supports a female candidate at this time?

Annie
There are more women in this country of voting age than men. I know I felt a deep heartfelt ache realizing a woman couldn’t win. I see my job this cycle as one to support a candidate the majority will vote for to successfully remove Trump.

Annie’s not sexist. Her only concern is selecting a candidate who she believes can defeat the incumbent in the White House. I pointed out Tulsi Gabbard remains in the race. She’s youthful, a Person of Color — and female.

Annie
I hate to admit it but for me, she couldn’t gain enough visibility to be considered. She is a mystery to many voters. It is because of this she can’t beat Trump. It’s a big problem.

I favored Warren personally but I see this election cycle as a moral imperative to vote for anyone who can beat Trump. What I’m saying is right now she has two delegates. That won’t carry enough weight, I had to make a judicious choice and voted against my personal politics in favor of the greater good.

Annie
To beat [Trump] we need independent voters, Green Party voters and dissatisfied leftists to come to polls and finally vote person over party. My point is I learned something after 2016, I do strongly support Clinton it was more than a crushing blow to see her lose and to lose to Trump, so this time I watched closely, counted on every debate to see the strong women on stage hold court, and watched with deep dismay as the country refused to listen.

So I voted my conscience and it broke my heart. Many of us feel that way right now. We are not okay. We are devastated and we are frustrated, but we are scared. I don’t Biden or Bernie are better, but I know I can’t sleep at night if I don’t do all I can to stop Trump in his tracks.

I then asked what makes Annie think Biden or Bernie can defeat Trump?

Annie
Good question! We know Bernie’s platform is too progressive, too radical left for the moderates & conservatives altogether. The only way we win against Trump is to unify under a candidate that can speak to a wider scope of ideological beliefs.

Mentioned I serve the campaign of a young, female of color. In my political opinion, if women joined with us, Tulsi Gabbard would defeat Trump. She can’t do that if women won’t support her. The Borowitz Report humorously urged Tulsi to drop out. 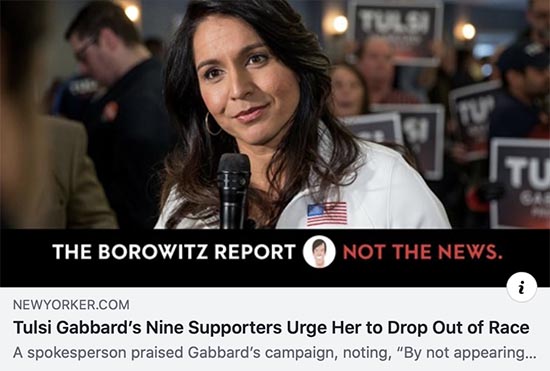 Tulsi is challenging to define and this hurts her visibility. I support her message because she is part progressive, part conservative. This makes her moderate and she speaks to both sides of the isle. 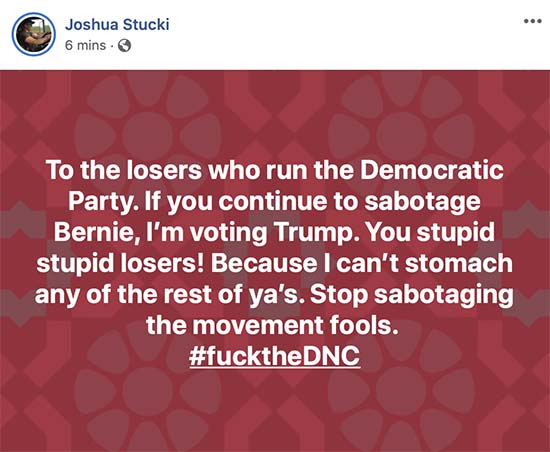 Tulsi’s agenda is simple: lead with aloha. Stop the infighting and government gridlock. Her political views are moderate. She seeks compromise rather than HER way. To some, this makes her appear fuzzy. But she’s clear — no more unnecessary wars. Focus on the people here at home!

Compromise is always complex — but democracy requires compromise. One thing is certain. We aren’t compromising today! We’re polarized, angry and divided. And a divided political Left will not likely defeat an incumbent president. 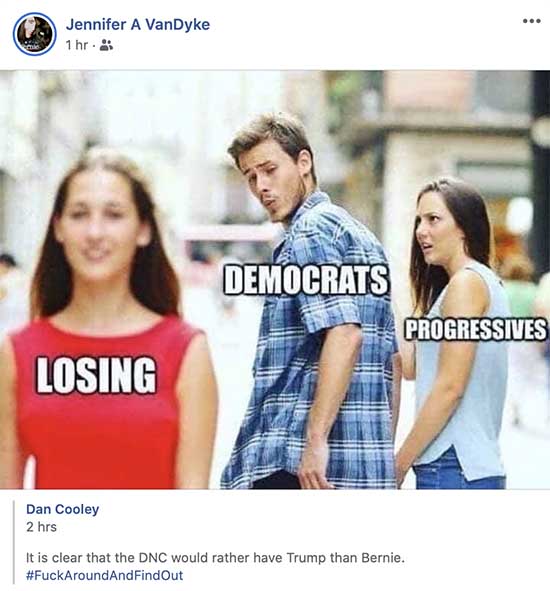 This doesn’t mean Tulsi’s not without flaw. She admits she’s imperfect — as are we all. Tulsi is humble. This allows her to be compassionate as well as wise.

Annie
I’ll vote for her if she can gain the delegates and the focus of the party. I don’t disagree with your philosophically and I hope on the day we have a candidate the country will crowd behind.

And anytime!! Loved your contribution

Thank you, as well. Tulsi would love your support. How about $1 to strengthen America’s Aloha Team? Fight for women; fight for all Americans!

Annie Allison Cheeney: I’ll do it.

You should join Tulsi’s campaign as well. We need youthful, wise and compassionate energy in our nation at this time. Take a closer look at Tulsi Gabbard. You’ll be glad you did!

One thought on “Aloha Friday: I Support Tulsi (You Should Also)”