So much of living a healthy life depends on a person having clarity about their world — a Clear Health Life. News is generally dark and ugly, and impacts each of us negatively in return. Being clear about our history and actions today helps people reduce anxiety, overcome depression and focus on a more positive life going forward.

Take a Moment to Learn Your History

In the initial wave of anger, the Iraqi government demanded their national representative take down the photograph, apologize and condemn Israel – which Idan refused to do.

But two years on, Adnan’s daily life remains plagued by death threats and accusations of being a “traitor.” Her family — all Iraqi Muslims — have since had to flee their homeland.
Hollie McKay, Fox News 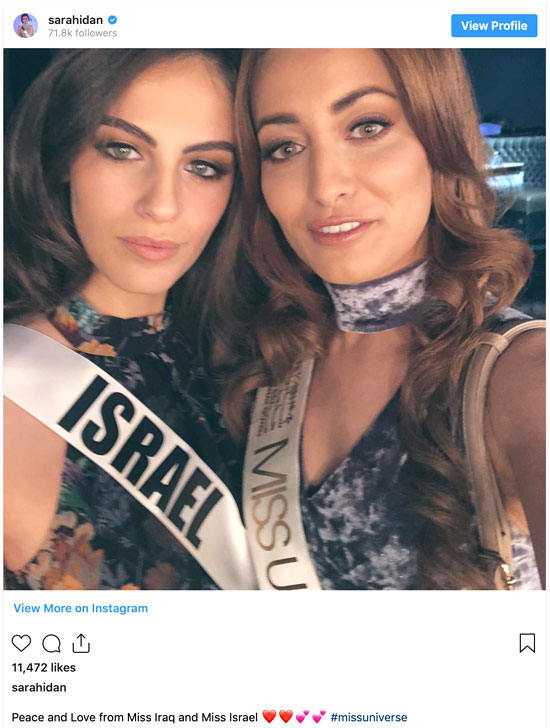 Miss Iraq’s Sarah Idan doesn’t know her own history, as most Americans do not know ours. In Hawai’i, all Hawaiians know the U.S. overthrew their kingdom in 1893. Do you know of this event?

“I’d like to remind Arab countries that today you share more common interests with Israel than the terrorist militias. Negotiating peace for both states isn’t betraying the Arab cause, but a vital step to end conflict and suffering for all.”
Miss Iraq Sarah Idan

The Treaty of Versailles

June 28, 2019 was the 100 Year Anniversary of the Treaty of Versailles. Most Americans have not heard of this. They should. It divided up the collapsed Ottoman empire and created most of the Middle Eastern and African boundaries. Zionists, who are Jews committed to a nation of Israel, were big winners. Arabs were not.

“A lot of the problems we are having to deal with now, I have to deal with now, are a consequence of our colonial past … The Balfour Declaration and the contradictory assurances, which were being given to Palestinians in private at the same time as they were being given to the Israelis — again, an interesting history for us but not an entirely honourable one.”
Jack Straw, British Foreign Secretary (2002)

The Palestinian people are currently being cheated. Israel has attacked nearly every Arab nation — or the USA has attacked them on behalf of the Zionist nation. Iraq 2003 invasion benefited Israel, not the American people. Trump announced U.S. Embassy would be headquartered in Jerusalem. This does not benefit American people.

Israel wants control over Jersualem. Currently it’s an open city for Christians, Jews and Muslims. More fighting will occur if this goes forward. Trump pressures Iran — to force Hamas and Hezbollah to accept the loss of Jerusalem to Israel.

The plan to partition the Ottoman Empire developed in several secret agreements made by the Allies early in the course of World War I: the Sykes-Picot Agreement in 1916.

Britain would control areas between the Mediterranean Sea and the River Jordan, Jordan, and southern Iraq;  France would control southeastern Turkey, northern Iraq, Syria and Lebanon; Russia would receive Istanbul, the Turkish Straits and Armenia.

During the partitioning of the Ottoman Empire, the British civil administration was assigned control over Palestine, which they weakly governed from 1920 until 1948. British supported an increased Jewish presence in Palestine due to 19th-century evangelical Christian beliefs the country would play a role in Christ’s Second Coming.

The letter outlined British support for “a national home for the Jewish people.” This decision created tremendous political conflict, which is ongoing today.

On behalf of the British government, British intelligence officer T. E. Lawrence (aka: Lawrence of Arabia) had promised the establishment of a united Arab state covering a large area of the Arab Middle East in exchange for Arab support of the British during the war.

In the McMahon–Hussein Correspondence, the United Kingdom agreed it would honor Arab independence if they revolted against the Ottomans. Didn’t happen.

The UK and France divided up the area under the Sykes-Picot Agreement. Arabs believe they were betrayed. They believe the creation of Israel was further betrayal.

Discovery of Oil in the Middle East

Britain’s Royal Navy, under Winston Churchill, shifted to oil from coal. The Navy thus became the company’s major consumer and power behind its success. The Iranian people opposed APOC royalty terms, as Iran only received 16 percent of net profits.

In 1933 APOC made an agreement with Reza Shah of Iran to give laborers better pay, greater opportunity for advancement, and pledged to build schools, hospitals, roads and a telephone system. In 1935 APOC changed its name to the Anglo-Iranian Oil Company (AIOC). British promises were not kept.

In March 1951, the Iranian parliament nationalize AIOC and elected a champion of nationalization, Mohammed Mossadegh, as prime minister.

Britain was unable to subvert Mossadegh as embassy officials had been evicted from Iran in October 1952. By successfully exaggerating anti-communist sentiments in the U.S., depicting both Mossadegh and Iran as unstable and likely to fall to communism, the U.S. intervened.

The CIA orchestrated an anti-Mossadeq plan code-named “Operation Ajax.” British MI6 referred to the plan as “Operation Boot.” In August, American CIA bribed politicians, soldiers, and mobs to revolt; while flooding newspapers with propaganda from the British embassy and secret service. This organized riot gave Shah Reza an excuse to remove Mossadegh.

The Shah issued an edict forcefully removing immensely popular and democratically-elected Mossadegh from power. General Fazlollah Zahedi led tanks to Mossadegh’s residence and arrested him. On December 21, 1953, Mossadegh was sentenced to death. His sentence was later commuted to three years’ solitary confinement in a military prison followed by life in prison.

The monarch, Mohammad Reza Shah, reigned brutally for over 25 years protected by his feared secret police, SAVAK, and supported by the U.S. and Britain. In 1979 the Iranian Revolution toppled the corrupt monarchy and prime minister Shapour Bakhtiar ordered the dissolution of SAVAK.

Time magazine ( February 19, 1979) described SAVAK as having “long been Iran’s most hated and feared institution,” which had “tortured and murdered thousands of the Shah’s opponents.”

The Federation of American Scientists also found it guilty of “the torture and execution of thousands of political prisoners” and symbolizing “the Shah’s rule from 1963–79.” The FAS list of SAVAK torture methods included “electric shock, whipping, beating, inserting broken glass and pouring boiling water into the rectum, tying weights to the testicles, and the extraction of teeth and nails.”

The British deceived Arab people to create Israel. The British and Americans orchestrated a coup in Iran to ensure the flow of oil and

Israeli, British and American manipulation of the region since the Treaty of Versailles have created tensions, war and much distress for the world.

Miss Iraq’s Sarah Idan should learn her own history. You should as well.

One thought on “Take a Moment to Learn Your History”