Two White college “hoes” posted videos of themselves yelling and joking about the n-word. Their universities are now launching investigations after other students criticized the pair. The female students ask if it’s appropriate or not for them to sing the slang version of the N-word, “nigga,” since it is used in many popular songs. Black Americans may be upset — but who gave them permission to refer to American women as “hoes”?

These are important questions. Should we be offended? I’ve written previously Americans are not a racist people. The student seeking answers is a sorority leader at William Paterson University. Writing in the Harvard Crimson, Uzochi Nwoko noted the average age of hip hop listeners is the lowest of all major music genres in the U.S. Because of this impressionable demographic, he believes the content of hip hop and rap music has particular potential for impact.

Mr. Nwoko reminds us that along with positive messages in this music genre come more insidious connotations, such as the saturation of rap and hip hop music with misogynistic lyrics that hypersexualize and give little to no respect to women. On Feb. 24th of this year, he says “18 out of 25 of Billboard’s top rap songs — most of which are also classified as hip hop — had lyrics referring to women as bitches, hoes or whores.”

Black Americans are angry about a White ho saying nigga, but say nothing about a rap song such as, “Gummo,” which was number 12 on Billboard’s Top 25 as of Feb. 24th. 6ix9ine raps, “Your girl on my phone / she wanna fuck but … I only want the jaw / that’s really all I use her for as I kick her out the door.” OUCH!!! Black Americans now want to claim the use of nigga is derogatory?

Various media consider the action by the two women to be a “racist and vulgar rant” and triggered an investigation at two separate universities. Media says little about calling women hoes, bitches or whores. The woman, identified as Jasmine Barkley, is a William Paterson University student and member of the sorority, Delta Phi Epsilon. The other female is believed to be a Penn State student.

Clearly the first is a derogatory slur, while the second could be considered a term of respect. Comedian Chris Rock’s routine, Niggas vs. Black People, distinguishes a nigga, which he considers to be a “low-expectation-having motherfucker” from a “black person.” Shakur’s position between nigger and nigga is, “Niggers was the ones on the rope, hanging off the thing; niggas is the ones with gold ropes, hanging out at clubs.” Tupac has been credited with legitimizing the term and explained his song N.I.G.G.A. stood for “Never Ignorant Getting Goals Accomplished.” Why then do officials and other students at the schools consider the behavior of the young bitches, hoes or whores to be disgusting?

Penn State junior Seun Babalola was upset after seeing the video on social media. He claims it’s a “shame that it’s almost becoming normalized.” Initially, he said he let out a little laugh. Consider the irony that Black men have “normalized” referring to women — Black, White, Brown or Asian — as hoes. Consider the irony as well that Black men have “normalized” the use of the term nigga. Seun, why are you really upset?

“Quite frankly,” Seun says, speaking on behalf of a “lot of people, especially students of color,” we’re “really tired of a lot of these incidents, really tired of seeing these videos get blatantly posted — knowing full well that they’re acts of racism, acts of hatred.” How is singing along to a song hateful? The more honest question is why does Black culture refer to women using misogynistic slurs?

White people didn’t create the term nigga. Black hiphop artists did. Wikipedia points out one of the earliest uses of the term in a popular song was the 1983 song New York New York by Grandmaster Flash and the Furious Five, although the word had featured in some earlier hip hop recordings such as Scoopy Rap and Family Rap, both from 1979. Ol’ Dirty Bastard uses the term 76 times in his Nigga Please album (not including repetitions in choruses). Here are some other uses of nigga in hiphop culture.

Thus, the two White female college students pose a legitimate social question. Is it appropriate for her to sing nigga if it’s in a song?

This is the chorus of Jay-Z’s song, Jigga that nigga.

Jay-Z profits off the term nigga. He sells millions of copies of his songs — mostly to young White American males. He also raps about being high all day “like Rastafari’s do.” Isn’t that cultural appropriation? He asks Red Rover to send “your hoes over,” because he’ll leave her on wet bedsheets, as his sex is so explosive. Graciously respectful of women, Jay-Z! Didn’t Michelle and Barack Obama fawn over Jay-Z during their eight years in the White House? Jay-Z raps:

“He did it again!” Haters no like
But they gotta fuck with it cause the flow’s so tight
Gnarly dude! I puff Bob Marley dude
All day, like Rastafari’s do
Now I’m stuck to the point I could hardly move
You fuckin’ up my high, don’t bother me dude
But Red Rover, send your hoes over
She can do whatever, sip somethin’ with soda
She can leave whenever, sip somethin’ with Hova
We can play however, sleigh bed or sofa
And the prognosis, sex is explosive
Left her with wet bedsheets, nigga I’m focused

Sex, drugs, misogyny and hiphop rap. Black people and the political Left do not have a problem teaching these behaviors to America’s children and teens. But they freak out when “White hoes” or should we say, “White bitches,” use the term. Seun continues, “The fact it is happening within fraternities and sororities especially is really — it really makes you question what the culture is within those fraternities and sororities that are predominantly White as well.” Shouldn’t Seun ask why these terms are popularized in Black culture?

Mr. Babalola claims these incidents make it very difficult to recruit students of color, retain students of color, recruit faculty of color and all these things that we would love to have. If so, why doesn’t he demand Black people stop using the speech? He believes “this word was used in terms of oppression, in terms of breaking people down for centuries, for so long, by the same people who insist on using it and insists on saying that it’s their right to use it, and that in a sense is just really mind-blowing to me.” Actually, Mr. Babalola is confused. Nigger was a derogatory term applied to Black Americans for centuries. Nigga is about 40-years old and furthered by African Americans.

He leaves viewers, “At the end of the day, that shows there’s still work that has to be done. People need to know that the work towards social justice equality, equity is not over.”

Jasmine Barkley, the embattled coed, had this to say in defense of her actions, “I am not a racist. I believe in equality and respect among al. The videos have been misconstrued in many ways across the media …” 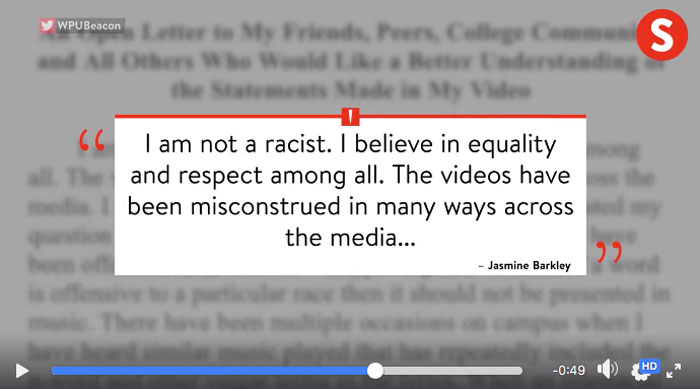 Ms. Barkley added, “The Black race has been fighting against segregation for a long-time, yet the divide of who can use the n-word only creates more segregation.” 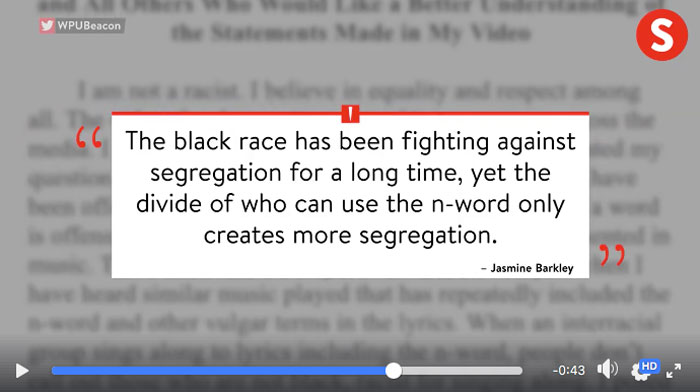 OK, my niggas, bitches and hoes, thanks for stopping by. What do you think? Please leave your comments below and be sure to FOLLOW ClearHeath Life Strategies. We provide News of the News You Wish You Knew.

5 thoughts on “Not Racist for Hoes to Sing Nigga”